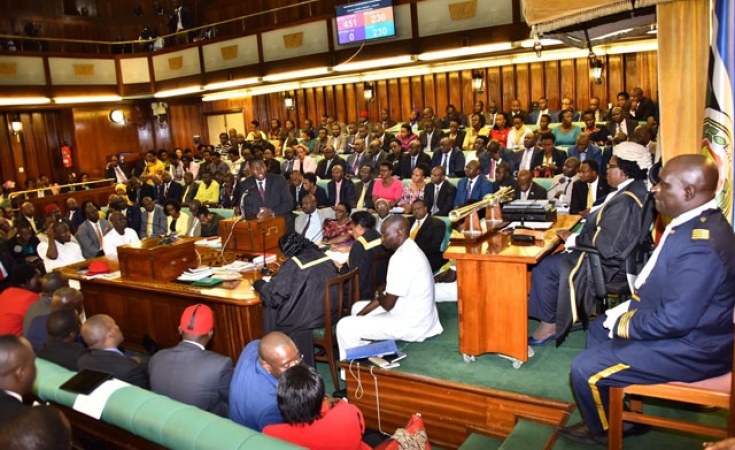 MPs in Uganda have been offered 20 million Ugandan shillings each (nearly €5000 euros) to assist them during the coronavirus pandemic. The move has sparked outrage from the public who say the money should go to help health workers on the frontline of the Covid-19 fight.

Ugandans protested from their homes on Monday night with cooking pots and jerry cans against a parliament decision to grant MPs 10 billion Ugandan shillings UGX (€2.4 million euros) as the country scrambles to bring the Covid-19 € under control.

The "Black Monday" protest at 8pm local time (6pm GMT) was scheduled after a dusk-to-dawn curfew to contain the disease. The banging sounds echoed the daily rounds of applause that have been fired from various cities around the world in tribute to frontline health workers.

Mao told the Daily Monitor it is "repugnant" that "MPs are paying themselves when frontline staff are strapped for cash."

Uganda's speaker of parliament Rebecca Kadaga has defended the move, saying the money would be used to support MPs in managing the coronavirus response in their constituencies. The country has more than 400 lawmakers.

On Shs10 billion allocated to Parliament: We have ambulances commandeered by Ministry of Health. The drivers have to be paid & ambulances serviced. MPs are also busy on advocacy. Committees are following up on what is happening in hospitals & they are reporting to the country. pic.twitter.com/rBIFGAFVZd

Kadaga has claimed that the MPs' bonus is part of a supplementary budget that was passed last week to fight Covid-19. The money will help them pay drivers and ambulances transporting patients.

Jonathan Odur, an opposition MP from the capital Kampala was at the budget vote on 7 April and told RFI the 10 billion UGX payout for lawmakers was decided unilaterally behind the scenes.

"The report that was submitted to us never mentioned any proposal to give members of parliament 10 billion shillings," he said.

"When we reached the floor of parliament, the chairman of the budget committee sought to amend some of the figures that he had presented in his report. And that's where the trouble started from," he told RFI.

"There was a scheme to use the emergency under Covid-19 to defraud the nation."

Odur claims that he and his colleagues were tricked into agreeing to deduct 10 billion UGX from the health ministry's meager 104 billion Covid-19 budget.

On Monday, he and another lawmaker Gerald Karuhanga, petitioned the High Court to overturn parliament's decision and block the money being transferred into their accounts.

Uganda has so far recorded 55 cases of Covid-19 but no deaths. Experts fear that the health system could be overwhelmed if the virus hits hard.

Health workers are grappling with a scarcity of ventilators and protective personal equipment.

The health ministry had requested a budget extension of 400 billion Ugandan shillings to fight against the spread and treatment of the virus, as well as other diseases, but received just a third of that amount.

"The 10 billion for us MPs is way short of what the health sector needs, but if anyone should have received the money it should have been the health ministry," reckons Odur.

The money is expected to be paid to MPs this week, but Odur says he will give it back if it comes.

"I don't intend to use it for any purpose on myself. At the moment, we are trying to see if there is a possibility to block the payment."

For him, public pressure is key.

"I properly understand the outrage. And I think that it is for the good of the country that the population and the public keep a keen eye on what happens in parliament to pressure it to act in a different way," he said.

Ugandan officials have often come under scrutiny in the past for misusing state funds.

Odur claims he turned down an offer of 29 billion Ugandan shillings (around €7 million euros) in 2017 to vote in favour of scrapping the 75-year age limit for the country's President Yoweri Museveni, allowing him to run again in 2021.

Contacted by RFI for comment, parliament speaker Rebecca Kadaga declined our request for an interview.

Uganda Govt Orders Two-Week Lockdown as COVID-19 Cases Rise
Tagged:
Copyright © 2020 Radio France Internationale. All rights reserved. Distributed by AllAfrica Global Media (allAfrica.com). To contact the copyright holder directly for corrections — or for permission to republish or make other authorized use of this material, click here.