South Africa: Is It Legal to Evict Anyone During Lockdown? No, Say Legal Experts 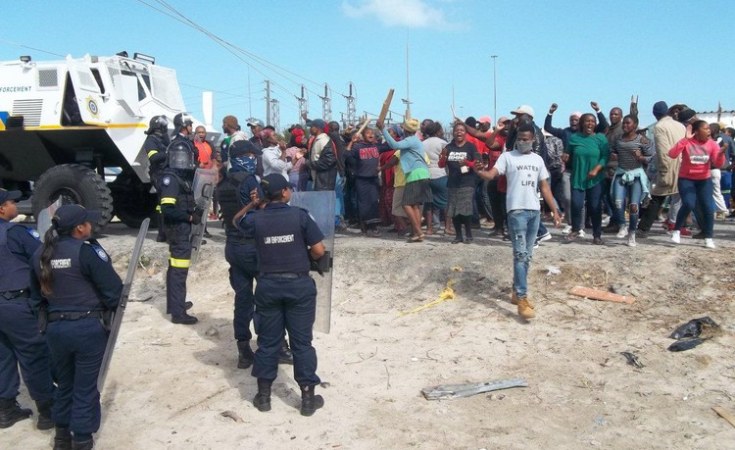 Evicting people from their homes during the national lockdown against the spread of Covid-19 is an offence and should be punishable by a fine or imprisonment.

This is the view of legal experts amid the eviction of land occupiers in Lawley outside Ennerdale at the weekend.

News24 reported the Red Ants had demolished scores of shacks and houses in Lawley on Saturday, leaving many people homeless. They returned on Tuesday to continue demolishing structures.

This has led to a public outcry and has prompted Gauteng Human Settlements, Urban Planning and Cooperative Governance and Traditional Affairs MEC Lebogang Maile to clarify the actions of the City of Johannesburg at a briefing on Tuesday.

The government has made it clear that no evictions would be allowed for the duration of the lockdown "regardless of whether it is a formal or informal residence or a farm dwelling".

But the issue of illegal land occupation during the lockdown could equally not be tolerated, Maile said on Saturday.

Following criticism, he said on Tuesday the destroyed structures were "actually new structures that were not occupied by anyone".

This is an important consideration when it comes to the legality of destroying dwellings that are already occupied.

According to advocate and former judge Anna-Marie de Vos SC who specialises in socioeconomic and land rights litigation, there was a difference between stopping land invasions and evicting people from their homes.

"If you are in the process of invading land, in other words you're putting up your structures and materials, that is invasion, and that can be stopped without a court order. That is called counter-spoliation. Spoliation is the concept of taking the law into your own hands.

"The argument of the municipality is that the [land occupiers] are spoliating - in other words, they're taking land unlawfully, and therefore you can stop them with a counter-spoliation action."

But, said De Vos, there was a thin line between invading land and already living on it. "The test would be: Do they already sleep there? Are their possessions there? Do they cook there?

"Once that has been established - even if it's just for a day or two - then people can't be evicted. But if they're still in the process of erecting buildings, then you are entitled to do that because it's not an eviction you are stopping a land invasion."

She added she had dealt with many cases where people have been evicted, even though it was clear from examining their dwellings they lived there - indications such as curtains, mattresses or cooking equipment. "That is not allowed."

According to her, the situation under the lockdown made it exceptionally difficult for NGOs to determine the merits when it came to evictions, because of restrictions of movement and gaining access to the courts.

According to Louise du Plessis, the head of the land and housing programme at Lawyers for Human Rights, once people have occupied structures such as shacks, municipalities have to bring a court application to evict them, and the current lockdown regulations did not allow for that.

"Destroying homes where people already live is illegal. There is no way people can be evicted if they already live in those structures - not without a court order. For now, the government cannot touch them. They can bring an application after the lockdown and have them evicted then."

What is the legal recourse for evictees?

Du Plessis said if it could be proven that people have been living in their structures, even for a short time, removing them was unlawful.

She echoed what De Vos said, adding it was impossible to get a case number without consulting with people, which was restricted during the lockdown.

"Anyone evicted unlawfully during the lockdown will have a good case to take to court on an urgent basis to go back to where they were," said Du Plessis.

"Civil society - such as Lawyers for Human Rights, the Legal Resources Centre and Socioeconomic Rights Institute - should be able to access these people and assist them," said De Vos.

"Second, NGOs, which specialise in social matters, should engage with the government - especially on municipal level - to stop them from illegally evicting people. If what I'm seeing is an illegal eviction and not merely stopping a land invasion, it's a disgrace."

On Tuesday, Maile said, subsequent to the demolitions in Lawley, "we had engagements with the mayor of the City of Johannesburg seeking clarity on the matter and he explained that the structures that were demolished were actually new structures that were not occupied by anyone".

"What happened at Lawley last Sunday, was that we had planned a visit to the area along with the mayor of Johannesburg in order to undertake an assessment of the situation on the ground following the demolition of incomplete and unoccupied structures.

"These structures were demolished to prevent land invasions," Maile said, adding the land was unoccupied.

On Sunday, the chairperson of the Portfolio Committee on Human Settlements, Water and Sanitation, Machwene Semenya, raised concerns over alleged evictions carried out by municipalities in Durban, Lawley in Johannesburg, and Cape Town.

In a statement, Semenya said the evictions were "unfortunate and inappropriate", especially during the lockdown that was declared by President Cyril Ramaphosa to curb the spread of Covid-19.

"The evictions glaringly diminish the intentions of the lockdown and expose already vulnerable people to Covid-19 and other harmful elements such as crime and rainy weather.

"When the president and the executive announced that there will be no evictions, we understood that those instructions would be respected by all.

"It is therefore unacceptable that municipalities have undermined the spirit of the lockdown and have shown clear disdain and lack of empathy for the people, especially the poor," Semenya said.

"We urge the municipalities to desist and refrain from any planned evictions henceforth, and to abide by the regulations."

Semenya cautioned against the illegal occupation of land by communities; however, due to the lockdown, she said she hoped there would be no evictions.

"Illegal occupation of the land undermines the law of the country and should not be tolerated."

On Monday, the City of Cape Town said it had delivered material to 49 households who illegally occupied a piece of land in Khayelitsha so as to adhere to the interim court order for temporary relief to these illegal occupiers during the remainder of the Covid-19 crisis.

The court will assess the merits of the case after the lockdown ends.

How Nation Can Feed Its Hungry Children During the Lockdown