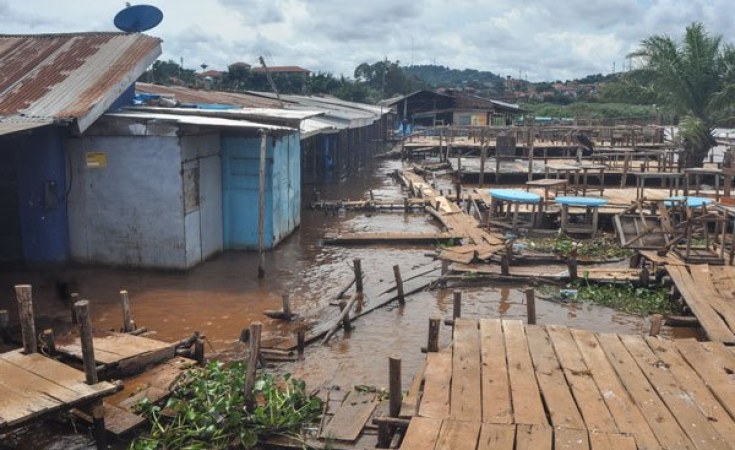 In Kisumu County, residents of lower Nyando are fearing for their lives after River Nyando broke its banks and submerged over 50 per cent of Ahero shopping centre, stretching to Lela area along the busy Kisumu-Nairobi highway.

Residents said the floods are the worst in the region in many years.

In Nyalenda slums, an outbreak of waterborne diseases looms after several homes were marooned by flood waters occasioned by Lake Victoria backflow.

"The coronavirus is the least of our concerns right now; our main worry is what we will eat and the likelihood of waterborne diseases outbreak," said Mr Dan Odhiambo, a Dunga resident,

In Siaya, close to 100 families have been displaced by the raging waters which have affected Lake Victoria beaches in Bondo, according to area deputy county commissioner Tom Macheneri.

In West Ugenya, the entire Sifuyo West sub-location along River Nzoia -- which has burst its banks -- are affected by the floods. Some 800 people from the estimated 95 households have fallen victim to Mother Nature's fury.

"The rising lake levels remain a huge concern as it's submerging adjacent arable lands. All our islands and beach facilities like bandas are all under water. Oyamo, Ndeda, Mageta and virtually all beach sites are no more," Dr Ochanda said.

In Elgeyo Marakwet and West Pokot counties, residents of Kipchumwa location near the landslide-hit Chesegon were yesterday struggling to come to terms with the possibility of losing 26 people to the flash floods and landslides that hit the area last Saturday.

Embobut/Embolot MCA Paul Kipchumba said 10 pupils from Mungwo Primary School, four from Cheptany primary, one from Chemisto primary and one student each from Kipkaner and Tot secondary schools have so far been reported missing.

By Wednesday, only three bodies had been found and 23 still unaccounted for.

The government deployed Kenya Defence Forces soldiers to search for the missing as local leaders appealed for humanitarian support for the over 4,000 people displaced by the floods and mudslides.

In South Rift, several people have been killed by floods.

In Samburu, two people -- a six-year-old boy and a man aged 30 -- died on Tuesday evening in Illaut area.

In Laikipia, a 71-year-old man died after he was swept away by flash floods while trying to cross River Sabugo.

Several people have also perished in Kericho and Baringo counties.

In Naivasha, Deputy county commissioner Mbogo Mathioya is urging families living near the shores of Lake Naivasha to move out. Several roads leading to at least three estates in Naivasha town have been washed away by floods.

In Nyandarua, County Commissioner Boaz Cherutich has ordered about 400 families at Gachuha village in Kipipiri living along the banks and hilly areas prone to landslides to move to safer grounds, after River Turasha burst its banks on Tuesday night.

In Taita Taveta, over 27 families were left homeless after their houses were destroyed by landslides in Wundanyi.

In Mombasa, slum dwellers living on the shores of the Indian Ocean are now living in fear after their houses were flooded following heavy rains.

At Muoroto, residents said their houses were partially submerged by the rising tide. "We are living in fear after we woke up to a pool in our houses. With the rains pounding Mombasa, things will be dire. We are appealing for help," said Ms Jecinta Mweu, a resident.