African airlines are struggling amidst the coronavirus lockdown as demand has evaporated since measures were put in place across the globe to halt the spread of Covid-19. Air Mauritius became the latest victim of Covid-19 as the company's board of directors announced on Wednesday that the carrier would be put into voluntary administration.

"Unfortunately, travel restrictions and the closure of borders in all our markets and cessation of all international and domestic flights in an unprecedented crisis, has led to a complete erosion of the company's revenue base," said a statement from Air Mauritius.

Trading in the company was suspended on Mauritius' stock exchange and the company appointed administrators. Air Mauritius started flying in 1967 and served 22 destinations on four continents, according to the company's website.

Namibia's flag carrier Air Namibia said on Wednesday that it was having cashflow problems, according to local media reports.

Air Namibia would be delaying the payment of salaries of some 700 employees by a week, The Namibian reported. The carrier has suspended its operations until 5 May, but is continuing to offer cargo services, according to its website.

Kenya Airways has pivoted its service to cargo and converted four of its passenger aircraft to lessen the impact of Covid-19 and increase its freight capacity. It has already started to transport fresh produce, including vegetables, to Europe using the converted widebody aircraft.

Destinations in Europe served by Kenya Airways have been suspended until at least 6 May, while cities served by the Kenyan carrier in China, India, Thailand and Dubai will also not resume until May.

The state-owned carrier is facing revenue losses of 508 million euros from January to April and might need to secure outside financial help if the crisis lasts for another three more months, Tewolde said.

Ethiopian Airlines, like Kenya Airways, is looking towards cargo to help sustain operations. It had 12 cargo planes and is using an additional 10 to 15 passenger jets to increase the capacity, according to AFP.

Another bailout for SAA?

South African Airways last week went cap in hand to the government, requesting 485 million euros in funding. SAA like other airlines has seen its operations dwindle over Covid-19 measures.

"This is an enterprise that in the past three years has consistently and inexplicably missed every reporting deadline as prescribed by the Public Finance Management Act," said Adrian Saville of Cannon Asset Managers. "In this environment, it is an extraordinary ask," he added.

The aviation industry in Africa contributes 51.5 billion euros to the continent's economies and supports 6.2 million jobs, according to the International Air Transport Association. 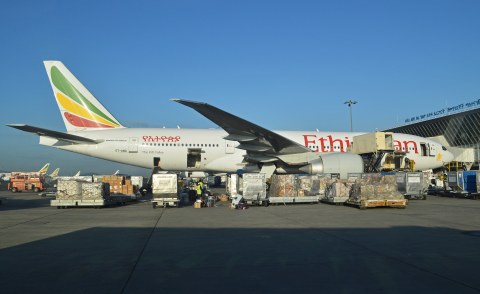 Tanzanian Fresh Produce Flown to Europe By Ethiopian Airlines
Tagged:
Copyright © 2020 Radio France Internationale. All rights reserved. Distributed by AllAfrica Global Media (allAfrica.com). To contact the copyright holder directly for corrections — or for permission to republish or make other authorized use of this material, click here.