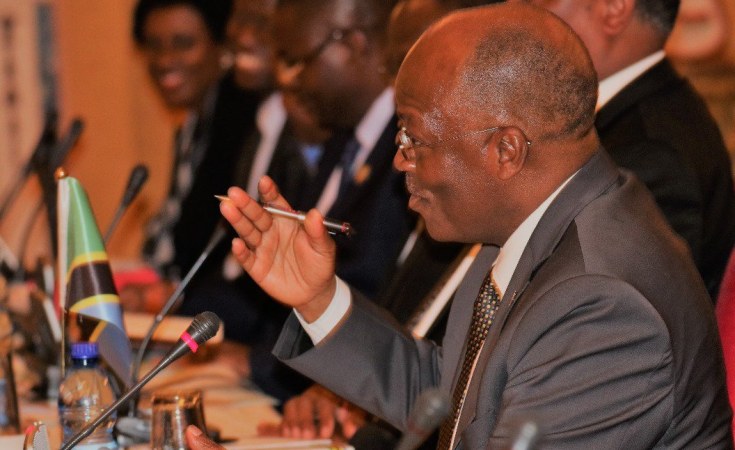 AS the battle against Covid-19 intensifies, President John Magufuli yesterday issued a number of directives, including ruling out locking down Dar es Salaam, which happens to be the epicenter of the virus, and insisting on the need to release information on the number of patients who recover from the disease.

He hinted that locking down Dar es Salaam, which is the country's commercial capital, the busiest and most densely populated with around six million people, would be most inappropriate.

He instead emphasized on taking precautions, necessary preventive measures and heeding to advice and directives issued by the government and health professionals.

He was addressing the nation through the heads of security organs in Chato District, Geita Region.

The Head of State said he is aware that more than 100 people have already recovered from the disease and that such information must be released to the public.

As of yesterday, the number of confirmed cases stood at 284 with the death toll standing at 10.

"I have made some changes in the Ministry for Health, Community Development, Gender, Elderly and Children by moving the Permanent Secretary to another ministry; I believe things will now change," he said.

Other directives issued by President Magufuli include banning chlorine fumigation in buses and some parts of cities, saying the exercise does not help to kill coronavirus.

He also directed the health ministry to take precautions by examining the quality of all equipment, including protective gears that are offered or shipped in the country.

He said there is a possibility that some of the gears are used to fuel the spread of the disease.

"There has been a debate on such equipment from various parts of the world; We need to be very careful, we must understand that in this process our people can end up getting infections through such equipment; Our experts must be careful," he noted.

The Head of State tasked the ministry concerned and all security organs to make sure whatever is brought in is safe and meet the required standards.

"You must investigate the kind of chemicals that were used for spraying in Dar es Salaam and other areas and all those who were involved in the process must be investigated as well," he said.

President Magufuli commended the public for standing firm in the fight against the deadly virus, saying some have already started to make facemasks by using available materials.

He asked local factories to increase the production of facemasks and other protective gears so that the country can use its own resources to fight the scourge.

He asked local factories to manufacture ventilation machines, protective gears for health service providers and the public at large.

"With the grace of God, we are going to win this battle against the virus; Let us fight together; We must produce our own protective gears to avoid depending on importing everything from abroad," he said.

He also advised the Ministry of Health to consider the time for quarantining people in the allocated areas, including those at Magufuli hostels, saying those who stay there for a long time without showing any symptoms should be released to save the resources for others.

"Let's use such resources for others instead of keeping people who are in good health," he noted. He also directed health experts to research on traditional steaming, which he said could have a positive impact and great relief to patients.

He said some people are not even Tanzanians but they use the ongoing problem to threaten people.

He also warned politicians to stop using Covid-19 to gain political mileage. "We must avoid threatening people, not all the deaths are caused by Covid-19 in this country, we still have malaria and other diseases, this is the time for standing together as a nation," he said.

On international support, the Head of State asked international lenders, including the World Bank, to consider scrapping debt or offering relief for Tanzanian government and other African countries at this time when poor countries are fighting coronavirus.

"We are paying around 700bn/-every month to various international organisations; I am therefore asking for these organisation especially the World Bank, to consider supporting us by scrapping our debt or offering us a relief," he said.

Moreover, President Magufuli extended his wishes to all Muslims across the country who are about to start observing the Holy Month of Ramadan.

Stressing that they should use the holy month to pray to God to save the nation from the deadly virus.

WHO Speaks on Traditional Medicine Use for COVID-19
Tagged:
Copyright © 2020 Tanzania Daily News. All rights reserved. Distributed by AllAfrica Global Media (allAfrica.com). To contact the copyright holder directly for corrections — or for permission to republish or make other authorized use of this material, click here.