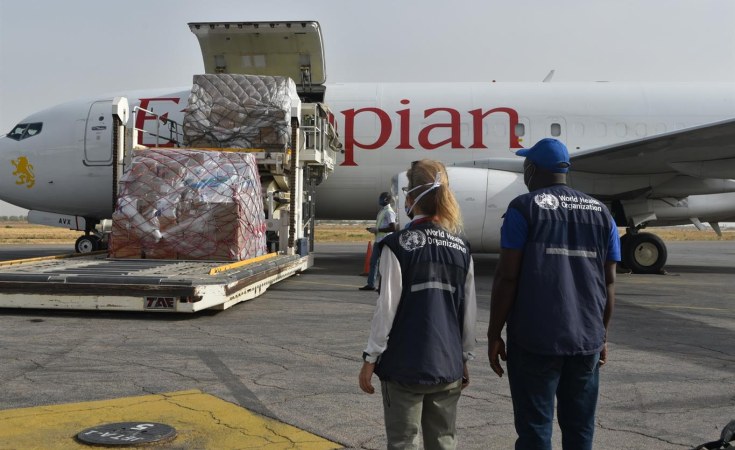 WHO
In normal times, WHO fulfills country requests by placing orders through long-term contracts with vendors who ship cargo via freight forwarders. The COVID-19 pandemic turned the process upside down.
World Health Organization (Geneva)

"You can pray only if you are alive," quips Abdallah Cissé Djiguiba, one of the grand imams in Cote d'Ivoire. Several African countries have banned gatherings and locked down cities and towns to suppress the spread of COVID-19. With places of worship shut, virtual platforms are not just linking churches and mosques with their congregation but providing space to convey health and safety messages on the virus.

In Cote d'Ivoire, gatherings were banned and movement restricted on 16 March. Two days later the country's council of imams closed mosques, a move that 62-year-old imam Cissé said was not without pain. Friday prayers and major religious events draw up to 6000 congregants at the Salam Mosque in Cote d'Ivoire's commercial capital Abidjan where he leads sermons. "We understood that we have to preserve lives. Praying at home also has its meaning and importance," he notes.

"The decision to close mosques was a huge surprise for many among the faithful. It's a significant disruption of people's way of life and habits and it's a measure that causes behaviour change," says the imam who features regularly in the government's public health education campaigns: appearing on television and speaking on radio about COVID-19 safety. "In Africa it is difficult to tell people to stop hand-shake greetings. It's even more difficult in places of worship. It's our way. But I think with time people can understand."

In downtown Nairobi, Jamia Mosque, the Kenyan capital's biggest mosque, has been shut since March. Sheikh Ibrahim Lethome, the head of religious affairs at Jamia, says that closing doors to worshipers for the first time in 95 years of the mosque's history was crushing. "Many broke down and cried including myself, but we had to make that decision."

Many of these closed institutions have found ways to reach their worshipers, relaying services and information on how to protect themselves from the virus. One of the oldest churches in Nairobi, Christ Is the Answer Ministries (CITAM), runs television, radio and online broadcasts reaching around 200 000 people on Sundays.

"We encourage people to wash their hands, sanitize, to keep distance, stay at home. This way we are able to help the government to achieve its objective of stopping the transmission of the virus," says Bishop David Oginde of CITAM.

The World Health Organization (WHO) in Kenya is collaborating with faith organizations through the Ministry of Health to bolster outreach to communities on health education and safety about COVID-19. Working with health experts, the Muslim community has established guidelines on safe burials.

"We encourage and support the efforts of the faith communities in the fight against coronavirus," said Dr Rudi Eggers, WHO representative in Kenya. "We work with their leaders because they are major stakeholders with credible links and influence among communities."

Governments across Africa have stepped up measures to stem the spread of COVID-19. Disease surveillance and testing are being ramped up as the virus spreads beyond capital cities to provinces and regions. WHO has called on countries in Africa to decentralize and bolster subnational emergency response to tackle the virus.

With movement and gatherings largely cut due to stringent containment measures, imam Cissé in Cote d'Ivoire prayers within families has been enhanced. "Surprisingly we are seeing some good outcomes. Previously it wasn't easy to gather the whole family for prayers at home. With COVID-19 everyone come for prayers on time with several family members attending."

"When there is a pandemic, it concerns everybody. We need to learn more about this disease to find ways to stop it."

As Muslims are set to begin observing the holy month of Ramadan, WHO has issued guidance on safety such as practicing physical distancing, use of culturally and religiously sanctioned greetings that avoid physical contact such as waving, nodding or placing the hand over the heart. People who are unwell or having any COVID-19 symptoms or older people with pre-existing medical conditions are urged to avoid attending events and gathering.

"Preservation of life precedes everything else," says Sheikh Lethome.

Previous Story
Tagged:
Copyright © 2020 World Health Organization. All rights reserved. Distributed by AllAfrica Global Media (allAfrica.com). To contact the copyright holder directly for corrections — or for permission to republish or make other authorized use of this material, click here.