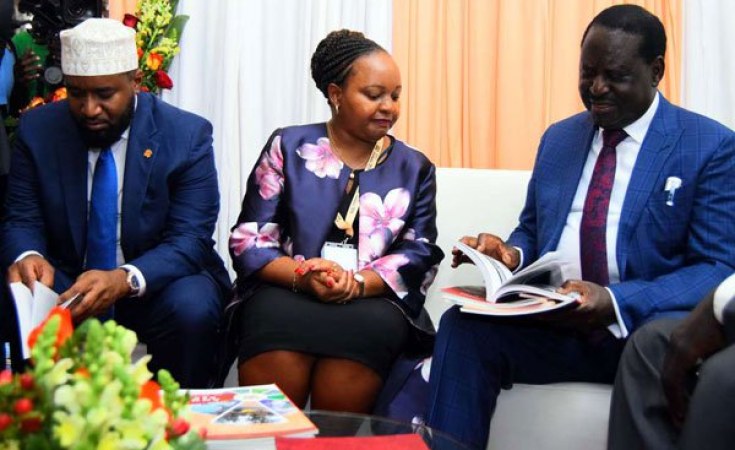 It may well have been a "mere" protest gesture over leadership changes in the ruling Jubilee Party but the move by 146 Members of Parliament to act in solidarity with Deputy President William Ruto last week has ultimately persuaded the legislators to flex political muscle in Parliament.

Buoyed by the numbers, which according to the DP represent 70 per cent of the party's elected MPs, the party's Deputy Secretary-General, Caleb Kositany, Senate's Majority Whip Susan Kihika and Gatundu South MP Moses Kuria have already hinted at a party takeover plot owing to President Uhuru Kenyatta's failure to call for a National Executive Committee meeting to iron out some of the underlying hitches.

Speaking last Friday after the Registrar of Political Parties (RPP) Ann Nderitu suspended the execution of changes in Jubilee's leadership upon receipt of over 300 written objections, Mr Kositany boasted of "numbers" at their disposal.

Vowing that nothing will stop the Ruto-friendly MPs "from taking charge of the situation", the Soy MP said they would soon convene a Parliamentary Group meeting with a view to charting a way forward.

Reached for comment, National Assembly Majority Whip Benjamin Washiali explained that the hardening of positions among the emerging camps within Jubilee was partly due to threats by colleagues allied to the president to kick them out of parliamentary leadership.

He vowed to "teach some people a political lesson". "We are not scared of a face-off. And if that is what they want, then we are ready to defend ourselves. After all, we are the majority. And of the party's parliamentary leaders, only Jimmy Angwenyi did not submit a objection letter to the registrar," said the Mumias East MP.

Mr Washiali, however, explained those who submitted the protest notes did so to challenge the manner in which the leadership changes were made, but that the move does reflect the individual lawmakers' disapproval of President Kenyatta.

Indeed Nyeri Town MP Ngunjiri Wambugu, one of the vocal legislators allied to the pro-Kenyatta Kieleweke wing of Jubilee, concedes that the DP currently enjoys support of majority MPs "if the objection letters to RPP are anything to go by".

"Ruto was probably going to succeed in the Jubilee takeover plot during the party's grassroots elections scheduled for last month, but his plans have flopped courtesy of the breakout of the Covid-19 pandemic," said Mr Wambugu, referring to the party's polls that have now been postponed.

"Admittedly, the DP had done a lot of groundwork -- thanks to his premature campaigns across the country -- and he may have just pulled a surprise coup. But this is not going to happen now because those of us aligned to the party leader are back to the drawing board and have something up our sleeves," the MP told the Sunday Nation.

Since the symbolic Handshake between President Kenyatta and his bitter political rival, Orange Democratic Movement (ODM) leader Raila Odinga, in March 2018, cracks have emerged between the president and his deputy, with Mr Ruto claiming Mr Odinga's mission is to destroy the ruling party.

And despite repeated denials over the growing rift between them, the reality has become uglier and clearer by the day.

The tensions between the two camps boiled over last week when a group allied to the president, in a Gazette Notice dated April 6, quietly attempted to effect changes in the membership of the party's National Management Committee (NMC) by bringing on board individuals perceived to be Kenyatta-friendly.

This sparked a series of protests by the DP and party members allied to him. And in a clear show of political might, the DP quickly tweeted that 146 elected Jubilee MPs and Senators, accounting for 70 per cent, had "rejected the fraudulent and illegal attempted changes by heartless gangsters taking advantage of the Covid-19 (pandemic) when Kenyans are anxious about their health and survival".

According to political scientist Richard Bosire, the DP was sending a coded message to the president that he controls only 30 per cent of the party and that the battle for supremacy was far from over.

"By exhibiting these numbers, Mr Ruto was telling his party boss that he may win this one at the registrar's office but with a warning shot that the battle ahead lies in parliament, where he enjoys relative majority," says Dr Bosire, who teaches at the University of Nairobi.

The political affairs commentator, however, fears that the approach of the DP - "where he is digging in instead of seeking reconciliation" - will only draw the two leaders further apart.

"If his (Ruto) aim is to fight off Raila's interference in Jubilee and infiltration in state affairs, then I am afraid he is quickly achieving the opposite. He is succeeding in making Uhuru insecure, and therefore, emboldening the Uhuru-Raila pact, where the ODM leader is the solution to the President's insecurities."

But as Uasin Gishu County Woman Representative Gladys Boss Shollei notes in a video clip that is doing the rounds on social media, the DP is alive to the fact that he has allegedly been betrayed by the president and is accordingly confronting the situation politically "the best way he knows how".

And according to Kimilili MP Didimus Barasa, the defiance, hostility and stubbornness exhibited by Ruto-allied MPs towards the president is deliberate.

It is aimed at persuading, if not compelling, the president to the negotiation table. With the advantage of numbers on their side, the MP believes they can make the president's life in Parliament fairly rough and uncomfortable and thereby force dialogue.

But Dr Bosire regards this as a wrong strategy. "It will not work because the government is not foolish enough to offer politically partisan proposals for discussion in Parliament. It will sponsor only proposals that are pro-people, where no legislator will stand in the way.

Secondly, one is only forced to the negotiating table if they lack options; in this instance Uhuru, has plenty and I doubt he will be reaching out to Didmus and the lot. They are the ones to seek him out."

Mr Wambugu similarly argues the numbers may not count considering the additional support the president now enjoys from the opposition, particularly ODM, and the fact that "we do not vote as Jubilee but rather with the conscience of the weight of issues at hand".

The National Assembly's majority whip separately points an accusing finger at Kieleweke-allied MPs for poisoning relations between their party leaders.