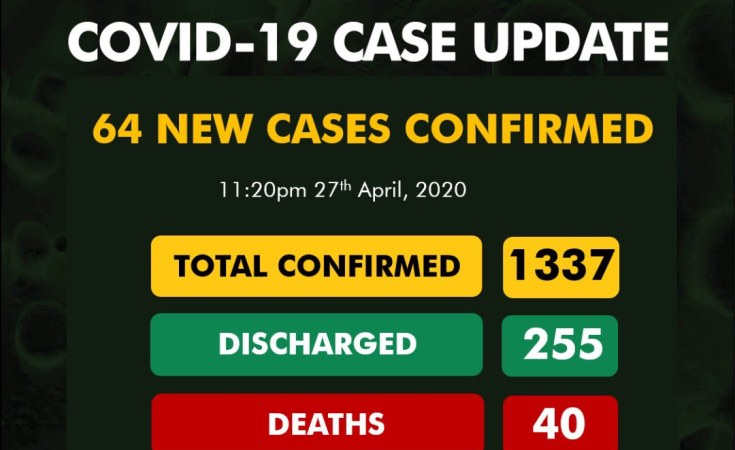 Nigeria Centre for Disease Control, on Monday, announced 64 new cases of COVID-19 in the country to take the total number to 1337.

Monday's figure is a decrease in figures recorded in the past few days.

Breakdown of the new cases shows that 34 were reported in Lagos, 15 in FCT, 11 in Borno and two each in Taraba and Gombe states.

Also, 255 patients have been discharged while 40 deaths have been recorded.

Meanwhile, the NCDC said a case previously reported for Lagos is now reported for the FCT, resulting in change in total number of cases for the two locations.

The total number of confirmed cases in Lagos is now at 764 and 157 in FCT pic.twitter.com/TefRI8igot

President Muhammadu Buhari had eased the lockdown in the Federal Capital Territory, Lagos and Ogun States, effective from Monday, May 4.

The lockdown was imposed on March 29 as part of measures to halt the spread of COVID-19 in the country.

Buhari in a national broadcast on Monday, announced that he had approved gradual easing of the lockdown measures.

He said: "I have approved a phased and gradual easing of lockdown measures in FCT, Lagos and Ogun States effective from Monday, 4th May, 2020.

"However, this will be followed strictly with aggressive reinforcement of testing and contact tracing measures while allowing the restoration of some economic and business activities in certain sectors."

Nigerians Throw Caution to the Wind as COVID-19 Lockdown Eases
Tagged:
Copyright © 2020 Daily Trust. All rights reserved. Distributed by AllAfrica Global Media (allAfrica.com). To contact the copyright holder directly for corrections — or for permission to republish or make other authorized use of this material, click here.