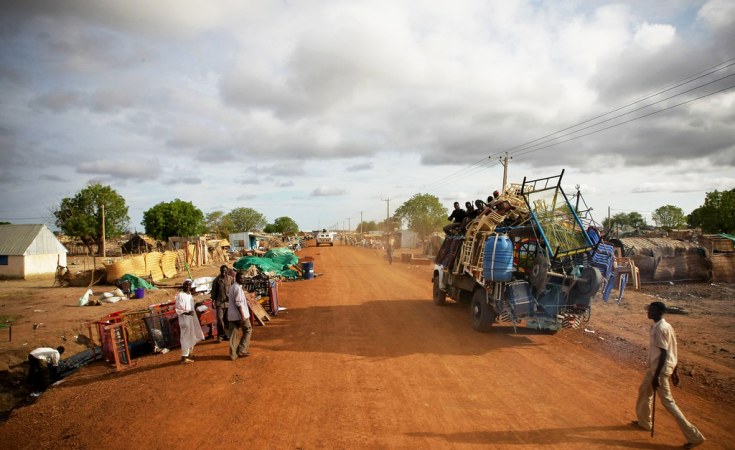 Stuart Price/UN Photo
The area of Abyei, on the border between Sudan and South Sudan, has been disputed since 2011.
UN News Service

Sudan's efforts to stop the spread of the COVID-19 pandemic, are delaying the deployment of fresh United Nations police units in Abyei and the border regions between Sudan and South Sudan, the UN's peacekeeping chief told the Security Council on Tuesday

Jean-Pierre Lacroix, Under-Secretary-General for Peacekeeping Operations, updating the Council on the work of the UN Interim Security Force for Abyei (UNISFA), said at the local level, the security situation remains volatile. The mission is mandated to protect civilians and humanitarians operating in the area.

He pointed to rising tensions between the pastoral Ngok Dinka and nomadic Misseriya communities, as well growing criminality and the presence of armed elements, including some that have exchanged gunfire with UNISFA troops.

Despite improving relations between Sudan and South Sudan, he added, it is very unlikely that progress will be made in determining the final status of the disputed territory that is administered in effect, as part of both States, given that the African Union Commission and the African Union's High-Level Implementation Panel are stretched dealing with other priorities.

Against this backdrop, Mr. Lacroix said that the deployment of three formed police units is facing "serious delays" due to travel restrictions that the Government of Sudan put into place to combat the novel coronavirus.

"The process for deployment of the first identified FPU from Ethiopia was well advanced by early March with the completion of the pre-deployment visit to the Mission area", he told Council members, meeting via video-teleconference.

"However, all further steps had to be suspended in view of the COVID-19 pandemic outbreak", he said, adding that while no cases of the virus have been recorded among UNISFA personnel, medical teams are visiting all team sites and sectors to verify the Mission's state of preparedness.

Coronavirus cases, and deaths in Sudan

Established by the Council through resolution 1990 (2011), UNISFA is mandated under Chapter VII of the Charter of the United Nations to Protect civilians under imminent threat of physical violence; and protect the Area from incursions by unauthorized elements and ensure security.

It is also tasked with, among other things, monitoring and verifying the redeployment of armed forces from the Abyei area, in accordance with the 20 June 2011 Agreement between Sudan and the Sudan People's Liberation Movement, which led to independence in the south, for the world's youngest nation.

UNISFA's mandate was last renewed by the Council on 14 November 2019, which through resolution 2497 (2019) called for Sudan and South Sudan to make "measurable progress" on border issues.

At the same time, the Council kept the Mission's manpower at 2,550 troops and 640 police officers. In doing so, it expressed concern about delays in reaching full police deployment, noting that Khartoum had not promptly issued visas.

Mr. Lacroix said the months ahead will no doubt pose new and unprecedented challenges due to the COVID-19 pandemic, but UNISFA will keep engaging with Khartoum and Juba to facilitate implementation of both previous agreements and the Mission's mandate.

"UNISFA will also continue to play a stabilizing role in the Abyei area and along the border region", he added.

The meeting also heard from the UN Special Envoy for the Horn of Africa, Parfair Onanga-Anyanga, who warned that the coronavirus pandemic would have a negative impact on peace processes in both Sudan and South Sudan. His full address to the Council can be viewed below: