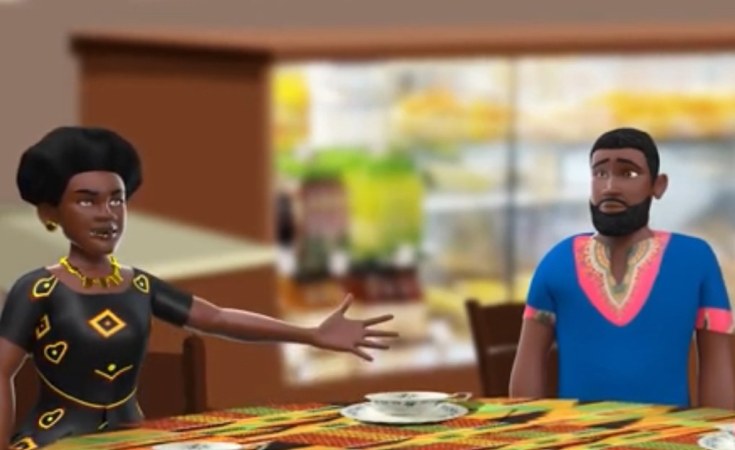 The Ubuntu Series
While educative, the series equally clamours for Africans to refocus their energies on the development of the continent instead of risking their lives for perceived greener pastures in Europe or America, says Veye Tatah, the founder of Africa Positive which produces the series.
allAfrica.com
interview By Nancy A. Onyango

Nairobi — Launched in 2019, the Ubuntu Series is an African animated series that gives an insider perspective of Africa's engagement with the rest of the world. The series is produced in Ghana by Africa Positive, a pan African organisation which seeks to promote the positive coverage of Africa.

We caught up with Veye Tatah, the founder of Africa Positive, for an exclusive interview about the series.

What is the Ubuntu Series about?

The main aim of the Ubuntu Series is to sensitize people of African descent about attitudes and behaviors that disrupt the development of our countries. The animation series tackles the origin of most of the challenges we face in many Africa countries today and at the same time offers solutions. While educative, the series equally clamours for Africans to refocus their energies on the development of the continent instead of risking their lives for perceived greener pastures in Europe or America.

We chose the name Ubuntu because it means humanity towards others. The African renaissance lies in the accomplishment of the African Identity, by realizing the black consciousness and back-to-our-roots agenda, and by reloading our sense of humanity, fairness, justice, empathy towards each other. If we as Africans do not treat our own brothers and sisters with respect and dignity, why do we expect Asians, Indians or Arabs to treat Africans with dignity?

How did you settle on the characters? What do they represent?

As Frantz Fanon puts it in Black Skin, White Masks, "...in no way should my color be regarded as a flaw." We wanted African characters that  look like us, bear African names like Chinedu (Nigeria), Imani (Swahili), Beri (Cameroon), Kojo (Ghana) and sound like us. The women characters have natural afro kinky hair and it was very important that all characters have dark skin complexion. The aim is to promote black beauty. As you know many Africans still have an inferiority complex about their black skin  complexion. The Ubuntu series wants to change this perception and improve our appreciation of our African identity.

How is the series helping us to understand Africa and the world?

Sadly, we still focus more on the issues concerning Europe and the rest of the world. If you do not know your history, you cannot navigate your future. The Ubuntu Series explains the origins of some of the problems we face in many African countries as well as in the black communities.

For Africa to develop to its full capacity, decolonization of our  mindset is at the core,  it is imperative that we  understand  our history in order to understand the future.
The west took 300  years to industrialisé, Japan under 100  and the Asian  tigers took  40 odd years. We have lagged behind due to the effects of colonialism, neocolonialism and corruption. The first episode titled 'We turn the page' sets the tone on how we can leapfrog and forge new paths of soaring economies. It summarizes where our countries are today, why they are there now and how we can change the status quo.

We need to have a pan African agenda that lays out strategies for each country to implement in the areas of nation building and industrialization. It is important that we stop the dependence on foreign aid and donations that hampers our developmental progress and distorts our markets.

What about episode 2? What are the highlights?

The second episode "Would you get into a car with a blind driver?" highlights the facts that in many of our societies people are ready to vote incompetent leaders for one reason or the other. As a result, the entire populace  suffers the consequences because of poor service delivery which are obstacles to our development. The episode also highlights bad governance, ethnicity, tribalism and incompetence in many of our institutions.

Episode 3 is somewhat melancholic. The  characters of the series seem dissatisfied and destroyed with the lack of  Africa's self-sufficiency. Is this meant to portray the frustration and dissatisfaction of Africa's young people?

I will avoid giving more spoilers for the episodes. This Episode takes us back to  our African heroes like Kwame Nkrumah, Thomas Sankara, Lumumba and others who fought very hard for a free and self reliable  Africa and advocated for home grown solutions to achieve development. It also highlights the fact that the hatred and distrust installed in African communities during colonization still prevails today in our societies.

The Corona pandemic has exposed many things: the sad reality of our health sector across the continent, our balance of payment deficit- relying on foreign imports. No country in the world has been able to end poverty without  thoroughgoing industrialisation. Your take?  Is our potential naggingly difficult to turn to reality?

The Corona pandemic highlights the issues that have been raised over the past decades about Africa's dependency on foreign aid. Do you know that agricultural growth preceded the industrial revolution in England and Japan? Which country in Africa has established a solid agricultural base today?
As you know, our political leaders are a reflection of our societies and the values. We can easily turn the wheel around if we as a people set the right priorities for our countries.

We need to promote the notion of investing for the common good and building nations that are fair for everyone regardless of their ethnicity, tribe, religious or political affiliations. With all the natural resources, we have there is no excuse why the African continent should lag behind.

For the past 60 years Africans have been receiving development Aid which comes with various strings in order to keep us dependent on the developed nations. The real industrialisation will only take place if African countries can protect their fragile economies from imported goods and services and invest in its people skills development  and infrastructures. Most western countries only opened up their markets after they had industrialized. Why should it be different in Africa?

Some consider the outpouring of texts about Africa already voluminous (blogs, websites, magazines). How are you avoiding talk-shop cliches?

A major conundrum with us Africans is that we talk too much and do too little.  We spend too much time criticizing but very reluctant to get together and work together for the common good of our countries and communities. Our actions should speak louder than words. The Africa Positive organization promotes positive change by tackling the issues at hand with concrete solutions, not theories. For example we started publishing the Africa Positive Magazine 22 years ago to promote a balance reporting about Africa and its people.

In the Ubuntu series set you have boldly represented African fashion, an important constituent in Africa's creative economy. The big question regarding the creative industry is always how African artists and creatives can make the resources and creativity  marketable and translate it to jobs and prosperity. Your take?

That was a deliberate move to  promote our African fashion industry to the world. The issue of wealth creation has a lot to do with the mindset of the people.  We as Africans have to be the first people to promote and buy African products. But because of the inferiority complex many blacks do not value and appreciate their own products. We prefer to spend so much money on foreign European and American brands thereby creating wealth and jobs in those countries.

When we buy foreign goods we do not bargain but when it comes to African products we  want to have them for free of pay so little. These are some of the issues dealt with in the series. We have to change our mindset in order to value, respect and promote each other's initiatives and business.

Positive times lie ahead. How can the young people regain trust? How do we meet the demands of a youthful population and ensure that their demographic pays dividends rather than results in dissatisfaction.

As Africans we have to build our  local enterprises, invest in our health care and education sector. By creating better and meaningful job opportunities, we will be creating a better future for our youth and reduce the influx of many youth  making the perilous journey  to Europe in search for a better life abroad.
Our countries need men and women of integrity - who are ready and willing to "work together" for the common good. Men and women of integrity – who resist the habit of stealing and exploiting their own communities, be it in the name of politics, religion or ethnic belonging. Men and women of integrity – who stand up against injustice in their communities. These are the good habits that will catalyze growth and prosperity in our communities and our countries.

What more can your audiences look forward to?