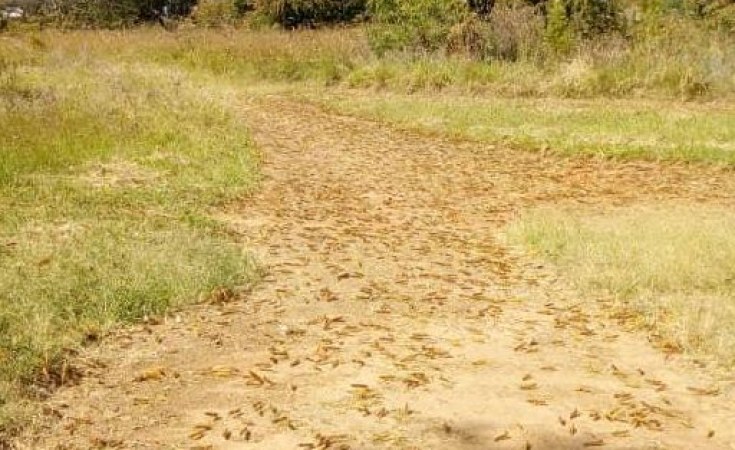 While the overwhelming uncertainties and apprehensions caused by COVID-19 permeate the whole African continent, countries in eastern African are preparing for yet another disaster - the second wave of desert locusts.  This is on top of other endemics such as yellow fever and cholera that these countries are currently facing and are engaged in combating.

The desert locust is one of several insects, birds, worms, and other pathogenies that crop and livestock farming communities are recurrently fighting to survive their livelihood. Though the magnitude varies every year, crop farmers in this area suffer 30 to 40 percent loss of annual production due to these infestations. The social and health consequences of the desert locust could be as disastrous as Covid-19  – if not more so – for the nearly 300 million people who live in Ethiopia, Kenya, Uganda, Eritrea, Sudan, South Sudan, Somalia and Djibouti .

The desert locust is potentially the most destructive pest because swarms can fly rapidly across lengthy distances. Its voracity for food - and for any green-colored plant, for that matter - is very scary. A very small part of an average swarm - occupying about one-tenth of a square mile - eats as much in one day as some 12,000 people.

Furthermore, the species of locusts approaching the region - the schistocerca gregaria - are particularly dangerous as they can grow in size and strength when in larger swarms. They indiscriminately attack grains, grasses, and all other greens and for that matter, their impact goes beyond humans and includes animals and nature.

Plagues have been recorded from as early as 2000 years ago even within the Bible and the Quran. There is and has been well-known evidence of the detriments of locust outbreaks and other pandemic-level plagues such as armyworm and quelea bird, yet there have been little-to-no practical preventative measures taken. Worrisomely, an infestation of this magnitude with the potential to destroy entire food chains in a part of the world where food scarcity and efficient production deserves public attention.  And yet according to FAO classification, even without considering the impact of locusts, the eight eastern countries are classified among those most in need of external assistance for food.

The Desert Locust Control Organization ( DLCO) , formed in 1962, (by the convention signed in Addis Ababa), for a regional pest and vector control, by countries in the region and headquartered in Djibouti is currently equipped with a few aircraft and field equipment that is supposed to take care of outbreak level operations when infestation levels go beyond certain thresholds. Of course, the large part of the operations of surveillance, early warning, and even protection is always to be carried out by the national plant protection system of the Ministries of Agriculture in the respective countries.

Sadly, such an iconic and indispensable regional body has continuously suffered shortfalls in funding and equipment as member countries' commitments remain incredibly low. The support from other multilateral agencies such as FAO is also not very different. One shared attitude by governments and mandated institutions is a retrospective that intends reactions, only post- mortem or after the event.

Pests and diseases don't have borders. The geopolitical demarcation, in this case, is absolutely irrelevant. Hence, the regional approach is the right approach from every aspect. Building an regional early warning system, expertise pools and state of the art technologies are not only more economically feasible but also biologically sound as it is a domain of the same agro -ecosystem. Besides, some of the countries in the region are too small to build such kinds of capacities and could easily be left vulnerable.

The other wrong mind-set of politicians and agencies has to do with treating recurrent challenges as emergencies. How dare a problem that appears literally every year (rarely skips to the next year) be accounted for as an emergency?

Unfortunately, it is easier to solicit resources for an 'emergency' as donors only react when people are dying. Owing to climate change and population bursts in the region, drought, flood, disease, and pests are 'new normal'. The minimum we should do to survive is to stretch the capacities of the current tools we have in place to work towards new streamlined standards.

Given that the DLCO is located in Djibouti where Intergovernmental Authority on Development (IGAD) is also located and that the two organizations serve the same consistencies, the two should build stronger ties to further their shared mission of ensuring the wellbeing of the people in the region. The national plant-protection capacities of nations, which remain at the forefront of this challenge, should be examined together to ensure the necessary capacity proportional to the ever-evolving nature of the challenge and the complexity of food security in the region.   The mini-satellite capacity countries brag on having should go beyond merely showing off and work to revolutionize the plant protection capacities of countries using geospatial data and algorithms.

Thanks to modern science, engineered dry and wet labs have become now recurrent practices in labs run by developed countries. Agriculture labs in East African countries should consider these types of labs at minimum capacity as compulsory. Sooner or later, this very fragile region must adapt to new breading materials and agronomic measures.

This will require along inducing new varieties, new agriculture seasons as season shift is apparent for cropping, weeding, and harvesting, and new resistance pests and diseases which will be extremely difficult, if not impossible, without the afore-mentioned engineered capacities. The estimated cost of building this state of the art capacity and restock DLCO fleets (as it is been estimated some years back), is in the range of  US $ 100 million which is about the US $ 0.3 per capita, affordable by all means compared to the pledge amount every time when famine declared.

Agriculture is the real bloodline for hundreds of millions of people in east Africa. Hence, as the saying goes,  anything can be late but agriculture . More importantly, given the fact that the region has become increasingly fragile due to the climate change and lack of peace and political stability, there ought to be highly responsive and rigorous development institutions along proper crises management capacities to sustain the livelihood of pastoralists and crop farmers who are the mainstay of the economy.

It is naïve – if not dumb – to expect anything will work better in recovering the natural resource bases and eradicating food insecurity related poverty. Unfortunately, the region is lagging in this mission. We need a new mindset, new narrative, new capacity, and new actions proportional to the magnitude and urgency of the challenge.

A New Model Shows Where Desert Locusts Will Breed Next

UN Releases U.S.$1.5 Million to Fight Locust Upsurge in Kenya
Tagged:
Copyright © 2020 Sustainable Development Goals Center for Africa. All rights reserved. Distributed by AllAfrica Global Media (allAfrica.com). To contact the copyright holder directly for corrections — or for permission to republish or make other authorized use of this material, click here.