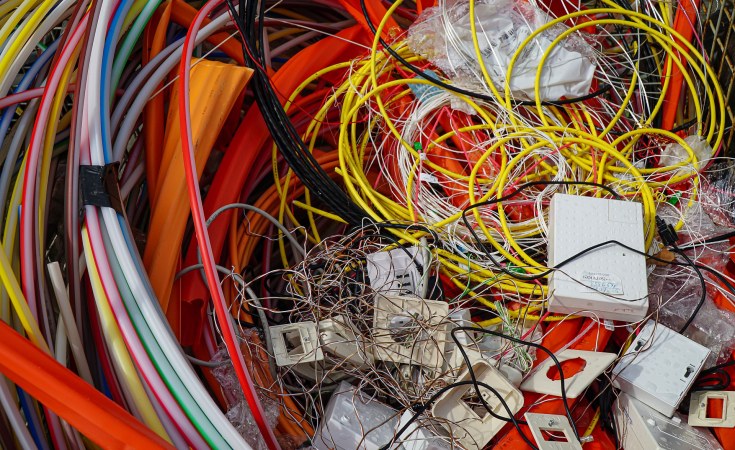 In most of Nigeria's cities, there are visible piles of refuse that have built up on roads, river banks and swampy land. These waste dumps smell bad and are breeding grounds for germs that cause diseases.

Perhaps less well-known is the electronic waste that's becoming a serious problem in parts of the country. This is obsolete electrical and electronic equipment that has been discarded. Because Nigeria does not have a formal recycling sector for safe management of e-waste, every month about 500,000 tons of electronic and electrical equipment is dumped in workshops, open spaces, water sources and landfills. More than half of this is near end of life or completely damaged .

When rain falls on informal waste dumps, polluted liquids leach out. These liquids contain toxic chemicals and metals, bacteria and viruses. They find their way into the ground and surface water, and can be taken up by plants and end up in animals and people.

Electronic waste is one of the fastest-growing types of waste in some parts of the world. Globally, the eco-friendly recycling of e-waste is optimally low. So more than half of almost 50 million metric tonnes of e-waste generated worldwide ends up in landfills or is illegally transported.

Some of Nigeria's e-waste is equipment that was imported when new and is discarded after its useful life. Some is imported second-hand. Out of an average of 500,000 tonnes of used electrical and electronics equipment imported into Nigeria, more than 25% is dead on arrival.

I have carried out several studies over the years into the environmental and health impacts of this electronic waste. My findings show that metals from waste have contaminated land and water and that these substances are harmful to living organisms.

My studies standard and advanced techniques to explore the genotoxic and mutagenic effects and potential environmental and health impacts of this electronic waste. Specifically, I have shown how e-waste from Alaba international market and Computer Village in Lagos State induced genetic damage in the cells of microorganisms, plants, animals and people.

Even though these e-waste dump sites are a health hazard, many people make their living on them. According to the International Labour Organisation, up to 100,000 people work in the informal e-waste recycling sector in Nigeria. They collect and dismantle electronics by hand to reclaim components that can then be sold.

These people are at risk of infection and physical injury from handling waste. They are in danger of direct chemical poisoning leading to organ dysfunction, or disorders that are an indirect result of exposure to hazardous chemicals. E-waste can also induce genetic damage that could affect future generations.

In one study, we collected blood samples and cheek cell samples from teenagers who were sorting through waste at the Alaba international electronic market. We found their blood contained much higher levels of heavy metals than a control group.

Within this group, higher levels also corresponded with longer periods spent in contact with e-waste, genetic predisposition (that is an individual's genetic susceptibility), previous or concurrent exposures to other substances (such as cigarette smoke and alcohol), and the concentrations and types of toxic substances the person had been exposed to.

Genetic damage is usually due to exposure to chronic concentration or doses of xenobiotics. The most worrisome aspect is when the effect is not expressed in an individual but transferred onto another generation before it is expressed.

There is an urgent need for greater awareness of the dangerous substances found in the environment. The attitude of Nigerians towards waste disposal should change: waste should be managed sustainably by reducing, reusing, recovering and recycling materials safely.

The government should build properly engineered landfills to contain waste. Residential areas should be separated from electronic markets. Contaminated soil and water should be treated to protect workers and residents.

Nigeria also needs legislation that deals specifically with electronic waste. The country could be guided by examples provided by the European Unionand China's National Development and Reform Commission.

Previous Story
Our Old Cellphones, Computers and Appliances Are a Bigger Problem Than Ever. Here's What We Need to Do.
Next Story
Electronic Waste Management - Multibillion Recycling Center Opens in Yaounde

Our Old Cellphones, Computers and Appliances Are a Bigger Problem Than Ever. Here's What We Need to Do.