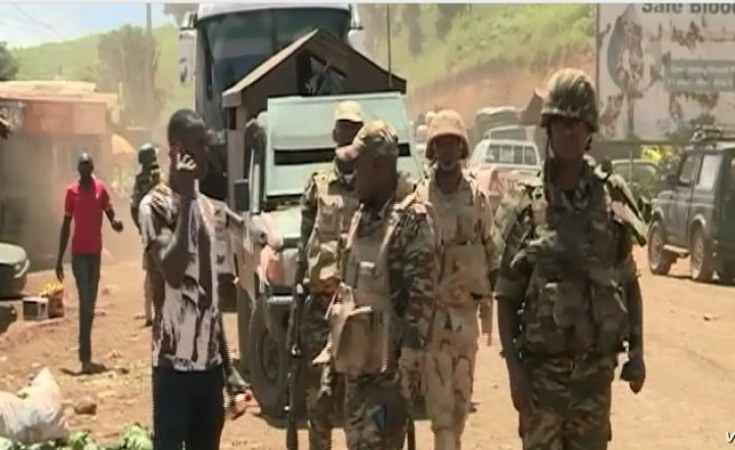 Yaounde — Cameroon's military says it killed at least 22 separatist fighters in a week of raids on seven rebel camps in the country’s troubled western regions.  Villagers, however, say the military killed at least 13 civilians in the raids, which involved hundreds of troops.

The commander in Cameroon’s English-speaking Northwest region said more than 300 troops were involved in successful raids this past week on rebel Ambazonian camps.

General Valere Nka spoke via a messaging application Monday from the town of Bafut, where he was praising troops on behalf of Cameroon’s President Paul Biya.

"A good number of Ambazonians were neutralized and we have [recovered] 50 guns, pistols, ammunitions, motorcycles and even a Fortuna car, two horses and so on," he said.

Nka said troops on Thursday and Friday killed 15 rebels in Bafut, including an infamous fighter calling himself “General Aladji,” who in 2018 kidnapped dozens of schoolchildren.

He said Cameroonian troops killed seven other rebels during raids on camps in several villages and the town of Bamenda with no civilian casualties.

But villagers disputed that claim and said at least 13 civilians were killed in the clashes.

Speaking through a messaging app from the village, he said three of those killed were fellow Muslims with whom he was praying on Friday when the military opened fire.

Tanda said his village had welcomed the military in hopes that they would prevent rebel attacks and abductions.

He told VOA that villagers had expected the army to protect them from the rebels.

"It is rather unfortunate. They had been hoping that the military will come in and solve their problems so that this killing left and right will come to an end. They regret that they are now like orphans.  They are tired. They want peace and that the rule of law should reign," he said.

The separatists on social media blamed Cameroon’s military for the civilian casualties, acknowledged their own losses in the raids, and claimed responsibility for an unclear number of military deaths.

Cameroon’s military denied suffering any losses and said only a few of its troops were wounded.

Cameroon’s anglophone rebels have since 2017 been fighting to carve out an English-speaking state from Cameroon’s French-speaking majority.

The rebels and Cameroon’s military routinely accuse each other of atrocities against civilians, which rights groups have documented on both sides.

The United Nations says the fighting in the English-speaking  regions has cost more than 3,000 lives and displaced more than half a million people.