It's no longer news that Nigerian legislators spend little of their time enacting laws which actually improve people's lives. They engage in rigorous debates and heated arguments over matters concerning their personal interests such as electing Principal Officers and Committee Chairmen, or allocating brand new vehicles, while matters of public interest are habitually glossed over. This appears to be the case with the newly introduced Control of Infectious Diseases Bill 2020.

A plagiarised version of Singapore's Infectious Diseases Control Act, it suspiciously passed both its first and second "reading" in one sitting despite the fact that the majority of legislators had neither received a copy of it nor had any idea of its contents! The Speaker of the House who sponsored the Bill expressed "regret" that against all traditions, the Bill was neither publicised nor shared to members in advance. As if to imply that two wrongs make a right, he argued that this isn't the first time a Bill would pass two readings in one sitting, with neither public hearings, nor the majority of members receiving copies before voting! The 47-page document purportedly aims to prevent the introduction and spread of infectious diseases in Nigeria.

Disregarding basic human rights, it seeks to empower the police, health officers, and anyone else directed by the National Centre for Diseases Control (NCDC) Director-General (DG) to arrest any suspect for breach of any of its 80 provisions with neither the need for a warrant of arrest, nor any reasonable evidence that a crime has been committed! Also, by prohibiting persons from leaving isolation centres without permission from the NCDC DG and requiring them to submit to any medical treatment that he deems fit, the Bill effectively permits physical torture and detention without trial! In addition, the Bill seeks to empower the Minister of Health to declare any premises an "isolation centre" with no provision that such premises must be owned by government, or that compensation should be paid to the owner.

Rather than specify a means by which citizens should be enlightened and encouraged to be vaccinated, the Bill proposes stringent penalties for failure to observe its provisions and gives almost unlimited powers to the NCDC-DG to do whatever he "deems fit"! He would be empowered to appoint any public official as a "health officer" authorised to make arrests without warrant, and also be empowered to close any premises which he believes "might lead" to the outbreak or spread of an infectious desease. In the existing Quarantine Act which the Bill seeks to replace, authority resides with either the President or Minister.

The proposed legislation would allow the NCDC-DG to exercise full unconstrained authority without the need to explain anything to anyone. In betrayal of federalist principles, the Bill seeks to take the power to issue quarantine orders away from state governors who are virtually ignored in the whole document! For reasons best known to themselves, the House leadership promoted this defective legislation and seem intent upon bulldozing it through, despite objections from the NCDC itself. Their current DG, Dr Chikwe Ihekweazu, said there is no need for drafting new legislation in the middle of a crisis, and that the matter should be deferred for due consideration after the Covid-19 pandemic is over. Indeed, any claim that the bill is in response to coronavirus is false.

As it stands, there is no universally accepted vaccine against covid-19. Therefore, it's illogical to claim that a law is being passed to make compulsory something which doesn't exist! There are too many conspiracy theories and co-incidences surrounding this proposed legislation to be ignored. Firstly, there is a fear of policies to implant micro-chips into all humans. If proof of vaccination is to be a document, mass production of fake vaccination documents which will be more original than the originals themselves will occur! The fear of micro-chipping as a means of vaccination verification is real because its promoter, Bill Gates, who has been widely criticised is a major collaborator with NCDC. Gates is neither a doctor, micro-biologist nor an expert in any medical field. He is into computer technology and is solely interested in his plan to micro-chip the world.

The House leadership's support of the Bill against all opposition was evidenced by the fact that it was declared "passed" despite most of the members present reportedly voting against it. In light of this perhaps it's no co-incidence that according to the World Health Organisation, the federal government has indicated interest in being part of trials of a covid-19 vaccine to "evaluate the safety, and efficacy of the full drug and drug combinations". In light of the Pfizer episode of 1996 which led to the death of so many children in the North, Nigerians have every right to be sceptical about being used as guinea-pigs for experimental drugs. Clinical trials of virus vaccines involve giving some people the real vaccine, others a combination of vaccine and other drugs, and the remaining people a placebo (dummy drug with no effect). After this the virus is introduced into all groups and their different reactions observed.

At the end of the day, statistics will prove whether the vaccine is effective or ineffective by itself or in a combination with other drugs, and is with or without side- effects or even deadly. This process is what the Bill seeks to compel Nigerians to participate in. The code name for this covid-19 vaccine development programme is "Operation Warped Speed". It's an acceptance that processes which are normally carried out over a five-year span, are being compressed into under six-months! Forced vaccinations have no place in a free society.

This proposed legislation would limit freedom of association on a whim, empower arrest without warrant, enforce vaccinations without complaint and even make it a crime not to be vaccinated! The opposition People's Democratic Party (PDP) has vehemently objected to both the contents of the Bill and the processes being used to force it through. They correctly allege that it's worsening public mistrust of the legislature and is capable of breeding public resistance. They also claim quite correctly that if and when an effective vaccine is found, there will be no need to convince Nigerians to use it. There is no doubt that in the light of recent developments, the Quarantine Act needs updating, nevertheless inappropriate legislation and ill-advised speed is not the best way to proceed.

Inside Details of Nigeria's Controversial #NCDCBill 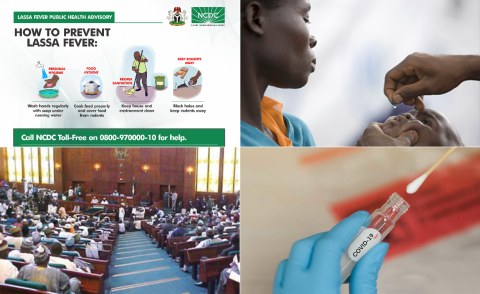 Nigeria's Infectious Disease Bill Clouded by Bribery Claims
Tagged:
Copyright © 2020 Daily Trust. All rights reserved. Distributed by AllAfrica Global Media (allAfrica.com). To contact the copyright holder directly for corrections — or for permission to republish or make other authorized use of this material, click here.