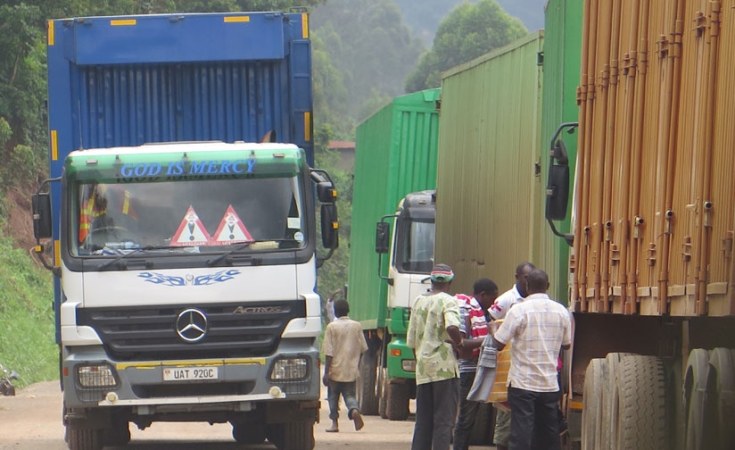 Tanzanian truck drivers earlier on Monday May 4, attacked their Rwandan counterparts in protest of the relay trucking system, which was introduced by Rwanda as part of the efforts to curb the coronavirus pandemic.

The relay system meant that Tanzanian drivers would swap with local drivers at the border, a move that has been contested by some Tanzanian cargo transporters.

As a result, Tanzanian drivers reportedly staged a protest on Monday morning at a place called Benako - about 20 kilometres away from the Rwandan border of Rusumo.

In a series of videos circulating on social media, Tanzanian drivers are seen blocking trucks from either side of Rwanda and Tanzania, shouting at Rwandan drivers and pelting their cargo trucks with stones.

Robert Bafakulera, the Chairperson of the Private Sector Federation (PSF) told The New Times that the standoff is a result of the recent rules Rwanda put in place to manage truck drivers.

"I think it's because Tanzanians didn't want to comply (with the new rules) or it was very early for people to understand the system, so they found it difficult to swap their trucks to Rwandan drivers," he said.

The latest guidelines contested by Tanzania, among others, direct truck drivers to swap trucks upon reaching the Rusumo border in Kirehe district where the government has set up a temporary customs clearing site.

This is because recent coronavirus cases registered in Rwanda were linked to truck drivers and their assistants, who interact with a lot of communities.

To manage the drivers, the government made it mandatory for all truck drivers from Tanzania to be tested at borders, and those transporting cargo to deliver it to Inland Cargo Depots at Kiyanzi site in Kirehe.

Fred Seka, the President of the Federation of East Africa Freight Forwarders (FEAFFA), condemned the attacks, saying it is not based on the agreement that truck drivers in the region adopted on March 1.

"We spoke to associations of truck drivers and owners from the region and we showed them how this (the system of swapping drivers) is the only and most effective way to contain coronavirus. The attacks are against what we agreed on," he said.

By press time, the federation had not made any formal communication with truck drivers and owners in the region about the latest incident, but Seka told this paper that he was trying to reach out to them.

"I am trying to speak to the associations and truck owners from Tanzania to cool down their drivers, because this is likely to cause damage, delays or even spread COVID-19 and complicate the social relationship of drivers from both sides," he noted.

Last week on Friday, road transporters and freight forwarders associations from Tanzania and Kenya held a meeting with FEAFFA, which recommended East African Community partner states to have a harmonized approach on management of drivers during the COVID-19 period.

The associations asked member states to consider testing truck drivers at the start of their journeys or at designated facilities along the corridors to facilitate easy passage through borders.

Edward John Urio, the President of Tanzania Freight Forwarders Association noted that the meeting between transporters had sought to engage countries, which he insisted that they have been "silent" about the whole issue.

"Apparently on this issue, our governments have been so silent. We have sent proposals to them but nothing," he added.

Among the challenges of the relay driving system put forward by the transport and freight industry include the fact that it is hard to acquire competent truck drivers across borders due to lack of a harmonized Heavy Goods Vehicle (HGV) professional driver training.

This, they said, poses road safety and asset integrity challenges.

They also indicated that the move was likely to eliminate the majority of the transporters (the small and medium sized transporters) that are unlikely to mobilise the requisite capacity to operate across borders.

This is in addition to difficulty in handling insurance claims related to the cargo and the trucks in case of any eventuality, uncertainty on the safety of the cargo, the trucks as well as fuel due to the involvement of multiple drivers.

However, Bafakulera argued that the decision was the only effective way that any government committed to address the pandemic in such a critical period would take.

He told this paper that he had spoken to Elias Lukumay, the vice chairman of Tanzania Truck Owners Association (TATOA) and a few truck owners, some of whom understand the magnitude and the importance of such a move.

Bafakulera added that they have proposed a different approach, which is asking cargo owners and transporters to enter new contractual obligations that directs drivers to only deliver goods at the Rusumo border and return home.