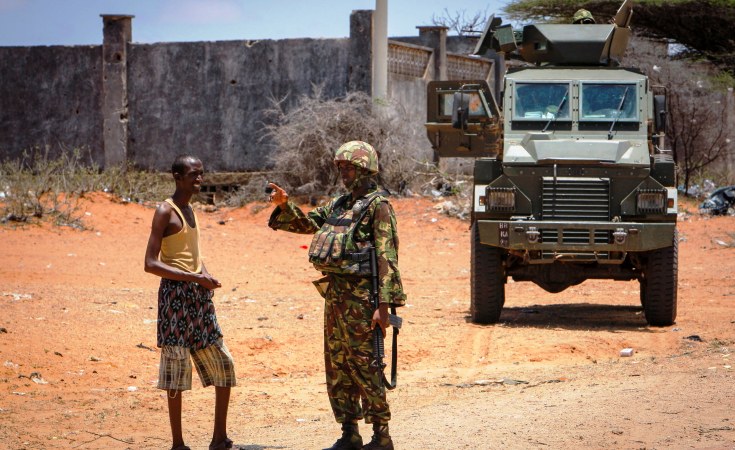 Stuart Price/UN
A Kenyan soldier serving with the African Union Mission in Somalia gestures during a conversation with a Somali man on at a roadside in the port city of Kismayo.
Reporters sans Frontières (Paris)
press release

Reporters Without Borders (RSF) calls for a full and thorough investigation into the way a Somali journalist was stabbed to death on a Mogadishu street yesterday evening, because the initial evidence suggests that he was the victim of a premeditated murder.

Said Yusuf Ali, a reporter for privately-owned Kalsan TV, was stabbed four times when he stepped in between a man and a woman who appeared to be fighting. According to the National Union of Somali Journalists (NUSOJ), passers-by detained the man and handed him over to the police, who are now questioning him on suspicion of deliberately killing Ali. The woman fled the scene but the police are actively looking her because they believe she deliberately allowed herself to be used to attract Ali's attention.

RSF has learned from people close to Ali and from local sources that he recently covered an Islamic school teacher's murder by suspected members of the Islamist rebel group Al-Shabaab. He had also covered Al-Shabaab's recent military defeats.

"The initial information suggests that this journalist was deliberately targeted and lured to his death," said Arnaud Froger, the head of RSF's Africa desk. "The Somali authorities must do everything possible to catch all those suspected of being behind his murder and to establish their precise motive." Froger added: "Somali journalists have been dying amid indifference and with complete impunity for too long. Only serious investigations and firm measures to reinforce their protection will obtain results capable of producing a lasting improvement in press freedom in Somalia."

RSF has for months been calling for the creation of a national mechanism for protecting and securing journalists, in which the first step would be a network of focal points within government ministries and agencies concerned with press freedom.

Ali is the second Somali journalist to be murdered this year. Abdulwali "Online" Ali Hassan, a reporter for Mogadishu-based Kulmiye Radio and for Universal TV, a Somali TV channel based in London, was gunned down in February, shortly after covering Somali army operations against Al-Shabaab.

Kenya Mulls Army's 2021 Withdrawal From Somalia
Tagged:
Copyright © 2020 Reporters sans Frontières. All rights reserved. Distributed by AllAfrica Global Media (allAfrica.com). To contact the copyright holder directly for corrections — or for permission to republish or make other authorized use of this material, click here.