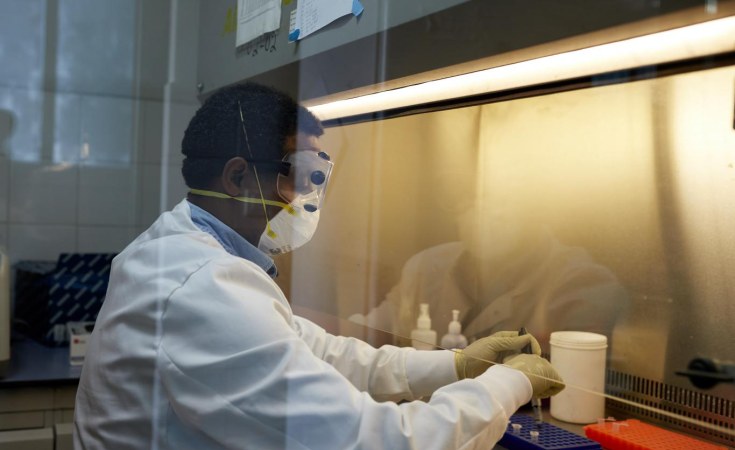 WHO Africa
The work of scientists across Africa to conduct clinical trial reviews and combat Covid-19 gets little attention.
Deutsche Welle (Bonn)
By Tsehay Chanie

Inventors in Ethiopia have been developing devices and gadgets to combat COVID-19. One of them, Ezedine Kamil, has told DW how a lack of funding prevents his designs from fully benefitting local communities.

Since the outbreak of the coronavirus pandemic, ventilators, face masks and gloves have become much-sought-after items around the globe. Sourcing medical and personal protection equipment is a huge problem for poorer countries such as Ethiopia.

The pandemic has spurred on creative minds, though, including that of Ezedine Kamil, an 18-year-old natural science student from Welkite, a rural town 160 kilometres from the Ethiopian capital, Addis Ababa.

Ezedine has 30 inventions to his credit so far. Thirteen have been patented by the organization SaveIdeas.

The onslaught of the virus presented a unique opportunity to Ezedine. He first designed an contactless electrical soap dispenser with a built-in sensor, which could also be operated using a mechanical pedal during power blackouts -- common occurrences in Ethiopia.

Ezedine said his invention has been embraced by the local community. Fifty dispensers have been produced by the local university and distributed in banks and hospitals across Welkite.

Ventilators, which help patients breathe, are in even greater demand. Ethiopia has only 557 ventilators, according to the country's health ministry, 214 of which belong to private hospitals. That leaves just 163 ventilators for COVID-19 patients -- too few for Africa's second most populous nation.

"When I heard about the global shortage and the high price of ventilators [$30,000, €27,613 each], I thought about building them myself," Ezedin told DW. "Ethiopia used to import those machines, but I didn't think foreign countries would help us at this time."

Having never built a ventilator, he set off by searching open source manuals online. His invention used a plastic pouch known as an Ambu bag, a mechanical ventilator and a screen operated from a cellphone.

After successfully testing a prototype, he started producing and delivering the new machines to the local community.

Next, the young inventor set about building a device to remind people not to touch their faces, one of the central massages of the global coronavirus awareness campaign.

"The device is like a watch with a sensor," Ezedine told DW. "Every time the hand approaches the face, the device rings, reminding the wearer not to touch their face."

The device is made out of easily available, discarded electrical appliances and plastic materials which cannot decay easily. He described the gadget as "multi-purpose."

"You can equally apply the unit to monitor the 1.5 meter physical distancing required to fight off the virus by applying it on your belt," he said.

Despite his best efforts, Ezedine's inventions are slow to reach the local community. Among his many innovations, only a fire alarm and the contactless soap dispenser have so far been implemented.

"Mass production requires a big investment. It is beyond my capacity to start it alone. It requires a major capital injection," he told DW. "And the biggest problem in this country is that inventors who wants to work on their own initiative never get financial support from the government."

When Ethiopia's Ministry of Science and Innovation, in collaboration with the United Nations Development Programe (UNDP), recently launched a COVID-19 challenge, Ezedine was quick to submit his list of inventions. Last year he won a $8,000 prize for designing an electric and solar bicycle.

As the bright student impatiently waits for his inventions to garner financial support from either government or private investors, he has his eyes firmly set on turning his passion of innovation into a career path.

His goal is to create jobs for the unemployed.

"My great wish is to apply those inventions for the purpose which they were created for in the first place," he told DW. "To solve problems in the communities out there."

Previous Story
Next Story
COVID-19 and Innovation - the New Normal

COVID-19 and Innovation - the New Normal