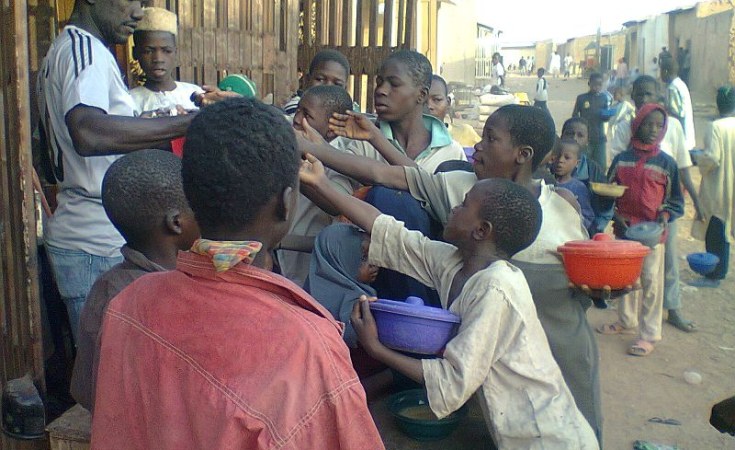 In their response to the pandemic, state governments have singled out Qur'anic schools not for epidemiological but political reasons.

On 21 April, the governors of Nigeria's northern states logged on to discuss the growing spread of the coronavirus. By the end of the call, they unanimously agreed that classical Qur'anic education in their regions should be halted and students sent home. The next week, the governor of Kano, the current epicentre of the outbreak in northern Nigeria, said over 2,000 students had been returned to their states of origin and that more would soon follow.

Qur'anic education, also known in Hausa as almajirci, is popular across the West African Sahel. Under this system, boys and young men (almajirai) live and study with their teachers (malamai). Many of the schools lack hygiene facilities and students often live in crowded conditions. Almajirai can often be seen begging for food or alms on the streets of northern Nigerian cities.

Many have long deplored this education system as a form of child abuse and seen begging students as a nuisance. Several northern rulers, such as Kano State Governor Abdullahi Umar Ganduje, have tried to ban begging and described opponents of such prohibitions as "anti-development and anti-people".

Since several students tested positive for COVID-19, critics of almajirci have also accused the schools of furthering the spread of coronavirus. Some had taken to social media to call for Qur'anic students who have not returned home to be "flushed out" or forcibly quarantined. State governments have heeded these calls.

By contrast, supporters of the education system have condemned measures against their schools. They see such policies as an attack on a centuries-old religious institution and as proof of continued biases against Qur'anic study dating back to colonial times. They demand instead that support be provided for their students and teachers.

Many almajirci insiders question the true motive behind state governments' recent decision to close Qur'anic schools and "repatriate" students. They suspect the government of taking advantage of the current crisis to push through controversial policies. Some malamai in Kano have resisted the closing order and are now operating in hiding, often with the tacit consent of the communities around them.

Many in these communities feel let down and abandoned by their governments since they imposed lockdowns. Poor people across the region have struggled to feed themselves. And, in the absence of support, many have turned to prayers and supplications (or addu'a) as their best, if not only source, of protection. Qur'anic schools are reputed for their addu'a and are commonly perceived to play an important role in fending off crises.

After decades of neglect, supporters of almajirci have little confidence that governments are acting with their best interests at heart. The prospect of children being scooped up into trucks and left at the mercy of authorities has filled teachers, parents and students with dread. Many malamai and parents have urged students to return home themselves, fearing rumours of looming arrests.

Reports of "isolation camps" for almajirai forcibly evacuated from Kano have done little to assuage concerns. Over 500 young people are currently confined in one of these camps in Jigawa State. Social distancing there is a faint ideal and footage from the site shows none of the children wearing a face mask. It remains unclear how and when the students will be reunited with their families and what measures will be taken to prevent COVID-19 transmissions from such camps to the rural areas where most almajirai originate.

It is hard to avoid the impression that state governments in northern Nigeria are prioritising the concerns of better-off urbanites raging on social media over those of rural communities and the almajirai themselves.

A weak lockdown and lack of testing

The current lockdown does not seem to have halted the spread of the virus in northern Nigeria. A sudden surge in - as yet largely undiagnosed - deaths in Kano City the past weeks gives reason to believe the disease has already spread in the community. In many parts of Kano state, the lockdown has been poorly enforced, with security personnel at roadblocks clocking off in the afternoon. Meanwhile, the government's decision to suspend the measures ahead of Ramadan led to packed markets as people rushed to stock up on food. Many residents said they had never seen Kano so crowded.

In the absence of widespread testing, however, it is impossible to know how far the coronavirus has spread. Until last Friday, when a second centre opened, Kano State had only one testing centre for its ten million plus inhabitants, and that centre has been closed for several days due to a shortage of testing kits and concerns that staff had been infected.

No one knows therefore whether Qur'anic students are more likely to be carriers of the disease than, say, health workers, who have been attacked as presumed spreaders of the disease in other countries, or security staff, most of whom man checkpoints without any protective gear.

If the almajirai have been singled out, it is not for epidemiological reasons but social and political ones. Accusations against them have a long history. They range from allegations of petty theft to recruitment into radical groups like Boko Haram. In many cases, little or no empirical evidence is available to back up such claims. But the almajirai's low social standing and lack of strong spokespersons make them easy scapegoats.

Going forward, longstanding grudges against the Qur'anic education system should not stand in the way of more compassionate responses to its students' plight. Rather than deporting and confining children, states should offer testing and safe passage to those willing to return, while providing daily necessities for those who stay. Punitive measures will only be met with resistance and evasion, ultimately exacerbating the risk of COVID-19 spreading.

The height of a global pandemic is not the right time to settle highly political questions about the future of Qur'anic education in northern Nigeria.