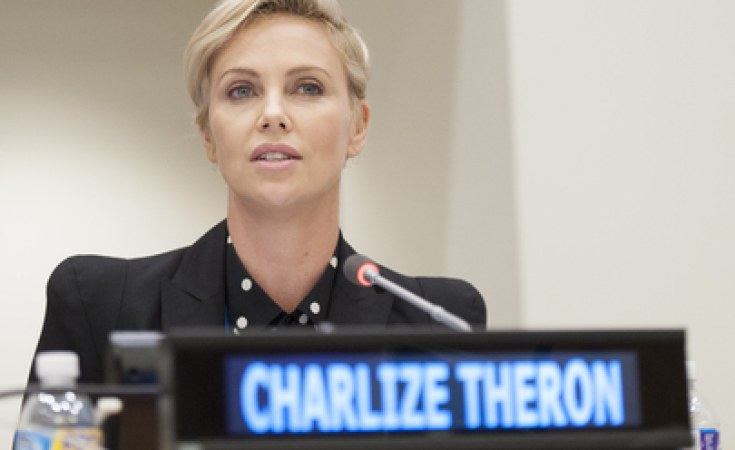 The #TogetherForHer initiative launched in April by the Charlize Theron Africa Outreach Project with CARE and the Entertainment Industry Foundation pledged $500,000 to domestic violence shelters in the United States and South Africa.

"(One in three) women will experience gender-based violence in their lifetime; in the past year, 243 million women & girls have. Humanitarian crises like #COVID19 only make this worse," Theron said on Twitter.

"I'm so proud that these exceptional, powerhouse women heard my rallying cry & are uniting as one."

More than 50 female role models from the worlds of film, sports, fashion and business have pledged money to the campaign to help women facing violence while forced indoors.

Actresses to join Theron's campaign include Michelle Williams, Salma Hayek, and Laura Linney as well as Academy Award-winner Viola Davis. Donations to the fund will support women in up to 100 countries, according to a campaign statement.

"I am a child survivor of domestic violence. It is the last of the acceptable abuses," said "Fences" actor Viola Davis in a statement.

"Providing funds to give (survivors) the means to get out and the emotional support to know they are worthy is everything."

Concern over abuse of women under quarantine has increased around the world, with calls to domestic violence hotlines in Europe rising by as much as 60% during the pandemic.

Theron has a long history campaigning against domestic abuse, serving as a United Nations Messenger of Peace with a special focus on ending violence on women since 2008.

The 44-year-old won an Academy Award for her role in the 2003 movie "Monster", in which she played serial killer Aileen Wuornos, who came from a background of violence and abuse.

Theron has also had personal experience with domestic violence: at age 15, her mother fatally shot her alcoholic father as he threatened the family in a drunken rage.

(Reporting by Oscar Lopez @oscarlopezgib; editing by Belinda Goldsmith. The Thomson Reuters Foundation is the charitable arm of Thomson Reuters, and covers the lives of people around the world who struggle to live freely or fairly. Visit http://news.trust.org)