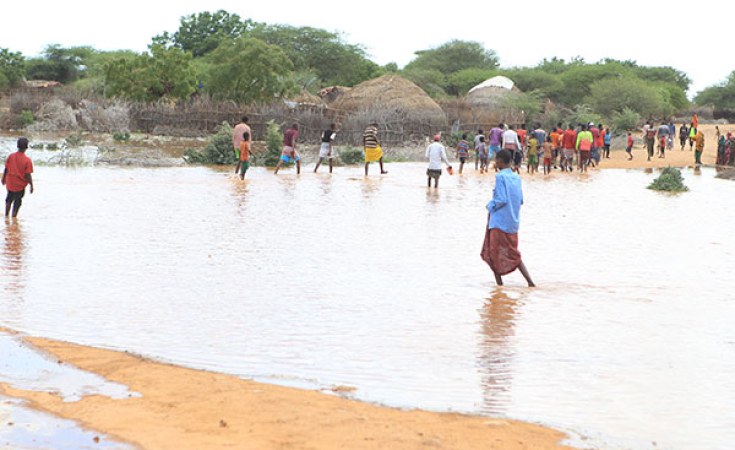 Manase Otsialo/Nation Media Group
The flooded Darika village in Mandera East on May 8, 2020. At least 56 families have been displaced by floods after River Daua, which originates in Ethiopia, burst its banks.
The Nation (Nairobi)
By Manase Otsialo

Devastating floods from the swollen River Daua along the Kenya-Ethiopia border have left several villages in Mandera County under water, hundreds displaced of locals and farms washed away.

Also at risk are residents of Bellah, Bulla Haji, Neboi, Shafshafey, Boystown and Border Point One, all located along the river.

In Darika village in Mandera East, 56 families were forced out of their homes after houses were filled with water on Friday night.

"We have nowhere to go to but to light a bonfire and stay in areas that are a little higher because there are floods everywhere," said Mr Ali Adan, a resident.

Mandera has recorded little rainfall this season but residents living along the river have been affected by floods.

"We are always in this situation every time it rains heavily in Ethiopia where this river comes from and our pleas to have the water harvested and put to good use by our county government have fallen on deaf ears," said Mr Adan.

Mr Hassan Ali, who farms along the river, is counting loses after his onions were washed downstream.

"I have lost at least Sh600,000 in this situation after my onions were washed away by floods," he said.

Mr Harun Siad, another farmer, said his water pumping system on his 30-acre farm has been washed away.

"I have lost my crops, farm machines including water pumping generators, all valued at Sh1.5 million," he said.

On Thursday, Governor Ali Roba raised concerns over threats posed by floods in the county due heavy rains in neighbouring Ethiopia.

"We have reports of massive flooding of Daua River being experienced upstream from the Ethiopian highlands, which is the source of the river, and all the way to Mandera town," the governor said.

The floods, he noted, had submerged the main sources of water serving Mandera Municipality residents.

Suftu intake, he said, was completely submerged as is Neboi whose three wells have collapsed.

The damage to water infrastructure has left the only private well - Haji Kerrow - to serve the populous Mandera Municipality. But Mr Roba said the water emergency teams are working round the clock to restore supply to the residents.

He warned locals to be cautious as the water levels continue rising.

An emergency surveillance team from the county government is on standby to evacuate residents threatened by floods from Rhamu Dimtu to Border Point One, according to the governor. But by Friday, the said team was yet to reach the affected areas.

The swollen river has so far claimed the lives of four teenagers along the Kenya-Ethiopia border.

"The situation is getting out of hand as the water levels continue rising. More people will be displaced and I call on well-wishers to come forward and offer assistance," he said.

Death, Destruction as Floods Rain Havoc Across East Africa
Tagged:
Copyright © 2020 The Nation. All rights reserved. Distributed by AllAfrica Global Media (allAfrica.com). To contact the copyright holder directly for corrections — or for permission to republish or make other authorized use of this material, click here.