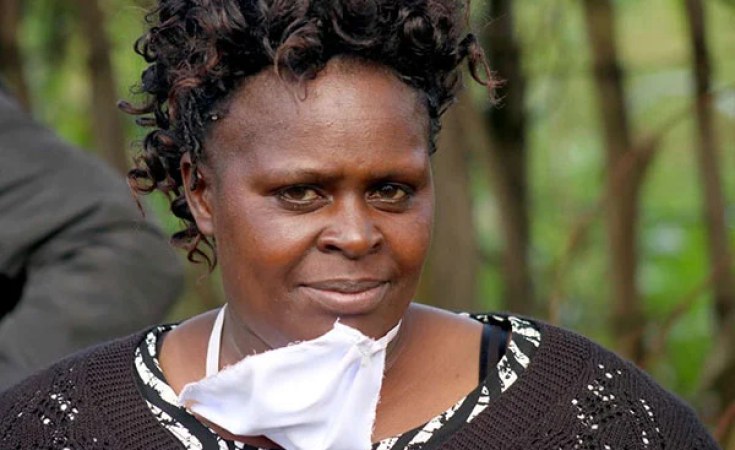 A clip showing her fighting for her life after slipping into raging waters of a river went viral on social media last week, but Rahab Nyokabi Mwangi, 40, does not want to watch it.

It captures the worst day in her life - the day she came closest to death. "I do not want to watch it. I am already traumatised, and I am too scared to even watch it. Let me just thank God," she says.

It was Thursday last week, Ms Mwangi and her friend were returning home in Moset - Kamukunji village in Kinangop, from the shopping centre in Kitiri.

"The rains had fallen heavily while we were still stuck at the market. When the rains stopped, we began trekking back home. When we arrived at the bridge, where we usually cross, it was already submerged by water, rendering it impassable. Villagers had converged at a narrow section of the river upstream and improvised a makeshift bridge using logs," she said.

Among those at the banks was her son, who had gone to help her carry the things she had gone to buy.

"My son crossed over, took the luggage and went upstream to look for alternative ways home. I preferred to use this spot because I had used it before," she said.

A neighbour, Stephen Njomo, was on the other side of the river, helping people to cross.

"When it was my turn, Njomo stretched out his hand and I stepped on the log placed across the river as I held onto a tree branch. But while I was crossing and trying to get hold of Njomo's hand, I slipped.

"I held onto a broken branch, but the waters were flowing at a very high speed and the volume was overwhelming, so I let go of the branch and started swimming. I am not a good swimmer, but I have seen people swim before and I knew this was the only way to save my life," she said.

Ms Mwangi said that as onlookers screamed, she swam from bank to bank in zig zag motion even though she made very little progress.

"I refused to panic and I made silent prayers, telling God that I still wanted to take care of my children," she said.

Mr Nzomo had dashed ahead and handed her a long rod, asking her to hold tight onto it.

Ms Mwangi says at that moment, she knew that was the only chance for her to redeem herself, and so although she had taken in a lot of water, she held on tight and Mr Nzomo pulled her out.

The casual labourer, who is also a father of two, refused to take all the credit for the rescue, saying that were it not for Ms Mwangi's courage, she would have drowned.

Mr John Kariuki, a neighbour who recorded the video, said he has been recording videos and posting them on social media in order to let the leaders know and intervene, especially on matters to do with infrastructure.

"When the unfortunate incident happened, I wanted to take a video clip of the submerged bridge and share it on Facebook," Mr Kariuki said.

Death, Destruction as Floods Rain Havoc Across East Africa
Tagged:
Copyright © 2020 The Nation. All rights reserved. Distributed by AllAfrica Global Media (allAfrica.com). To contact the copyright holder directly for corrections — or for permission to republish or make other authorized use of this material, click here.