East Africa: How East Africa Is Fighting Locusts Amid Coronavirus 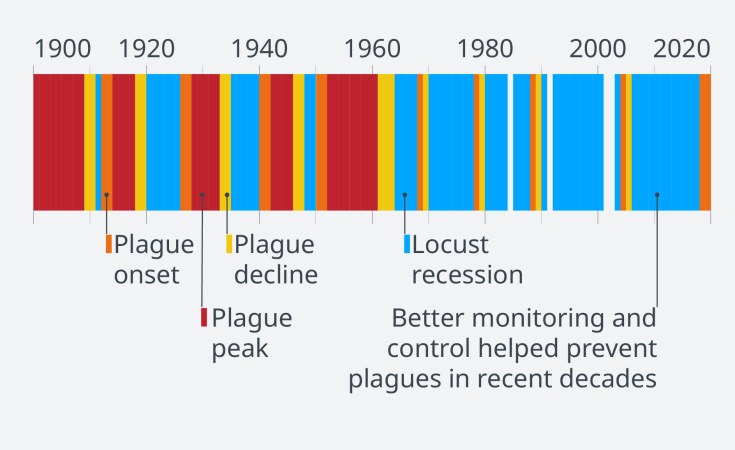 East Africa is still battling its worst locust invasion in decades. Amid the COVID-19 crisis, countries are fighting to stop a new generation of locusts swarms.

Since 2019, East Africa has been desperately trying to control a devastating desert locust invasion. The long rains that typically fall across the region from March to May this year will probably allow yet another generation of locusts to mature, further threatening crops and livelihoods.

This would be an additional blow to food security in East African countries, which are also facing economic disruption from the coronavirus pandemic response.

In the region, swarms of desert locusts covered more than 2,000 square km - an area as big at Ethiopia's Lake Tana - in April alone.

Swarms of this size are made up of billions of insects, which can obliterate vegetation, eating more in a day than the combined population of Kenya and Somalia do.

Ethiopia and Kenya are currently the worst hit by the locust infestation.

New waves of locusts are forecast for the coming months in Kenya, southern Ethiopia and Somalia as seasonal rains create favorable breeding conditions.

"The next generation of swarms will be around late June or early part of July," says Keith Cressman, senior locust forecasting officer at the UN Food and Agricultural Organization (FAO).

The timing is particularly worrying as this would coincide with the start of the harvest season.

Desert locust swarms strip almost all green vegetation from crops and trees over immense areas, leaving behind ravaged fields and pasture lands and putting both farmers and pastoralists at risk of severe food shortages.

It's predicted more than 25 million people in East Africa will experience food insecurity in 2020 with the locust infestations compounding the situation.

Some farmers lost 90 percent of their crops in the first wave of locust to hit Ethiopia, says Yimer Seid of Ethiopia's South Wollo agricultural department.

"I visited families who have no food in their house. They sold their animals," he says.

In 2018, two cyclones in succession unleashed rain in the immense sandy desert on the southern Arabian Peninsula known as the Empty Quarter. The moist sand and sprouting vegetation provided favorable conditions for the locusts to thrive.

Solitary desert locusts are usually harmless. If they are packed densely enough, however, the insects change behavior and even appearance, forming large groups that devour everything in their path. Groups of young, wingless locusts form bands, which eventually mature into fast-moving swarms.

In the Empty Quarter, the locusts multiplied unnoticed for three generations, increasing their original number 8,000-fold before swarms migrated up the Arabian Peninsula to Yemen.

Locusts are common in Yemen but its ongoing civil war has devastated the country's ability to monitor and fight the insects.

From Yemen, in 2019 the desert locust swarms traveled north to Iran then to Pakistan and India.

They were also carried on the wind across the Red Sea to northeastern Ethiopia, south Eritrea and Somalia, where higher than average rainfalls over the 2019 summer allowed the locusts to proliferate.

That's when FAO declared an emergency, increasing and prioritizing equipment and monitoring efforts.

"We started fast tracking everything because we knew the situation was going to be out of control very quickly," says Cressman from the FAO.

But despite FAO and other organizations moving as fast as they could to curb the spread of the locusts, their sheer numbers meant they were already hard to control.

In December 2019, the insects started swarming into Kenya in what has turned into the worst outbreak the country has experienced in 70 years.

To make matters worse, East Africa's short rains, which normally fall from October to December, continued into 2020, allowing this first wave of swarms to mature and start laying eggs. 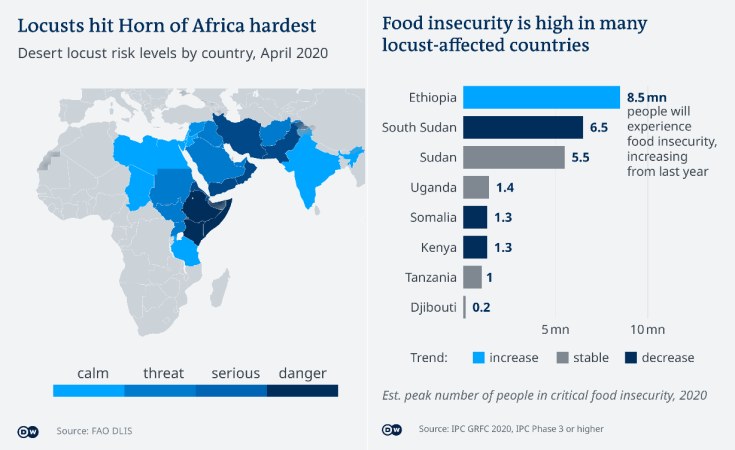 Now, the region has to fight this new generation as it hatches, before it creates the new swarms predicted for June.

Managing locust swarms is best done before they even form. Regular monitoring is essential, since small numbers of the insects can be controlled relatively easily.

"It's not difficult to kill a locust. You put pesticide on the locust and it dies," says Cressman.

Normally, this is done by teams on the ground spraying pesticides from hand-held tanks, reinforced by planes or helicopters.

The problem with the current infestation is its sheer scale, he says.

"It's like a forest fire. If you find it really small as a campfire, you just put it out. But if you miss it, then it becomes a wildfire, and the problem gets much more difficult and expensive to control."

Time of the essence

Authorities in the affected countries have already sprayed pesticides on thousands of hectares of land. But if the weather conditions don't dry up, that might not be enough.

Control operations are falling behind: In April, only a quarter of the area affected by locusts was treated. Locust populations are expected to increase 20- or even 400-fold in the months to come.

Spraying isn't the only way of weathering the devastation caused by the locusts.

In Ethiopia's South Wollo Zone, the community worked together in 2019 to bring in the harvest before the locusts could devour them.

"We harvested the crops in cooperation with everyone," says Yimer Seid. "There would have been around 100 people in a large field ... , all volunteers from the region."

He's also seen more examples of people in the community sharing crops and food with each other to make sure people don't go hungry.

Two crises at once

The coronavirus pandemic makes such community action much harder. Although Ethiopia isn't under a strict lockdown, the movement of people is restricted by a national emergency decree.

Normally, agricultural officers in South Wollo would monitor the locusts in the field, explained Seid. Now farmers send in their reports online or over the phone, making it harder to assess the situation.

Overall, though, monitoring efforts and pesticide spraying operations are continuing in Ethiopia as locust control counts as an essential service.

But with new swarms on their way, Ethiopia desperately needs to scale up its operations, says Fatouma Seid from FAO Ethiopia. This should include "more teams on the ground, more vehicles for the government and more pesticides on the ground in addition to the air control."

However, the current stock of pesticides will only tide over locust control in Ethiopia up to June, she says.

As for neighboring Somalia, the country currently has enough pesticide at hand to spray around 2,000 square km.

That will cover the first phase of controlling hoppers (the juvenile locust, which can't fly) up to July, says Alphonse Owuor, Crop Protection Officer with FAO Somalia.

"We have been in constant contact with the supplier since late 2019. They are aware of our requirements for the rest of the year and are on standby on the event we will need more supplies urgently."

African countries are much better equipped to tackle the locust threat than they used to be.

In the past, locusts plagues regularly swept across the continent. In the 1950s, the insects ate their way through countries in West and East Africa all the way to India and Pakistan in a plague lasting 13 years.

But in the last few decades, thanks to better monitoring and control, the infestations have tended to last for a shorter time and cover less area. Ethiopia and Somalia, for example, haven't experienced an outbreak of this scale in 25 years.

"The desert locust is just one long, continuous story," says Cressman. "It's about figuring out the current chapter of that story."

Food Security Crisis Looms, Experts Warn at Kigali Summit
Tagged:
Copyright © 2020 Deutsche Welle. All rights reserved. Distributed by AllAfrica Global Media (allAfrica.com). To contact the copyright holder directly for corrections — or for permission to republish or make other authorized use of this material, click here.