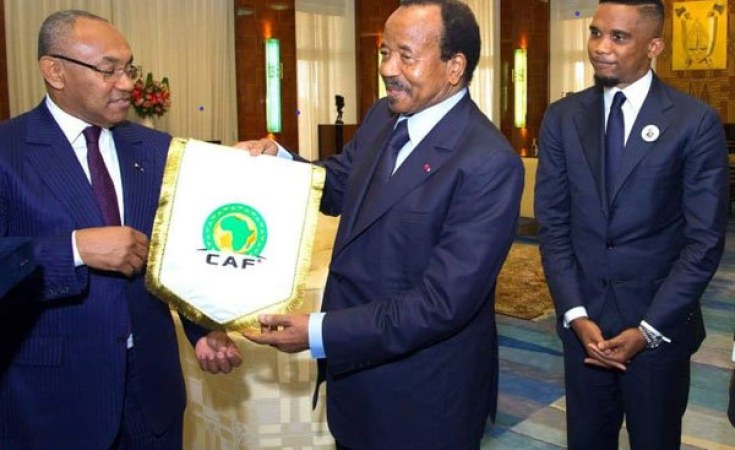 African football was not spared from the coronavirus pandemic. While some European leagues are set to resume, CAF president Ahmad Ahmad told DW he wants the outbreak under control first before competitions return.

Much like their counterparts around the world, the Confederation of African Football (CAF) officially suspended play in March. The situation on the continent is complicated and differs wildly from the realities in Europe.

Africa has already experienced epidemics such as Ebola outbreak in March 2014, the deadliest episode of the disease since its first detection in 1976. During the outbreak, the CAF chose not to suspend football. Games in the countries where the epidemics broke out were relocated to avoid the regional threat.

Past outbreaks mean Africa is not experiencing the coronavirus pandemic like other continents. As of May 11, Africa had recorded just over 64,500 cases of COVID-19 and around 2,000 deaths, according to data from Johns Hopkins University -- numbers that pale in comparison to the contamination rate in Europe.

Despite alarming predictions about the potential impacts of the health crisis, the question of whether African football can recover has been raised.

In an interview with DW, CAF president Ahmad Ahmad highlighted the difference in context, pointing out that it is not easy to draw conclusions when so few tests have been carried out.

"As we see the ratio of tests that have been carried out in these countries, it is always alarming because we lack visibility in the management of this pandemic," he said.

As a result, CAF remains cautious. Ahmad has been clear on the future of a probable resumption of football. For him, there is something more important for the people of Africa right now.

"There is a lack of visibility. We must wait. As president, I invite everyone to be very careful and wait for the situation to normalize. But beyond that, I do not want football to be a source of destabilization for the precautionary measures taken by the various governments to deal with the pandemic," he said.

Most African governments are actively encouraging hand washing and social distancing, but are up against a unique set of challenges. "The whole world is facing a very important health crisis, and every country on the continent of Africa has its own way of dealing with it."

"We have taken to stop football activities altogether. Our priority is first and foremost health, protecting players, protecting officials, and protecting the public."

Ahmad confirmed to DW that the continent's competitions would not resume while the COVID-19 situation in Africa is not under control. Leagues and tournaments had until May 5 to tell the governing body how they would proceed.

The decisions were unsurprisingly diverse. Most countries have canceled their championships without winners, relegation, or promotion. Mauritania has postponed its championship until September 2020. Tanzania is planning to resume behind closed doors, while Burundi will restart on June 1.

For clubs that find themselves in difficulty, CAF is searching for solutions and ways of providing support in conjunction with the authorities of each country, according to Ahmad. The confederation, meanwhile, has supplied financial aid to clubs in continental competitions by "releasing their prize money very quickly, without waiting until the end of the season."

As for the short-term financial repercussions, African clubs are often owned by patrons who invest their personal funds and therefore do not have the same obligations as their European counterparts.

While the crisis will take a toll on a national level, in general, clubs will not necessarily need to restart their leagues to save themselves financially as there's not as much liquidity in the sport.

Continental club competitions, such as the African Champions League and the Confederations Cup, do not generate as much money as those in Europe. TV rights deals for the competitions remain relatively low, and most clubs only make profit if they reach the semifinals.

That's just under half a million less than European teams collect for a group stage win in the UEFA Champions League. Meanwhile, ES Tunis' counterparts Liverpool reportedly pocketed a combined €74.35 million during their title-winning run in 2019.

Ahmad also highlighted the spontaneous solidarity shown by the African football family. Former footballers such as Samuel Eto'o and Didier Drogba, as well as current stars such as Sadio Mane and Mohamed Salah, have significantly contributed financially to the fight against the pandemic on the continent and have participated in several awareness campaigns on preventative measures like hands washing and the use of masks.

Until a way out of the COVID-19 crisis is found, football will not be the priority of the African continent. For Ahmad, "the priority is health. If this crisis persists, it is like any phenomenon of human life. We cannot send our young people to the slaughterhouse."