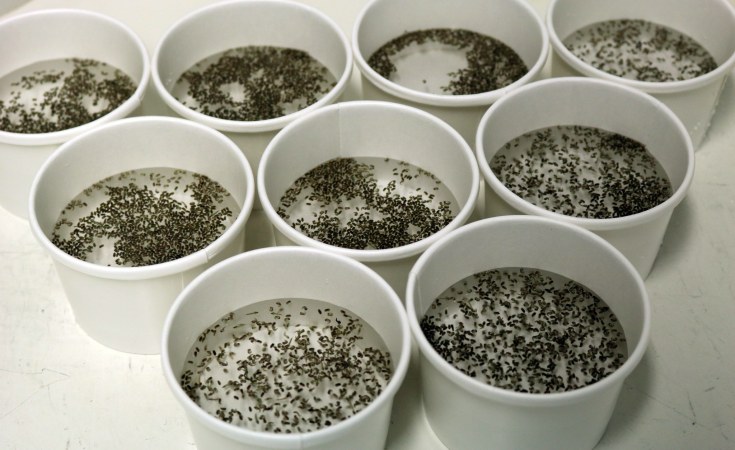 NIAID/Flickr
Anopheles gambiae mosquito pupae separated from larvae, collected in cups, and ready to be placed in a cage to capture emerging adult mosquitoes for malaria research.
Inter Press Service
By Busani Bafana

Bulawayo, Zimbabwe — Experts across Africa are warning that as hospitals and health facilities focus on COVID-19, less attention is being given to the management of other deadly diseases like HIV/AIDS, tuberculosis and malaria, which affect millions more people.

"Today if you have malaria symptoms you are in big trouble because they are quite close to COVID-19 symptoms, will you go to the hospital when it is said we should not go there?" Yap Boum II, the regional representative for Epicenter Africa, the research arm of Doctors Without Borders, told IPS.

"Hospitals are struggling because they do not have the good facilities and equipment; it will be hard to take in a patient with malaria because people are scared. As a result the management of malaria is affected by COVID-19," Boum, who is also a Professor of Microbiology at Mbarara University of Sciences and Technology in Uganda, said, pointing out that HIV/AIDS and tuberculosis were also being ignored.

In fact, the World Health Organisation (WHO) has warned that four times as many people could die from malaria than coronavirus.

"With COVID-19 spreading, we are worried about its impacts on health systems in Africa and that this may impact negatively on the delivery of routine services, which include malaria control. The bans on movement will affect the health workers getting to health facilities and their safety from exposure," Akpaka Kalu, team leader of the Tropical and Vector-borne Disease Programme at the WHO Regional Office for Africa, told IPS.

The WHO has urged member countries not to forget malaria prevention programmes as they race to contain the COVID-19 spread. Without maintaining prevention programmes, i.e. should all insecticide-treated net campaigns be suspended and if access to effective antimalarial medicines is reduced because of lockdowns, malaria deaths could double to 769,000 in sub-Saharan Africa this year. At the same time the agency has predicted that some 190,000 people could die of COVID-19.

Though preventable and treatable, Africa is battling to eliminate malaria despite a decline in cases over the last four years.

The continent has the highest malaria burden in the world, accounting for 93 percent of all cases of the disease.

Malaria is one of the top ten leading causes of death in Africa, killing more 400 000 people annually.

Poorly equipped and understaffed national health services in many countries in Africa could compromise efforts to eliminate the malaria scourge, noted Kalu.

Africa must cope with COVID-19 without forgetting malaria

Mamadou Coulibaly, head of the Malaria Research and Training Center at the University of Bamako, Mali, concurred that the pandemic was straining health systems in developing countries. He urged malaria-endemic countries not to disrupt prevention and treatment programmes.

"To avoid this catastrophic scenario, countries must tailor their interventions to this challenging time, guaranteeing prompt diagnostic testing, treatment, access and use of insecticide-treated nets," Coulibaly, who is also the principal investigator of Target Malaria in Mali, told IPS.

Mali is one of the top 10 African countries with the high incidence of malaria.

Kalu stressed that domestic financing for malaria was needed. He commended the Global Fund to Fight AIDS, Tuberculosis and Malaria and other private sector partnerships that have provided funds for malaria. But he pointed out that this was neither ideal nor sustainable unless national governments contributed a lion's share to malaria control.

There is a $2 billion annual funding gap when it comes to malaria prevention, which should be closed to sufficiently protect people in malaria affected countries, according to the RBM Partnership to End Malaria, a global private sector initiative established in 1998. The partnership has sourced funding and equipment for malaria prone countries, providing mosquito nets, rapid diagnostic tests and antimalarials.

While pleased with progress made towards eliminating malaria in Africa since 2008 when the Abuja Declaration on Health investment was signed, Kalu said Africa could do better.

In 2001 African governments drew up the Abuja Declaration to invest 15 percent of the national budgets in improving health care services.

Nearly 20 years later, a handful of countries such as Swaziland, Lesotho, Ethiopia, Liberia and Burundi have invested in building their health systems, according to 2016 WHO assessment report on public health financing for health in Africa. Many African countries have reduced their spending in health as a percentage of total public expenditure than they did in the early 2000s.

For every $100 that goes into an African nation's state coffers, on average $16 was allocated to health. Of this amount only $10 was spent, with less than $4 going to the right health services.

"For the first time in our lifetime, the human being and the world is realising that the most important thing we have is our health," said Boum, questioning why African governments have all not prioritised health spending despite the Abuja Declaration.

"With our borders closed we are all being taken care of in the poor health system that we have built," Boum, told IPS. "There is no more flying to India, London or the United States. We are all in the same boat because we have not invested what we were supposed to invest and I hope beyond the pandemic, we will make health care a just cause and even manage to go beyond the 15 percent health investment agreed upon."

With the current level of investment in health systems, the WHO fears Africa will not achieve the United Nations Sustainable Development Goals (SDGs), particularly SDG3 on ensuring healthy lives and wellbeing for all and ending malaria by 2030.

"We do not want a situation where we are protecting people from COVID-19 and they die of malaria and other diseases," Kalu told IPS.

"We are not asking governments to put money in malaria alone but in national health systems. COVID-19 is showing that Africa needs facilities and equipment which it does not currently have to effectively deal with the pandemic."