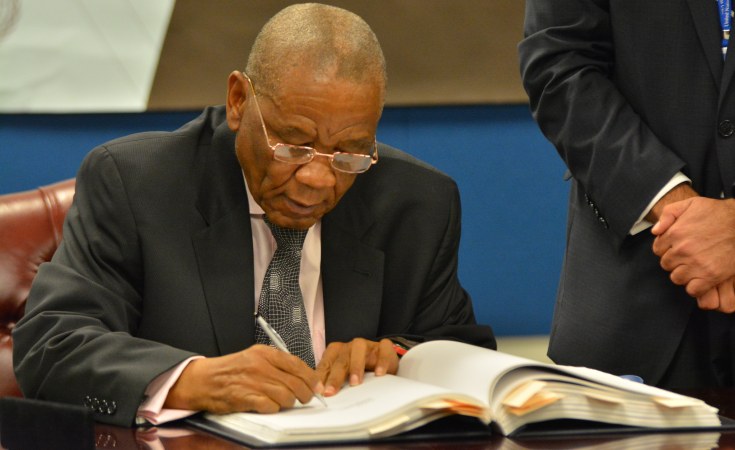 The prime minister of the African country has been under pressure to quit over a case in which he and his wife are suspected to have conspired to murder his former wife. The allegations caused his government to collapse.

Lesotho Prime Minister Thomas Thabane will step down on Wednesday, bringing an end to a long-standing political crisis triggered by his alleged involvement in the murder of his ex-wife.

His coalition collapsed in parliament on Monday, and he was asked to step down by next week to make way for a new government.

Thabane's five-year tenure was due to last until 2022. His party has nominated Finance Minister Moeketsi Majoro as his successor.

The prime minister will inform King Letsie III - the monarch of the southern African kingdom - of his decision. "I will have to go and inform him that I am leaving," Thabane said. "Normally he would say 'fine.'"

The 82-year-old prime minister and his current wife, Maesaiah, face prosecution in the killing of his former wife.

In 2017, Thabane and his then estranged wife Lipolelo, 58, were going through a bitter divorce. Lipolelo was shot and killed outside her home two days before Thabane's inauguration.

The prime minister has since been named a suspect but is yet to be formally charged. Maesaiah, who is also alleged to have been involved in the murder, has been charged.

The case divided the prime minister's All Basotho Convention (ABC) party and has triggered sporadic protests over the past few months.

Evidence allegedly linking Thabane to the murder emerged in January, and soon after his party announced that he has agreed to step down.

Resignation in exchange for immunity denied

Thabane had sought immunity from prosecution in the case, raising questions over whether it was included in the deal to dissolve the government.

However, this has been denied. "The prime minister's prosecution ... is not part of this deal at all, we are not even thinking of considering it," Democratic Congress party spokesman Montoeli Masoetsa said. "It is not even within our scope and that is entirely with the courts of law."