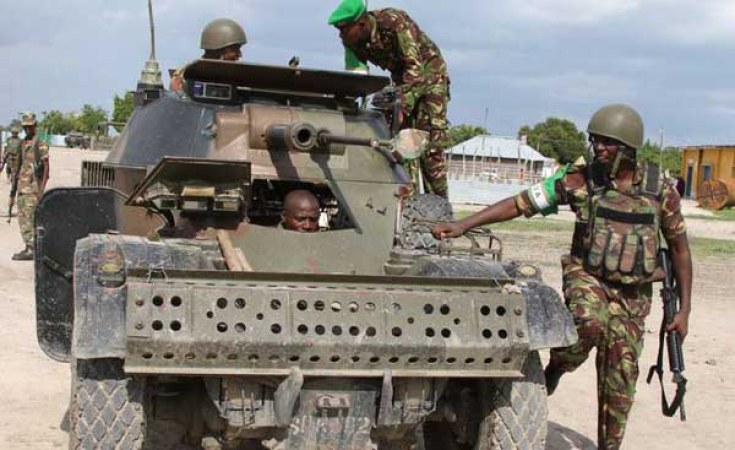 The Kenya Defence Forces (KDF) has established pillars that will guide its withdrawal from Somalia after eight years.

Kenya and other countries contributing soldiers to the African Union Mission in Somalia (Amisom) are expected to exit by December 2021.

The plans are contained in a new book, War for Peace: Kenya's Military in the African Mission in Somalia, 2011-2020 launched on Friday by immediate former Chief of Defence Forces Samson Mwathethe.

The first pillar is creating conditions for the exit of Amisom from Somalia. It will involve reforms in the Somali National Army and enabling the country's security forces to lead operations towards sustainable peace.

The second is creating a stable, peaceful and prosperous Jubbaland as a corridor free of al-Shabaab.

"This will involve securing routes in Jubbaland accessible to and used by al-Shabaab, including areas in Jilib, the roads to Kenyan border points (Liboi, El-Wak, Mandera, Gherille and Boni forest) and Indian Ocean ports of Ras Kamboni, Kuday, Kismayu and Barawe," the book says.

That will also be achieved by creating harmony between the people of Jubbaland and the rest of Somalia by consolidating federalism and maintaining peace with Mogadishu and neighbouring countries.

The third pillar is having a comprehensive management control system to secure the Kenya-Somalia border, a process that will involve "surveillance, trenches, roads and chain-link fences".

This will involve enhancing intelligence and security operations.

The fifth pillar involves partnerships through strengthening the agreement involving Kenya, Somalia and Ethiopia on common security concerns and agenda. It also involves enhancing collective security by involving neighbours in the Horn of Africa through the Inter-Governmental Authority for Development and the East African Community.

The targets will be young people, women and faith-based organisations.

It will also involve collaborating with regional agencies to facilitate joint training and exercises geared towards countering terrorism.

The UN Security Council Resolution 2472 declared on May 31, 2019 ordered the withdrawal of all contingents from Somalia.

The extraction will be on condition that the council assesses the viability of exit options and preparedness of Somali security forces.

Amisom has requested a review of the withdrawal timetable.

"Neighbouring countries are more concerned about the possibility of the resurgence of al-Shabaab or the rise of a similar extremist movement after the end of Amisom in 2020," the book says.

"These legitimate concerns are informed by the history of interventions in Somalia, Iraq, Afghanistan and other countries."

It cites the abortive UN Operation in Somalia (Unosom), whose disarmament efforts degenerated into clashes between its troops and a militia loyal to faction leader Farah Aideed.

The UN Security Council responded by withdrawing Unosom II and the United States changing its policy and approach to peace operations in Africa. Major global actors abandoned Somalia to warlords.

The book says an exit strategy for Amisom must be comprehensive, with clear timelines and encompassing every actor.

"Two key factors should be considered. First, a transition of Amisom work to Somali-led operations and; secondly, from military to police-led operations," it says.

Other than the pillars, it provides an account of KDF's engagement in Somalia.

"The book is a tribute to our soldiers who fought and paid the ultimate price. It is an invaluable read for students, experts and practitioners of military history and strategy," Gen Mwathethe says in the book.

U.S. Regrets Civilian Deaths in Somali Airstrike
Tagged:
Copyright © 2020 The Nation. All rights reserved. Distributed by AllAfrica Global Media (allAfrica.com). To contact the copyright holder directly for corrections — or for permission to republish or make other authorized use of this material, click here.