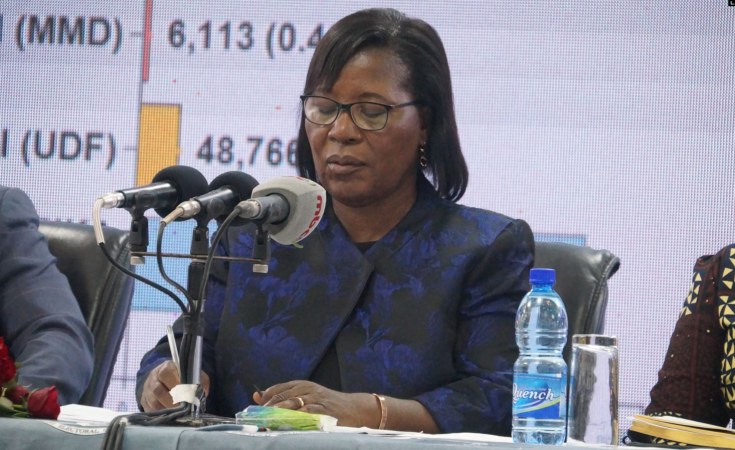 Embattled Malawi Electoral Commission (MEC) chairperson Jane Ansah Wednesday dramatically refused to take journalists' questions who wanted to ask her about her future at the commission following Supreme Court of Appeal ruling which generally upheld the verdict of the Constitutional Court in the Presidential Election case.

She just waved away the hordes of the journalists who swammed her at a high level elections meeting, the national consultative for electoral stakeholders in Mangochi.

Ansah turned her back and walked away as reporters' shouted questions at her.

"Are you going to resign, if so when?" shouted one Nyasa Times correspondent.

The journalists finally gave up to force her to speak.

The Supreme Court ruling upheld a Constitutional Court ruling which ordered a fresh election after annulling the May 21, 2019 polls following widespread anomalies and irregularities.

Ansah told the media before the Supreme Court ruling that she would resign as chair of MEC if the courts found that her commission mismamaged the May 2019 elections.

In the meeting, some members were against allowing state broadcaster MBC to make a presentation on its plans for campaign and polling coverage.

But MEC director of media Sangwani Mwafulirwa said that MBC was invited because it has a constitutional mandate to cover elections according to the parliamentary Act that governs elections.

There were also heated and emotional moments during the meeting.

Chairperson for Legal Affairs Committee of Parliament Kezzie Msukwa and secretary-general of Peoples Party Ibrahim Matola asked Ansah to explain why she went ahead to set presidential elections on July 2 when she knew that the power to do so lies with Parliament.

Msukwa said parliament set May 19 as a date for fresh polls, but Ansah quashed the date and opted for July 2.

He accused MEC of confusing and holding Malawians to ransom through changing of electoral dates, which he describes as unfair.

But calm looking Ansah said MEC did not use the date set by parliament for fresh elections because the bill containing the dates was not assented to by President Peter Mutharika.

She said in the absence of that, the commission settled for July 2 in line with Constitutional Court ruling.