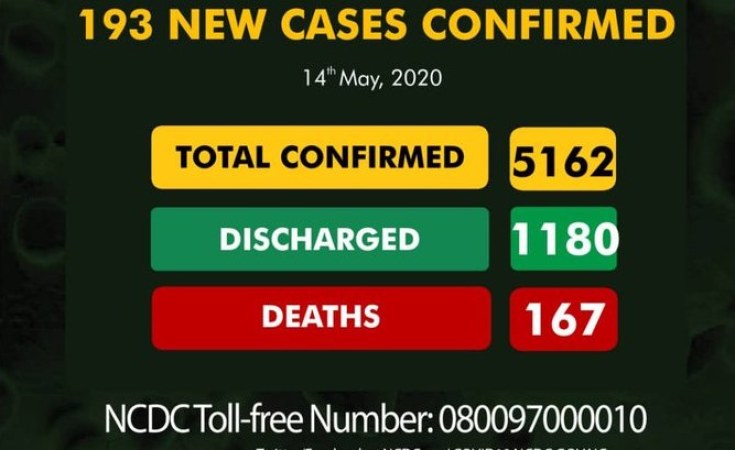 Nigeria, on Thursday, recorded 193 new cases of COVID-19 as the number of infected people exceeded 5,000. Three people also died from the virus on Thursday.

According to the Nigeria Centre for Disease Control (NCDC), with Thursday's figure, the total tally of infected people in the country rose to 5,162, from 4,971 reported on Tuesday evening.

All the reporting states already had at least a case of the virus.

Nigeria has so far tested 30,657 persons since the beginning of the pandemic in the country.

A breakdown of all the confirmed cases so far shows that 5,162 infections have been reported in Nigeria since the index case in February. Of that number, 3,815 cases are still active, 1,180 have recovered and have been discharged, and 167 deaths have been reported.

"We apologise to @contactkdsg and remain committed to ensuring the release of accurate and reliable data," it said.

Since the federal and state governments eased the lockdown in various states, many Nigerians have flouted the guidelines put in place by the government to combat the spread of the disease.

The Secretary to the Government of the Federation, Boss Mustapha, during the Presidential Task Force briefing on Thursday said the countdown to the end of the first phase of eased lockdown approved by the president begins on Thursday so that the economy could gradually reopen.

He said the government is also assessing the level of compliance with the guidelines and the impact on slowing down the spread of COVID 19.

Mr Mustapha said, "The statistics on COVID 19 have continued to come out daily and the indications are that our testing strategy is yielding results because we can now give care to those that need it."

"In due course, we shall make further recommendations before the second phase commences," he said.

What's to Show for Zimbabwe's 41 Years of Independence?
Soccer