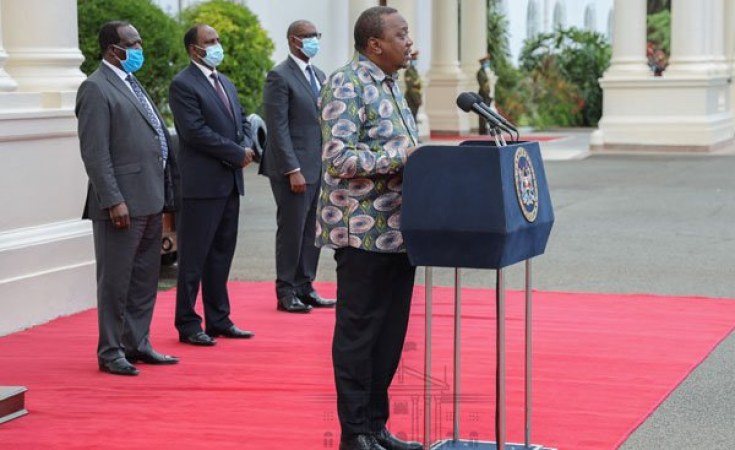 Truck drivers have complained about the long wait they have to endure for their Covid-19 test results at border crossings, noting that those ferrying perishable goods are incurring huge losses.

But Health Chief Administrative Secretary Rashid Aman said Friday that they all have to be tested, amid rising concerns that they are a weak link in the fight against the pandemic.

"Samples are taking longer because they have to be transported to Nairobi for testing. It takes a maximum eight hours for the results to be out," he said.

He conceded that tonnes of goods will have to go bad unless the truckers get to the point of testing on time.

"They all have to be tested. All have to get the certificate. If they have to beat the queue, then they should be there on time," he said.

The country's Covid-19 infections had increased by 23 (18 males and five females) totalling to 781, he said.

This was recorded from 2,100 samples tested in the previous 24 hours. All the 23 positive cases are Kenyans.

The new cases are distributed in five counties: 11 in Nairobi, five in Mombasa, three in Kajiado, and two each from Kiambu and Wajir.

In Nairobi, the 11 cases are from Embakasi (six), Kamukunji and Lang'ata (two cases each), while Starehe recorded one case. The five cases in Mombasa are from Mvita.

Truck drivers are among essential service providers as Kenya fights to contain the Covid-19 pandemic.

However, as the virus continues to spread, border testing has revealed a high number of cases in the population and alarm is growing about their potential to be super spreaders of the virus.

Trucker Felix Oduor has been on the move for the past three months. He does not know when he will join his family in Nairobi, though he has tested negative and is moving around with his certificate.

He wants to keep moving until things get back to normal as he fears that he might infect his family.

At around noon on Monday, he was in Salgaa, Nakuru County, heading for Kampala from Mombasa. He had to drop off sodium sulphate and would arrange for more loads before the weekend for the trip back to Mombasa.

Throughout his journey, Mr Oduor moves from one load to the next, one truck stop to another to keep business going.

Like so many other long-haul truckers who have now become the centre of the virus spread in East Africa, he too is worried.

He is dropping off the goods so that the rest of us can stay put. Using the Mombasa-Nairobi route, his Covid-19 certificate had to be stamped and temperature checked.

He only stops at government-designated stop-overs, and before he enters Uganda in Malaba, another test has to be conducted

Being confined to small spaces, disconnected from family and friends, unsure what the days ahead will bring, loneliness has become part of their job.

They transport goods from the coast to Tanzania, Uganda and beyond into the Democratic Republic of Congo and other central African nations. Along the way, they often interact with several people.

For the viruses (HIV and Covid-19), truck drivers are at higher risk and have been associated with migratory labour patterns and transportation routes.

A recent study among 3,805 truckers in Kenya found that 55.9 per cent had paid for sex in the past six months and 46.6 per cent had a regular partner along their trucking route in addition to a wife or girlfriend at home.

Truckers can be a conduit for spreading viruses across partner types (commercial, regular partners on their trucking route, wives or girlfriends at home), as well as across national and international borders.

Past studies conducted in Kenya found that truck drivers face a higher risk of contracting and spreading viruses, like HIV/Aids, because they are a highly mobile vulnerable group that traverses the country and often spends nights stopped in temporary locations, where exposure is high and testing and protection use is low.

Dr Moses Masika, a Kenyan virologist at University of Nairobi's School of Medicine, said there is a need for robust testing in the population to ascertain that they are at risk.

"They could be at risk, but making that statement without any solid evidence can lead to stigma. We need to test them first," he said.

The classification has prompted the government to consider the population as at risk of spreading the virus, leading to the mass testing of the population after it emerged that Kenya has been exporting Covid-19 to neighbouring countries.

So far, the government has confirmed over 100 positive cases in the population.

On Monday alone, out of the 28 new cases reported, nine were Kenyan truckers who had come into the country through the Namanga crossing from Tanzania.

Dr Aman said the decision to test transit cargo drivers was reached after some Kenyan drivers were confirmed positive.

The decision by the Kenyan government comes as Uganda is exploring the option of having trucks entering the country stopped at the border and then picked up and driven by Ugandan drivers to their destinations or to the next border point.

On May 17, the Ugandan newspaper Daily Monitor reported that 18 Kenyans were among 37 truck drivers that had tested positive for the virus in Uganda after crossing into the country.

On Thursday, eight truck drivers from Tanzania were denied entry into Kenya after they tested positive for Covid-19.

East African countries have come up with new guidelines to be used by truck drivers to curtail the spread of Covid-19 along the transport corridors.

Through the director of public health, Dr Francis Kuria, the guidelines will be used by the truck drivers along the transport corridors between Mombasa and neighbouring countries, including Tanzania.

Kenya Backs Down on Rail Use Order For All Cargo
Tagged:
Copyright © 2020 The Nation. All rights reserved. Distributed by AllAfrica Global Media (allAfrica.com). To contact the copyright holder directly for corrections — or for permission to republish or make other authorized use of this material, click here.