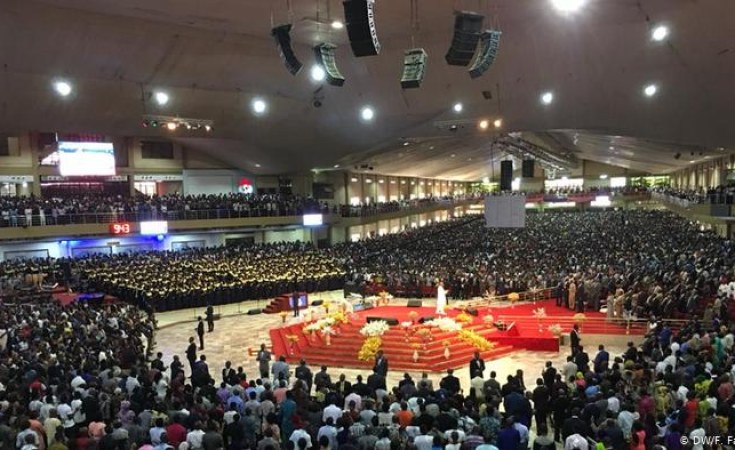 Growing rates of coronavirus infections have led Nigeria to slow down a planned relaxing of confinement measures. Religious gatherings remain banned, inflaming the ire of many mosque and church leaders.

Among religious leaders there is a small but vocal minority who reject Nigeria's coronavirus lockdown.

Some reacted angrily to Monday's announcement by the Nigerian government prolonging a ban on religious services, among other measures, especially in hard-hit regions, such as Kano -- a predominantly Muslim city in the north of the country.

The hotspot for new coronavirus infections has seen its rate spike to 852 cases and 36 fatalities. Nigeria has almost 6,000 infections and 182 deaths from the disease.

Several imams have been suspended for violating state-imposed measures to slow down the spread of COVID-19 in a country whose health system risks being overwhelmed by the pandemic.

With a threat of this magnitude hanging over Nigeria, why is there so much resistance against rules that seem reasonable?

"First of all it has to do with the nature of traditional society," said northern Nigerian analyst Aliyu Tilde. "People have a strong attachment to religion."

"Some even think that this is a conspiracy to prevent Muslims from praying," and that there is no such thing as a coronavirus, Tilde explained, tying this attitude to the high illiteracy and poverty rates prevalent in the regions.

Rejection from all denominations

Many Muslims, however, including journalist Baballe Mukhtari, agree with the confinement rules, even if they have deeply affected their lives.

"I am happy, because I am now with my family. I don't go out, I don't attend mosque," Mukhtari told DW. "I pray at home. I do it for the sake of my health and my family."

Nigeria's Christian community, mainly localized in the south, has its share of fierce opponents of the lockdown.

Church leaders, such as bishop David Oyedepo in Lagos, are agitating for the reopening of churches. Oyedepo is the founder of the Living Faith Church, one of the largest evangelical megachurches in Nigeria.

Bishop Oyedepo uses his services and prayer sessions, which are now run online, mostly to voice demands for the reopening of churches.

In his habitual colorful style, Oyedepo calls the shutdown an attempt to cripple Christianity.

"The church is God's banquet hall where we are fed with spiritual food to keep us alive and strong. So whatever stops the church from fellowshipping [sic] is out to destroy what God is building," he said.

"There must be a devil behind it. It is not virus, it is demon, there is a demon at work behind the scene, I told you in the morning I can smell a rat."

Why should markets open and churches not?

Among Nigerian Christians, the resistance against government measures stems mainly from Pentecostal Churches.

Some faithful would agree with Mayowa Adebola, who says that he cannot understand why the government would close down churches, while allowing crowded markets to remain open.

"I went to Mile 12 market. Without exaggerating, I probably had body contact with 500 people," he told DW, saying that prayer houses are much more organized and safe. "So there is no genuine reason for locking up churches in Nigeria."

This is an argument often heared in Nigeria, said analyst Tilde, where the differences between prayer house and markets is easily forgotten. "Markets are usually open-air places, while mosques are enclosed. The togetherness in markets is not as intense and chaotic as in the mosque, where you congregate body to body and you shake hands," he told DW.

Tilde warned the central government against giving in to the demands of Muslims that the ulemas be reopened: "A lot of the teachers here are about 50. The children will survive, but the teachers will die."

Pastor Tunde Bakare, head of the Latter Rain Assembly Church, agrees. Bakare chides religious leaders who are calling for a reopening of prayer houses, especially in the case of organizations with large facilities.

"Instead of criticizing the government, they should collaborate with them," Bakare said. "They must be prepared to offer some of their halls for the government to use as isolation centers."

Authorities announced on Monday that they would start implementing precision lockdowns in all areas where there is a "rapidly increasing number of cases," the head of the country's coronavirus task force, Boss Mustapha, said.

As he announced a nighttime curfew and the mandatory use of masks, he complained that noncompliance with social distancing measures "was rampant."

Testing for coronavirus symptoms has been another key problem across Nigeria.

Only 35,345 samples have so far been screened in Africa's most populous nation of 200 million people. This worries Tilde.

"[The] government must improve testing," he said. "It is a shame that Nigeria has only about 10 laboratories for testing or so. Testing must be intensified."

Sam Olukoya and Zainab Mohammed contributed to this article.