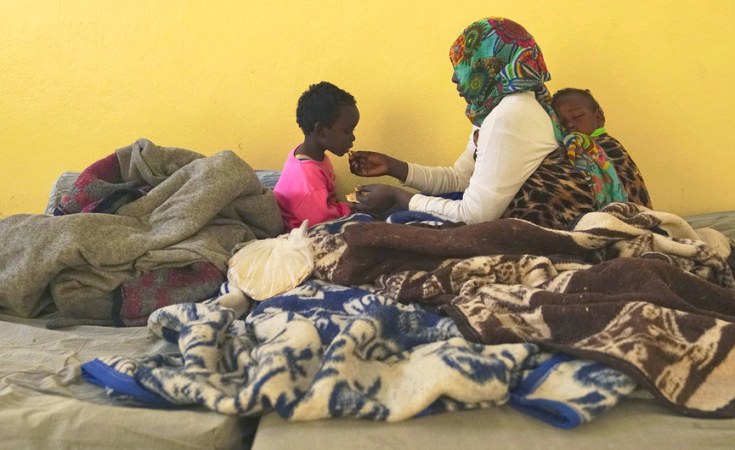 Giles Clarke/OCHA
A detainee mother, with sleeping baby on her back, feeds her other child some bread inside the female room of a detention centre in Benghazi, Libya.
UN News Service

The civil war in Libya is in danger of intensifying as foreign intervention grows and the spectre of the COVID-19 pandemic adds to a deepening sense of insecurity, the head of the UN Support Mission in Libya (UNSMIL) told the Security Council on Tuesday.

Stephanie Williams, who is also Acting Special Representative of the Secretary-General for Libya, said on Tuesday that while the rest of the world adjusts to life with the novel coronavirus, Libyans have dealt with almost constant bombardment and frequent water and electricity outages during the holy month Ramadan.

At the same time, an "alarming" military build-up is underway as foreign backers send increasingly sophisticated and lethal weapons to the warring sides - the UN-recognized Government of National Accord (GNA) and the so-called opposition Libyan National Army (LNA) led by General Khalifa Haftar. The General's forces began laying siege to southern parts of the capital Tripoli, more than a year ago.

The vast majority of the 58 civilians killed and 190 injured since 1 April are attributed to forces affiliated with General Haftar, she said, adding that those guilty of crimes under international law must be brought to justice.

"From what we are witnessing in terms of the massive influx of weaponry, equipment and mercenaries to the two sides, the only conclusion that we can draw is that this war will intensify, broaden and deepen - with devastating consequences for the Libyan people", she told the Council.

"As the foreign intervention increases, the Libyans themselves are getting lost in the mix, their voices crowded out. We must not let Libya slip away. We must enable responsible Libyans to write their own future."

She urged Council members to come together and apply "consistent and credible pressure" on those regional and international actors that are fuelling the conflict, which has left one million civilians in need of humanitarian assistance.

"We can collectively write a different ending to this so far sad tale but only if we demonstrate a collective will to do so", she added as she presented the Secretary-General's latest report on UNSMIL.

Discussing the impact of COVID-19 on Libya, she reported 65 confirmed cases and three COVID-related deaths across Libya up to Monday - a low count that reflects low testing capacity, limited contact tracing and fear of social stigmatization.

According to the World Health Organization (WHO), however, the peak of the pandemic has yet to reach the country "and the risk of an intensification of the outbreak remains very high."

She expressed particular concern about the situation of migrants and asylum-seekers, including at least 1,400 who have been expelled this year from eastern Libya in violation of the country's international human rights obligations.

She went on to say that the fighting - compounded with the pandemic and an ongoing oil blockade that has cost Libya more than $4 billion - is aggravating an already fraught socioeconomic situation.

The weaponization of vital services is another worrying trend, she added, pointing to the cut-off of both water supplies from the Man-Made River and natural gas to electrical power plants.

Previous Story
Has Haftar's 'Ponzi Scheme' Imploded?
Next Story
Military Option in Libya Is Not a Solution, Says Rached Ghannouchi

Military Option in Libya Is Not a Solution, Says Rached Ghannouchi

Egypt's Parliament Approves Troop Deployment in Libya
Tagged:
Copyright © 2020 UN News Service. All rights reserved. Distributed by AllAfrica Global Media (allAfrica.com). To contact the copyright holder directly for corrections — or for permission to republish or make other authorized use of this material, click here.