Burundi Goes to the Polls As Authorities Clampdown On Social Media 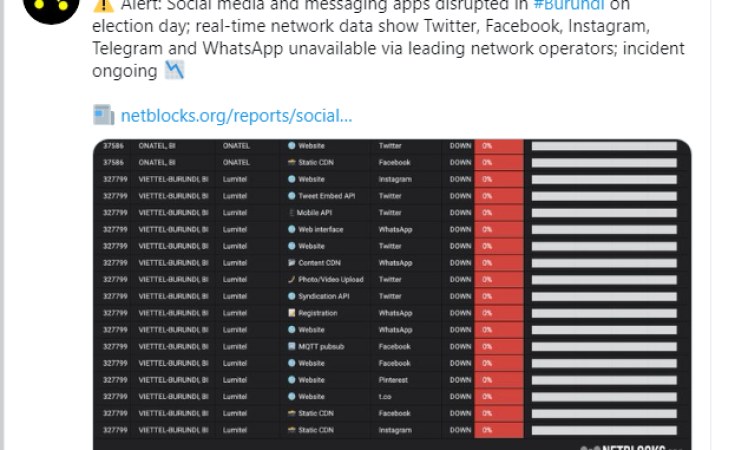 @netblocks/Twitter
A tweet from Netblocks.org, showing social media disruption during the Burundi election on May 20, 2020.
Radio France Internationale
By Daniel Finnan Follow

Burundians went to the polls on Wednesday for elections to choose a new president, parliamentarians and local councillors. However, voting was marked by a social media shutdown in the country and complaints about irregularities by the opposition.

Ruling party flagbearer Evariste Ndayishimiye told journalists that the elections were taking place in a secure environment. "Anyone wanting to disturb them will pay dearly," he added, speaking as he cast his ballot at the Bubu primary school polling station in Giheta, central Burundi, the Iwacu news site reported.

The election brings to end the rule of President Pierre Nkurunziza who was elected in 2005 following the end of Burundi's civil war. Ndayishimiye, chosen by the ruling CNDD-FDD to stand as their candidate, is widely expected to replace Nkurunziza as president.

Ndayishimiye faces six other candidates and Agathon Rwasa of the CNL party is considered the nearest contender. The CNL has already complained about several irregularities on polling day.

CNDD-FDD supporters were accused by the CNL party of voting on behalf of decreased people, prisoners and refugees. The opposition said the ruling party was using its youth wing, the Imbonerakure, to intimidate voters and detain its polling agents.

Some 5.1 million Burundians were eligible to vote in 14,778 polling stations.

Willy Nyamitwe, a advisor to Nkurunziza and former government spokesperson, denied that the internet in Burundi had been severed, but did not address the cut to social networks. Social media users in Burundi reported having to use a Virtual Private Network (VPN) to bypass the government's restrictions.

The social media shutdown was "planned", said opposition leader Rwasa, according to Iwacu. "It's not WhatsApp which votes, it's Burundians. There's no point in cutting communications," Rwasa told journalists.

The election campaigning period was characterised by increasing political violence and concerns about the spread of Covid-19.

Provisional results are expected on 25-26 May and if no candidate achieves a majority a second round of voting will take place on 19 June.

Victory for Burundi Ruling Party Candidate - Provisional Results
Tagged:
Copyright © 2020 Radio France Internationale. All rights reserved. Distributed by AllAfrica Global Media (allAfrica.com). To contact the copyright holder directly for corrections — or for permission to republish or make other authorized use of this material, click here.

Silencing the Guns - a Focus on Peacebuilding
Corruption