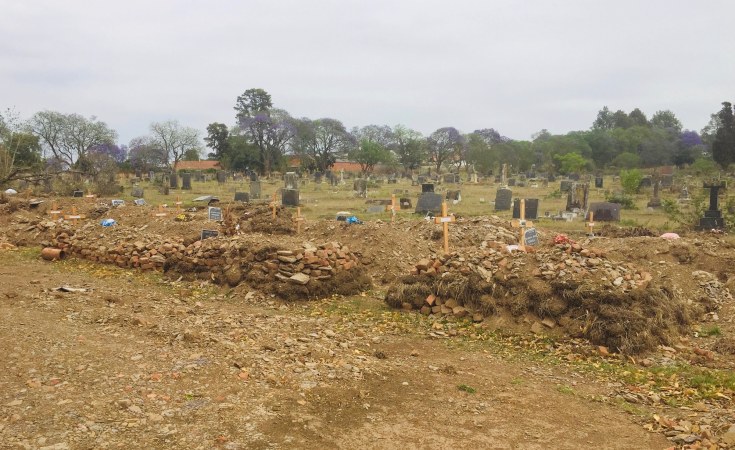 From building cemeteries away from human settlements to erecting fences around graves, South Africa is drawing up plans to protect the country's water supply from contamination if mass coronavirus burials become a necessity.

With researchers noting that little is known about how long the novel coronavirus survives in water, South Africa wants to avoid sudden, poorly planned burials that could result in the virus or other pathogens passing into water supplies.

"Cemeteries are areas of potential water contamination from pathogens in decomposing bodies," said Matthys Dippenaar, a groundwater expert from the University of Pretoria.

"But this has not been investigated for COVID-19. It is still possible that it can exist in water."

Around the world, countries such as the United States, Ecuador and Nigeria have been forced to rethink burials - from finding new space to bury the dead to streaming funerals - as novel coronavirus death rates have soared.

"(The pandemic) is a wake-up call," said Pepe Dass, chairman of the South African Cemeteries Association (SACA), a nonprofit administered and managed by municipal officials.

"If we choose burial sites that have potential to impact the environment, with no mitigation plans, there is high risk for groundwater contamination," Dass told the Thomson Reuters Foundation over the phone from Durban.

While finding enough physical space for a mass burial site is a priority, the depths and locations of graves and how bodies are buried are all critical to ensuring that water sources do not get contaminated, according to SACA.

South Africa has more than 12,700 confirmed coronavirus cases and about 238 deaths, according to a global tally by Johns Hopkins University.

For Dass, the worry is that if the death rate rises to even 10 burials at the same cemetery every day - with national deaths currently averaging 10 per day - then this would put a strain on existing resources.

If the burials are poorly planned, he said, it could raise the risk that viruses, bacteria or even embalming chemicals could migrate through soil and into the country's groundwater supply, making those who drink from it sick.

"We cannot have last-minute plans to deal with mass burials," said Dass. "We need to ensure we are prepared for what may come next."

Eunice Ubomba-Jaswa, a research manager at the Water Research Commission, which works with the Department of Water and Sanitation, said the government has directed municipal authorities to start looking for potential mass burial sites.

"If cemeteries are constructed and sited properly there is no additional risk of water contamination occurring due to COVID-19 burials," she said in emailed comments.

In March, the SACA released a set of guidelines to help municipalities prepare for emergency mass burials and cremation of COVID-19 victims.

They say burial sites should be in areas where the water table is at least 2.5 metres deep and the soil is a fine-grain mix of sand and clay, giving it low permeability.

While similar to the guidelines already in place for standard burials, the new recommendations take into consideration last-minute measures such as potentially expropriating additional land into existing cemeteries.

The regulations also reference the possible need to relax certain environmental regulations in emergency situations, such as reducing the distance between burial sites and residential areas from 500 metres to 100 metres.

"Cape Town, Johannesburg, Ekurhuleni and other metro municipalities have already begun identifying land for mass burials," said Dass, adding long trenches that can hold 20 bodies at a time are a possibility for the future.

"Cremation is also an option, but the majority of South Africans choose to bury for cultural reasons."

But in rural areas, he noted, people sometimes have no choice but to get their water from boreholes in their local cemeteries.

"People will go to a cemetery to use its water and electricity supply if they do not have this closer to home," putting them at further risk of ingesting contaminants, he said.

Some viruses - like polio - can move through soil and groundwater, and it's possible the novel coronavirus could do the same, noted Akebe Luther King Abia, a microbiologist at the University of KwaZulu-Natal in Durban.

That could be a problem in South Africa, where rapid urbanisation means many graveyards are being encroached by human habitats, he said.

"Given the high infectivity of coronavirus, it would be best to select sites for the mass burial of COVID-19 victims far from any human settlement," Abia said.

For Dippenaar, the fact that South Africa is trying to get ahead of any future spike in coronavirus deaths is a vital step in mitigating the spread of the pandemic.

"South Africa has shown promising preparation. And they need to," he said. "This is both an issue of human rights and environmental rights."

(Reporting by Kim Harrisberg @KimHarrisberg, Editing by Jumana Farouky and Zoe Tabary. Please credit the Thomson Reuters Foundation, the charitable arm of Thomson Reuters, that covers the lives of people around the world who struggle to live freely or fairly. Visit http://news.trust.org)