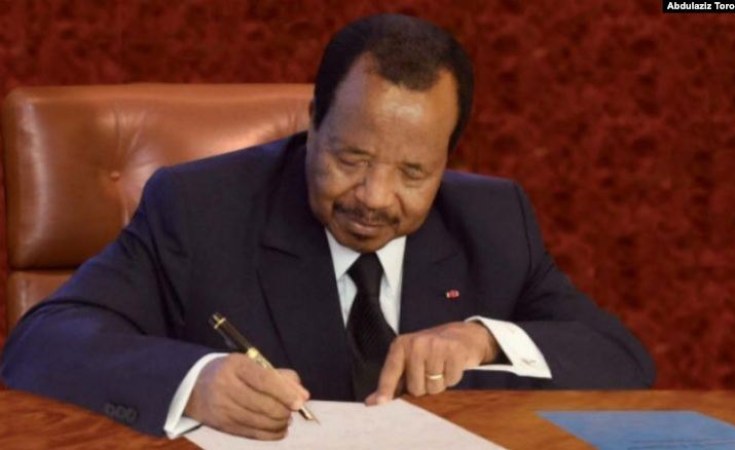 Cameroon is marking its national day Wednesday under coronavirus restrictions and amid ongoing clashes between the military and anglophone separatists.  President Paul Biya has spoken publicly for the first time about the pandemic.

Cameroon’s president, Paul Biya, broke his silence on the coronavirus pandemic Tuesday night in a televised address to mark the country’s national day.

Biya’s two-month absence and lack of commenting in public on the pandemic had raised speculation about his health.

The 87-year-old, who has ruled Cameroon since 1982, is known for his frequent travels overseas that spark criticism.

In a live broadcast on state television, he said there would be no festive events or military parades to celebrate this year as the number of COVID-19 victims continues to rise.

"Most of you have understood that it is necessary to put aside political squabbles and adopt a common front in the face of the insidious danger posed by COVID-19," he said.

Instead of public gatherings to mark their independence, Biya called on Cameroonians to follow social distancing guidelines and promote national unity.

He made no mention of the ongoing separatist conflict in western Cameroon that the U.N. says has cost more than 3,200 lives and displaced more than half-a-million people.

Cameroon’s military raised flags on public buildings Wednesday to mark the anniversary of a 1972 referendum for a unified state instead of the federal system agreed to when the country first gained independence.

Cameroon’s anglophone rebels refuse to honor national day, saying the referendum was unjust because it allowed the French-speaking majority to rule over them.

Ruling party supporter Enow Tanjong voted on the referendum and said the rebels should stop fighting and work for peace in the English-speaking regions.

"They should lay down their arms and come and be integrated in the economic progress of the country. Those who think that we should go and found another country are completely wrong. The world is looking forward to having countries come together and that should be what should guide us," said Tanjong.

Cameroon’s military said clashes with rebels this week killed at least six people, where separatists had called for a lockdown and vowed that national day would not be observed.

The rebels claimed on social media to have abducted at least nine people they said were watching national day TV programs.  Their claim could not be independently confirmed.

Dorothy Njeuma is a Biya supporter but said the over-centralization of power by the central government in Yaoundé was provoking the separatists.

The conflict started in 2016 when protests by English-speaking teachers and lawyers against the dominance of French-speaking Cameroonians led some to take up arms.

Cameroon’s military declared war on the rebels, who have been fighting since 2017 to create an independent, English-speaking state.