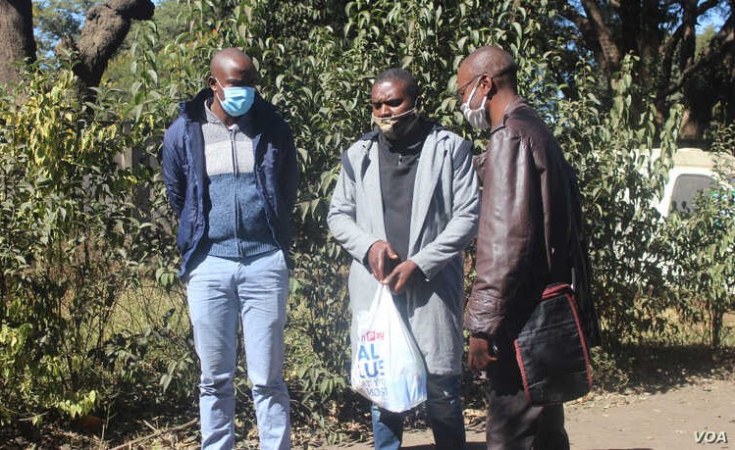 Columbus Mavhunga/VOA
Journalists Samuel Takawira and Frank Chikowore stand with a police detective outside a court in Harare, Zimbabwe, May 23, 2020.
New Zimbabwe (London)
By Anna Chibamu

Zimbabwe still has a long way to go in terms of conducting its operations based on the national constitution, some seven years after citizens adopted the supreme law of the land through an overwhelming 'Yes' vote in a 2013 referendum.

However, the milestone achievement has been blemished by increased human rights abuses and the militarisation of government operations by the ruling party - Zanu PF.

The sentiments were expressed by Zimbabwe Human Rights (NGO) Forum programmes coordinator, Musa Kika who told newzimbabwe.com there was need for President Emmerson Mnangagwa to respect and uphold the rule of law.

Kika said the seven-year-old Constitution had become merely a written paper as the so-called 'New Dispensation' had completely decided to craft its own laws outside what people voted for through various statutory instruments that were now over 300 since it came into office two years ago.

"It is such a shame that a Constitution that was adopted seven years ago at such a great expense, and over 95% of voters who participated voted yes for it, but it is being disregarded by the government," Kika.

"It is disheartening that at this date, we are talking about abductions, assault, torture and extrajudicial killings that are proscribed or prohibited by that Constitution.

"All these years have been long enough time to allow the government to have aligned various laws to the new Constitution but we are facing a lot of unconstitutional conducts," he said.

Kika said Zimbabwe had been shortchanged by the government as a lot still needed to be done to fully implement it as expected.

"We have not seen a lot of things in the Constitution being implemented. Such things as the devolution of powers but the government has already proposed a second amendment of the Constitution without aligning the laws it.

"This shows lack of commitment and lack of sincerity to abide by the social contract on the part of the government. So we have a long way to go," said Kika.

Abduction, Torture of Activists - Are Zimbabwe's Dark Days Back?