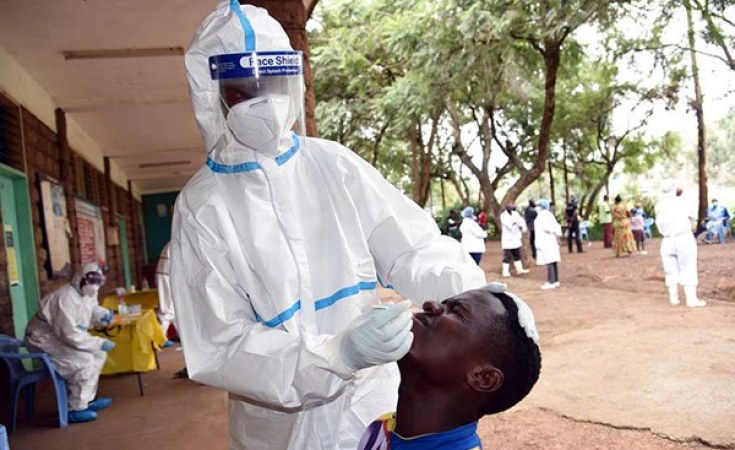 Evans Habil/Daily Nation
Testing for COVID-19 is carried out at St Teresa's Girls in Eastleigh in Nairobi.
The Nation (Nairobi)
By Angela Oketch and Bernadine Mutanu

The dusk-to-dawn curfew and containment measures put in place by the government to curb the spread of Covid-19 could soon be lifted once President Uhuru Kenyatta’s plan to reopen the country is actualised.

The   Nation   has learnt that following the President’s directive, committees charged with various aspects of the pandemic response started meeting on Sunday to come up with plans for reopening the country’s economic and social sectors.

The plan was top on the agenda of the National Emergency Response to Covid-19 Committee meeting, although details of the discussion were not available. The committee is chaired by Health Cabinet Secretary Mutahi Kagwe, with several Cabinet secretaries as members.

The overall response is led by the National Coordination Committee on the Response to the Coronavirus Pandemic, which is chaired by Interior Cabinet Secretary Fred Matiang’i.

The committees are expected to present their plans to the President in about a week, ahead of June 6 when containment measures are set to expire.

While addressing the nation on Saturday, President Kenyatta cited global trends and said Kenya would not remain under lockdown forever.

He was, however, quick to add that personal discipline in following the outlined safety measures would be required to reduce infections.

“We will not continue with the lockdown and the curfew. I have told health officials and my ministers that they should start telling Kenyans we cannot be under a curfew or lockdown forever,” he said.

He said current restrictions to prevent the spread of the virus have taken a toll on most businesses, with over 500,000   jobs lost   so far.

The Head of State, according to sources, seemed to have been encouraged by the country’s seemingly low death rate and the high numbers of infected people who do not have any symptoms.

By Saturday, the number of people who had died from the virus had remained at 50 for four days. But on Sunday, one more person was reported to have died.

“At the moment, our case fatality rate might seem high at about four per cent, but if we were to test more people, this ratio will come down,” said the source.

Transport minister James Macharia said the ministry would be looking at the aviation sector as a priority, with a view to get Kenya Airways up again.

“In line with global trends, we’re reviewing how this sector can reopen while at the same time complying with the fundamental health protocols in place,” he said Sunday.

Mr Macharia said Madaraka Express train service would also start operating once the restrictions on travel from Mombasa and Nairobi are lifted.

On the matatu sector, he said the safety measures, including social distance and use of sanitisers, will remain in force.

According to Health boss Kagwe, if everyone took personal responsibility in the fight against the pandemic, there would be no need for any containment measures, but this has not been the case.

Many Kenyans are not practising social distancing and most are not putting on masks correctly.

The government is, therefore, walking a tight rope. Will it open the economy with an indisciplined population?

How about concerns that cases will increase and that a new spike in infections will make the crisis last longer?

The reopening conundrum comes at a time when the number of infections is increasing and the government is expanding its mass target testing to different populations.

The Ministry of Health had earlier warned that the country should expect more infections as we wait for our peak in September.

Mr Kagwe gave an example of countries such as China and Italy that are up and running but only because residents are disciplined.

“Can you imagine a Kenyan taking herself/ himself to a quarantine centre for faulting the rules? For them, this is something that they practise willingly; they are taking individual responsibility,” he said.

In China for instance, for one to leave the house, aside from wearing a face mask, they must ensure their health pass reads green.

The health passes guide their daily life. The passes are linked to their mobile phone number, last name, passport number, and indicate either red or green, safe to leave the house or not.

If one reports an unusual temperature or had close contact with an infected person, then the pass shows red and the person cannot be allowed to leave their house. The government tracks them using the passes.

Before one enters a premises, the passes are checked. The red ones are denied entry. They are then taken to quarantine.

Citizens have been designated as wardens in their neighbourhoods, and are responsible for checking in on neighbours.

The government is carrying out target testing, and it will be hard to know where the country stands in the fight against the virus.

According to public health expert Patrick Oyaro, while other countries are opening up their economies, it is not yet opportune for Kenya to do the same.

“By opening the economy, the government is loosening stay at home orders yet Kenyans are very poor at following safety measures,” he said.

Dr Oyaro said the question that the government should be grappling with before making any move is whether the nation will adhere to the guidelines and if the government can minimise the damage.

Speaking to   Nation, Dr Mark Nanyingi, an infectious disease epidemiologist at the Institute of Global Health and Infection, University of Liverpool, says it will be foolhardy reopening when signs show the risk is rife.