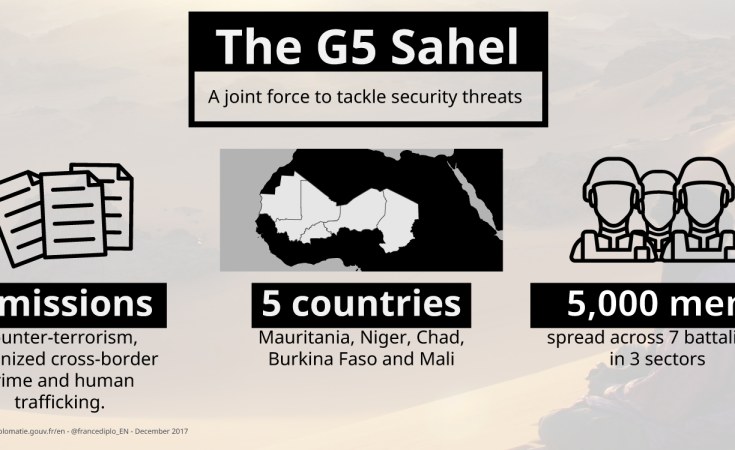 Nouakchott — The Sahel is caught in the grip of three major phenomena that threaten its bases: ambient insecurity with the corollary of the great humanitarian challenge to which the coronavirus has recently been grafted. The G5 Sahel countries have declared the coronavirus pandemic now the public enemy number 1. This group included, as of May 21, 2020, 3,366 patients declared positive with Covid 19, of which 2,125 who were cured and 224 deceased. Managing this triple battle requires pragmatism and imagination on the part of the national political authorities and their technical and financial partners.

The number one public enemy is rampant in all five countries, as shown in the table below.

Table drawn up from data supplied by Internet, section: Statistics for the coronavirus (COVID-19), updated in real time, minute by minute.

As of the same date, Africa as a whole had 91,000 confirmed cases of Covid 19 and 2,800 deaths from the disease, according to the African Union Center for Disease Prevention, based at its headquarters in Addis Ababa, Ethiopia. . More alarmist or more realistic, the World Health Organization (WHO) predicts that up to 236 million Africans could be infected by the pandemic in the first year, and up to 190,000 could die from it. That is a projection, in the form of modeling based on data from 47 African countries, representing one billion inhabitants.

Each G 5 member country has developed its Pandemic Response Plan, based on WHO recommendations. Containment measures and barrier gestures have also been adopted, variously followed by the populations. The figures in the table indicate that, the disaster predicted by both WHO and other voices has not yet taken place.

But, if the continent seems to be on the right track to avoid a shipwreck, the economic devastation is already perceptible. The temporary cessation of many activities has deprived states of considerable customs and tax revenues. At the same time, they had to finance accompanying measures. Thus, Mali has released 500 billion FCA for that purpose. A purpose that includes among others: medical expenses for the detection and the caring for people victims of the pandemic, the distribution of food to the vulnerable families, the backing of businesses so that they do not dismiss workers, the sending of planes, by special flights, in order to repatriate compatriots stranded outside the borders, etc.

The full cost of the pandemic is not yet known in the G5 Sahel. In addition, the NGO OXFAM (French section) estimates that in West Africa, 33 million new people could be at risk of hunger because of the Covid 19.

It is under this cloud-laden sky that the G 5 Sahel Foreign Ministers conferred by videoconference on April 15, 2020, under the chairmanship of their Mauritanian counterpart. They, in particular, welcomed the assistance of China, the African Union and the European Union. The opportunity also to launch « an urgent appeal to all partners for an even greater solidarity and a strong mobilization in favor of the G5 Sahel countries, to bring them emergency aid in equipment, materials and medicines which they greatly lack  » As a response to this request, the European Union has decided to organize humanitarian flights to two of the G5 member states: Burkina Faso and Niger. On board of these flights were workers and equipment necessary for the response to the pandemic.

Lack of a shared vision.

The G5 countries continue to face terrorist attacks in the three-border area, Burkina Faso, Mali and Niger, as well as in the Lake Chad Basin (Niger, Nigeria and Chad). Only Mauritania still escapes. On March 23, Chad was bruised by the Boko Haram sect attack on its base in Boma, an island in Lake Chad, which claimed the lives of 98 soldiers. In response, the Chadian president, Idriss Débi Itno, led a counter-offensive, known as « Boma’s anger ». A full scale battle, which has for the moment made it possible to cleanse the Chadian departments of Fouli and Kaya, located on the border with Niger and Nigeria, as well as areas in Nigerian and Nigerian territories, of elements of Boko Haram.

Paradoxically, this impressive battle of the Chadian army also revealed the absence of a shared vision between the different countries engaged in this fight. The Chadian president complained that his country alone bore the brunt of the war against Boko Haram. In his opinion, the Nigerians, during this operation, were to take over from the Chadians on Lake Chad, and the Nigeriens, to fight on their eastern and western fronts. His bitterness seems to have been understood by the other protagonists, since the G 5 Sahel ministers « welcomed the action of the Chadian Armed Forces under the direct command of their supreme leader, His Excellency, Mr. Idriss Deby Itno, and committed the countries neighbors to coordinate their actions in order to eradicate the hydra of Boko-Haram”. The exercise of building a shared vision is now an imperative.

The attacks continue to fuel the numbers of IDPs and refugees, compounding the humanitarian problem. The Burkina Faso Prime Minister recently indicated that his country has spent nearly 4 billion FCA in 2019 for the needs of the Internally Displaced Persons.

To get out of this situation, the Sahel countries hope, among other things, the cancellation of their external debts. In this, they received support from France, the International Monetary Fund, the World Bank and the United Nations. Specifically, the UN Secretary-General Antonio Gutteres called for « a global ceasefire » and also the postponement or cancellation of the $ 236 billion owed by these countries.

The umbrella to fight hunger could be the strengthening of the Inter-State Committee to Combat Drought in the Sahel (CILSS), based in Ouagadougou, Burkina Faso. Created in 1973 during the first drought in the Sahel region, CILSS combat for food security.

On the debt issue, we also are witnessing the G5 Sahel countries going to negotiations in dispersed ranks. Indeed, Mali signed a moratorium with the Paris Club (lending countries), after the decision of the G20 (the 20 richest countries, 90% of the wealth of the planet) to suspend, this year, its debt service. It has become the first African country, among the 41 eligible, to do so. Did you say shared vision?

Deadly Attack On Military Base in Diffa Region

Previous Story
Tagged:
Copyright © 2020 Centre for Strategies and Security for the Sahel Sahara. All rights reserved. Distributed by AllAfrica Global Media (allAfrica.com). To contact the copyright holder directly for corrections — or for permission to republish or make other authorized use of this material, click here.