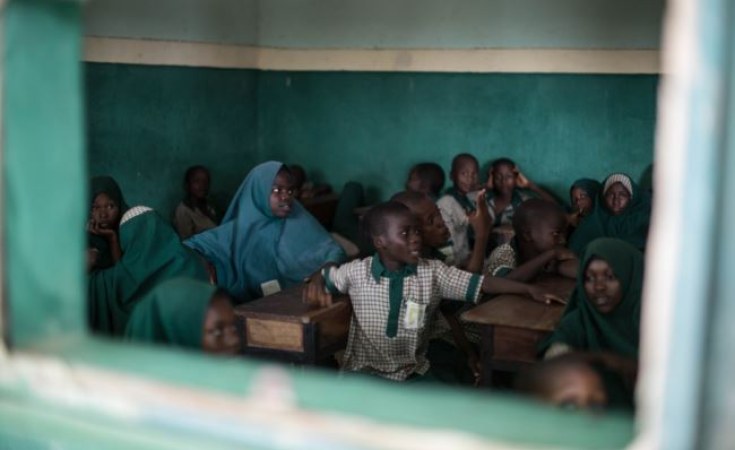 Human rights groups say children in conflict regions aren't receiving enough support. Children who have escaped from Boko Haram are treated with suspicion in Nigeria, while schools are closing in Burkina Faso.

A generation of children in West Africa risk missing out on vital education and health care amid ongoing conflicts in the region, human rights organizations warn.

A new report released by Amnesty International on Wednesday detailed failure on the part of Nigerian authorities to protect and provide education to children in the country's northeast, which has been devastated by more than a decade of conflict between the Nigerian government and the Boko Haram armed insurgency.

Another report released by Human Rights Watch on Tuesday found an increase in Islamist extremist attacks in Burkina Faso since 2017 has had a horrific impact on children's education. Armed groups aligned with al-Qaida and the so-called Islamic State have repeatedly attacked teachers and schools in the country in opposition to Western-style education and government institutions, the report said.

Similarly, extremist-driven violence is rife in Mali and Niger, where schools are also being forced to close, leaving children without access to support and making them more vulnerable to recruitment by extremist groups.

"The past decade of bitter conflict between Nigeria's military and Boko Haram has been an assault on childhood itself in Northeast Nigeria," said Joanne Mariner, Amnesty International's Acting Director of Crisis Response, in a press release.

"The Nigerian military's treatment of those who escape such brutality has also been appalling."

The Nigerian military has been repeatedly accused by diverse rights groups of holding thousands of children in squalid conditions for years. In Amnesty's latest report, interviewees described being held in inhumane conditions while being subject to beatings, torture and sexual abuse by adult inmates. The vast majority of the children are never charged with a crime.

Nigerian authorities have consistently denied any allegations of mistreatment.

"The state government has been on top of the situation in ensuring that the [Boko Harm] insurgency does not destroy the dreams and aspirations of [these] children by providing adequate educational facilities, vocational training centers and free education centers to give them equal opportunities," Hajiya Zuwaira Gambo, the Borno State Commissioner of Women Affairs and Social Development, told DW.

Despite the trauma they have faced, many children who have escaped or been rescued from Boko Haram are treated with suspicion, with some classified as 'combatants' and transferred to military detention facilities, according to the report.

Former child soldier, 12-year-old Idris Muhammad, told DW how he and other boys were trained for potential combat by the extremist group.

"We were abducted form our village and they took us to their base in Sambisa Forest," he said. "Whenever they went to the battle field they normally carried us along. They taught us what they did on the battleground and they even killed people in front of us."

While the majority of girls are kidnapped to be used as brides for the fighters, 13-year-old Maryam Umar Kirawa says she and other girls were still trained to fight if necessary.

"They taught us how to kill a person with a knife, or a gun with bullets," she told DW. "They also taught us their own type of religion. In fact, they told us they were going to teach us all the methods of war before we escaped."

Zariyatu Abubakar, a children's rights activist in northeastern Nigeria, says returnee children should be given more protection and support by authorities.

"They are only children, so somebody has to take responsibility to support them, educate them, feed them and provide shelter for them," she told DW. "We need to place these children into homes to that they will feel secure and protected."

UNICEF official Geoffrey Ijumba says the children need to be viewed first-and-foremost as victims if they are to be properly rehabilitated.

"We need to make sure they are integrated [back into society] because this is the only way they will rediscover their dreams and be able to contribute positively to their own personal development and to the development of [Nigeria]," he told DW.

Since the emergence of the Burkinabe Islamist group, Ansar ul Islam in 2016, violence has steadily increased, primarily in the country's northern and eastern regions, according to report by the organization entitled 'Their War Against Education': Armed Group Attacks on Teachers, Students, and Schools in Burkina Faso.

The extremist groups have abducted and killed education professionals, including teachers, and damaged or destroyed existing schools, the report says.

"Armed Islamist groups targeting teachers, students and schools in Burkina Faso are not only committing war crimes, but are undoing years of progress in improving children's access to education," said HRW's children's rights researcher, Lauren Seibert, in a press release.

"The Burkinabe government should investigate these attacks, ensure children regain access to schooling and provide needed support to education workers who experienced attacks."

While some positive steps have been taken, such as reopening some schools and expanding distance-learning programs alongside its COVID-19 response, observers say the traumatic impact of the attacks will be compounded if the conflict continues.

"Armed Islamist groups have cost teachers their lives, livelihoods and physical and mental health, and they are costing hundreds of thousands of children their futures," said Seibert. "These attacks need to stop."

Children without access to education or social services are also at higher risk of being recruited by extremist groups, perpetuating the cycle even further.

Ongoing attacks by Islamist extremists in the Sahel region have also spilled over into Mali and Niger. UNICIEF says over 8 million children have been forced out of school.

Once considered a buffer zone against violence in neighboring Nigeria and Libya, the tri-border region, which includes Burkina Faso, has devolved into a hotbed of conflict, despite international military support.

According to UNICEF, the crisis in the Lake Chad region has forced over 3 million people to flee their homes.

Mohammad Al-Amin contributed to this article.