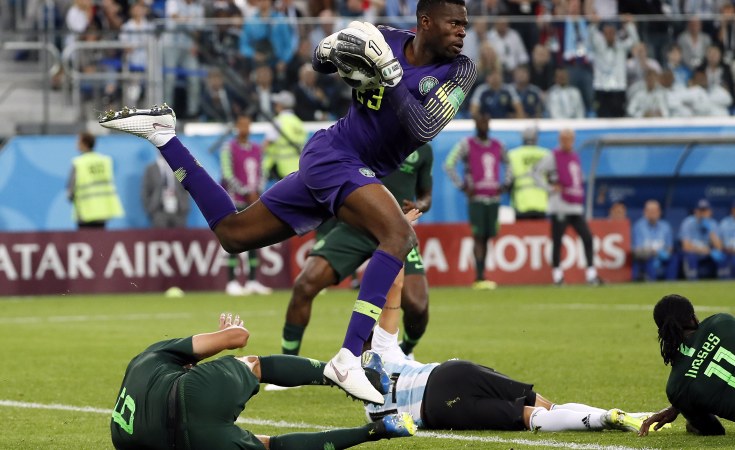 Etienne Laurent/EPA/BackpagePix
Francis Uzoho in action as Nigeria's goalkeeper in the Super Eagles' match against Argentina at the 2018 FIFA World Cup.
This Day (Lagos)
By Duro Ikhazuagbe

President of the Nigeria Football Federation (NFF), Amaju Pinnick, has finally put to rest speculations about the future of German Gernot Rohr with Nigeria's senior national team, the Super Eagles.

Pinnick confirmed yesterday that the contract of the Super Eagles Head Coach due to end June 30 has been extended by another two and a half years.

The confirmation has also put to rest speculations in a section of the local sporting media that former Portsmouth and Tottenham Manager, Harry Redknapp, 73, was been considered to replace Rohr.

"I am happy to announce that the NFF and Coach Gernot Rohr have concluded all contractual discussions and he will stay on as the coach of the Super Eagles", Pinnick said in a statement on Twitter on Wednesday.

"We can now look forward to qualifying for the World Cup (2022) and winning the Nations Cup (AFCON 2021). These are sacrosanct and Coach Rohr is aware of these conditions," Pinnick added.

However, the NFF President earlier told BBC Sport Africa: "We (NFF) do not know anything about Redknapp being appointed as Super Eagles coach."

Rohr's former contract was set to expire in June 2020, and while he was presented a new deal at the start of April, there were uncertainties about an agreement based on new clauses set by the NFF.

Some of the conditions in the new contract offered Rohr include; accept to be paid equivalent of his month salary in the Nigerian currency, Naira; He is to stay most part of his contract in Nigeria and be part of the process of monitoring the domestic league with the prospect of discovering new talents for the senior national team, amongst other things.

Although Pinnick did not state some of the concessions in the new contract waived before Rohr agreed to sign the documents, both parties appear happy.

In the last 24 hours, there was increased speculation about the possibility of Redknapp stepping into the most coveted job in Nigerian sports circle.

New Dates Set for 2021 AFCON and 2022 World Cup Qualifiers
Tagged:
Copyright © 2020 This Day. All rights reserved. Distributed by AllAfrica Global Media (allAfrica.com). To contact the copyright holder directly for corrections — or for permission to republish or make other authorized use of this material, click here.