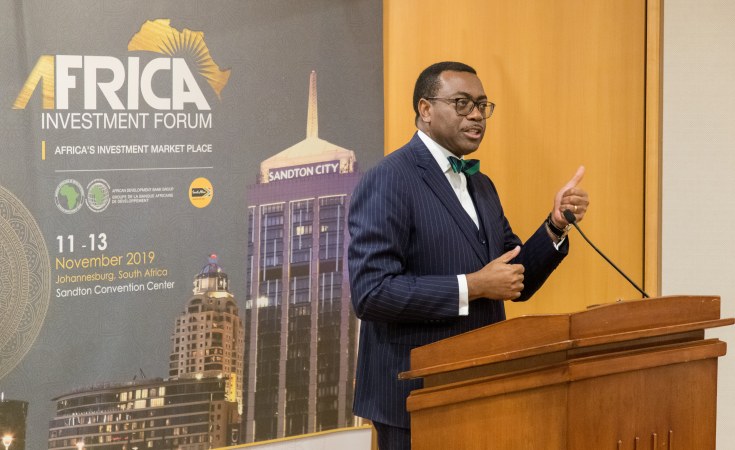 The President of the African Development Bank (AfDB), Akinwumi Adesina, has maintained that he is innocent of all allegations of fraud leveled against him.

Mr Adesina made this known in a statement he personally signed, dated May 27.

The former Nigerian minister of agriculture has been in the eye of the storm in recent weeks, amid allegations of fraud, preferential treatment and sundry acts of impropriety, among others.

On May 5, the ethics committee of the continental bank, headed by Takuji Yano, said in its report that Mr Adesina was not guilty on all counts.

Mr Yano is a Japanese executive director charged with the responsibility of investigating allegations by some concerned employees against the official.

The committee described the allegations that he (Mr Adesina) violated the code of conduct of the institution as "spurious and unfounded".

In his press statement Wednesday, Mr Adesina said there are attempts to tarnish his image and that of the bank.

"In spite of unprecedented attempts by some to tarnish my reputation and prejudice the Bank's governance procedure," he said, "I maintain my innocence with regards to trumped up allegations that unjustly seek to impugn my honor and integrity, as well as the reputation of the African Development Bank.

"I sincerely appreciate the support of the Bank's shareholders."

In a petition by a group of whistleblowers, Mr Adesina was accused of 20 breaches of the bank's code of conduct, including "unethical conduct, private gain, an impediment to efficiency, preferential treatment, and involvement in political activities."

The group, which noted their allegations were in line with AfDB's whistle-blowing policy, said these activities adversely affected the confidence and integrity of the bank.

The bank, however, found the allegations to be "frivolous."

Regardless, the United States government expressed "deep reservations about the integrity of the committee's process" and called for a fresh "in-depth investigation of the allegations."

In a letter dated May 22, 2020 to Ms Kaba, the U.S. government, through the Secretary, Department of Treasury in Washington, D.C., Steven Mnuchin, faulted the decision of the committee to totally exonerate Mr Adesina of all allegations, saying it was not yet time to make such a declaration.

A Bloomberg report Wednesday claimed that the bank's board may have agreed to an independent probe of Mr Adesina, after the U.S. rejected the internal investigation.

Quoting two people familiar with deliberations on the matter, the report said "Africa's largest multilateral lender decided on the inquiry after several governments backed U.S. Treasury Secretary's criticism of a bank-led examination into the allegations.

It added that Mr Adesina may have to step back from the role until the probe is completed.

But Mr Adesina in his statement Wednesday said that he believes a just, transparent and fair process would prove his innocence.

"I am confident that fair, transparent and just processes that respect the rules, procedures and governance systems of the Bank, and the rule of law, will ultimately prove that I have not violated the Code of Ethics of this extraordinary institution," he said.

He also promised to work with other stakeholders of the bank in its drive to fulfil the mandate of transforming and accelerating Africa's development.

Press Statement on the Crisis of the Africa Development Bank (AfDB)