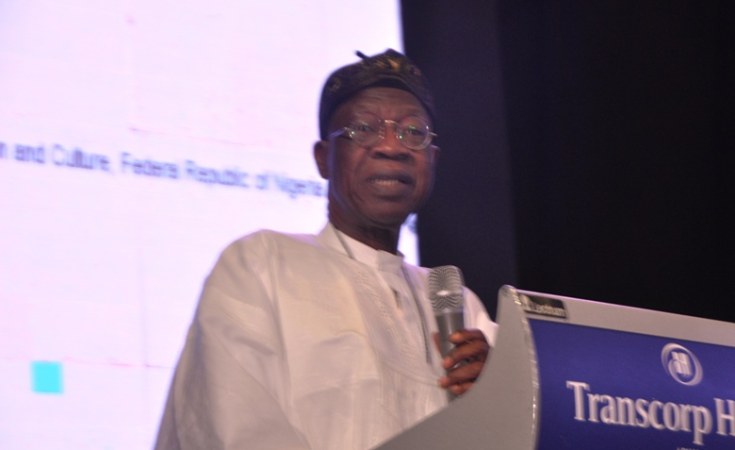 Human rights groups have kicked against the arrest and detention of a broadcast journalist, Rotimi Jolayemi, over a poetry work deemed critical of the Minister of Information, Lai Mohammed.

This newspaper learnt that prior to his arrest, the police had earlier detained Mr Jolayemi's wife, Dorcas Jolayemi, for eight days in a bid to get at him.

In an interview with Punch, Mrs Jolayemi said Mr Joseph was accused of possessing a stolen cell phone.

"However, on getting to the SCID, he was interrogated. The police asked him questions about my husband. They subsequently played a phone conversation he had with my husband. It was obvious that his phone had also been bugged. My brother's older brother, John Jolayemi, was also arrested," she was quoted by punch.

However, Mr Jolayemi presented himself at the State Criminal Investigation Department of the Kwara State police Command on May 5 and was transfered to Abuja on May 7.

According to a document obtained by PREMIUM TIMES, the police filed a one-count charge marked FHC/ABJ/CR/104/2020 against the journalist on May 22, 16 days after he was detained.

The offence, according to the police, was contrary to section 24(1)(b) of the Cybercrime (Prohibition, Prevention etc) Act 2015.

"That your Jolayemi Oba Akewi 'm' aged 43 years on or about the 14 day of April, 2020 at Osolo Compound Ekan Nla, Kwara State within the Jurisdiction of this honourable Court did send audio message through your android phone device to a group whatsapp platform known as

"Ekan Sons and daughters" and which went viral Immediately after it was posted for the purpose of causing annoyance, insult, hatred and it (ill) will to the current Hon. Minister of Information and Culture, Federal Republic of Nigeria, Alhaji Lai Mohammed and thereby committed an offence contrary to section 24(1)(b) of the Cybercrimes (Prohibition, Prevention etc) Act 2015," the charge sheet read.

It was not immediately clear if the minister influenced his arrest and detention.

Meanwhile, several rights activists and groups have called for the release of Mr Jolayemi.

The Human Rights Writers Association of Nigeria (HURIWA), Amnesty International and the Committee for the Defence of Human Rights have issued statements condemning the development and demanding that the journalist be freed.

HURIWA, in a statement signed the National Coordinator, Emmanuel Onwubiko, and the National Media Affairs Director, Zainab Yusuf, called on the President Muhammadu Buhari-led administration to take immediate action to stem the rising "tide of horrendous violations of the freedoms of expression and information."

"... to stop the rapidly shrinking democratic spaces for the media to practice their profession in line with section 22 of the Nigerian Constitution which mandates the media to monitor the operations of all governmental and non-governmental systems in the country and to serve as the national vanguard and conscience.

"HURIWA hereby calls on President Muhammadu Buhari-led administration to order the immediate arrest of the minister of information and culture, Lai Mohammed and the Kwara State Commissioner of Police for reportedly whisking away innocent persons and detaining them only because their brother was alleged to have read a poem considered offensive by the minister."

Also, CDHR, in a statement by its national president, Osagie Obayuwana, said the harassment of Mr Jolayemi and his relatives by security operatives is worrisome.

"It is worrisome that Alhaji Lai Mohammed would have a hand in the arrest of the wife of Mr Jolayemi, Mrs Dorcas Jolayemi, and two of his brothers who were kept in detention for eight days, nine days and two days respectively as hostages, while the journalist, Mr Rotimi Jolayemi, was being sought."

"Jolayemi - a journalist was unlawfully arrested on May 6 over a poem considered critical of Minister of Information; Lai Mohammed. His wife too was unlawfully detained for 8-days in squalid condition. We are calling on authorities to immediately release him," the group wrote on Twitter.

Nevertheless, Mr Mohammed refused to respond to enquiries sent by PREMIUM TIMES via SMS on Wednesday. Also, the telephone calls put across were not answered.

PREMIUM TIMES reported how the Nigerian press suffered the 'worst' attacks under the Buhari government in the last 34 years.

While attacks on Nigerian journalists is no longer a new phenomenon, they appear to have taken a turn for concern in recent months.

An analysis by www.pressattack.ng, published by the Coalition for Whistleblowers Protection and Press Freedom, shows that over 403 total cases of attacks and harassments on journalists have been recorded from 1985 till date.

Also, since its adoption, Nigeria's 2015 cybercrime act has been repeatedly used against journalists for their reporting, a report from the Coalition for Protection of Journalist (CPJ) read.