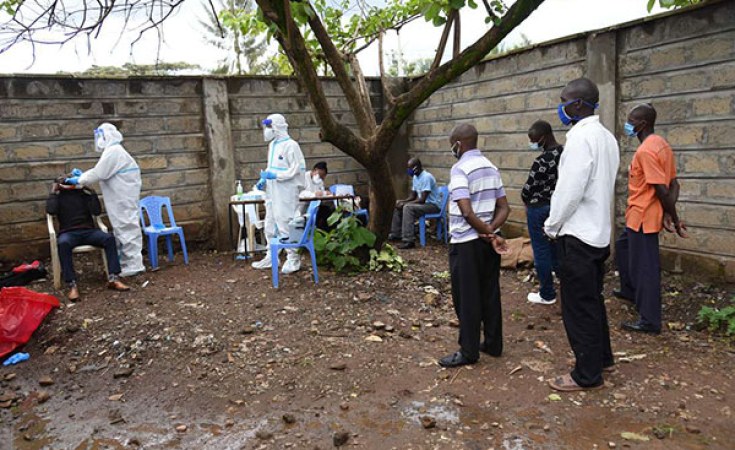 Coronavirus scare has hit City Hall after officers at the procurement department were sent home after one of them tested positive for Covid-19.

This comes after a lady working at the county government's procurement department returned a positive result for the deadly Covid-19.

The lady was tested last week last on Thursday before her results were confirmed on Tuesday.

Subsequently, City Hall staff have now been ordered to test for the novel coronavirus as contact tracing for the lady is ongoing.

Nairobi County Health Executive Hitan Majevdia confirmed the case saying that the lady's test results returned positive before they were informed on Tuesday and already she has been isolated.

Mr Majevdia said that as a result of the positive case, all the four staff who had been working with the lady have been taken for testing and they will be isolated for 14 days.

"Yes, there is a case who was discovered when we were carrying out the mass testing but we have already isolated her together with her close contacts and taken all the necessary precautions. The good part is that she is not that outgoing person but reserved who only spent most of the time at her office," said Mr Majevdia.

He further said that another test will be administered on the officers to confirm that they are completely alright from Covid-19 before they are allowed back to office.

The CEC added that they have embarked on contact tracing of all those who might have come into contact with the said lady as well as ordering for all staff at City Hall to go for the free mass testing.

"We are currently doing contact tracing of all those who might have come into contact with her as well as ordering for testing of everyone at City Hall. Being a public office you never know as one person can meet even over 100 others," he said.

Nairobi County has been the epicenter of Covid-19 with at least 650 confirmed cases countrywide.

According to one of the officers at the department, who did not want his name revealed as he is not authorised to talk to the media, said that the lady had been working with four of her colleagues at the procurement department before going for the ongoing Covid-19 mass testing being carried out by Nairobi Metropolitan Service (NMS) last week.

Her test results came back positive and the county government was informed of the outcome on Tuesday.

This led to the sending home and ordering for testing of all the 10 officers who usually work at the procurement department before quarantining themselves for 14 days.

The office at City Hall has also been fumigated by the county government's public health officials after the case was reported.

"She has been working and even passed by the office on Tuesday last week. After it was confirmed that she was positive and brought to our attention yesterday (Tuesday), all those who have been having close contact with her were told to go for self-quarantine," said the officer.

Learning Continues From Homes as COVID-19 Paralyses Schools
Tagged:
Copyright © 2020 Nairobi News. All rights reserved. Distributed by AllAfrica Global Media (allAfrica.com). To contact the copyright holder directly for corrections — or for permission to republish or make other authorized use of this material, click here.