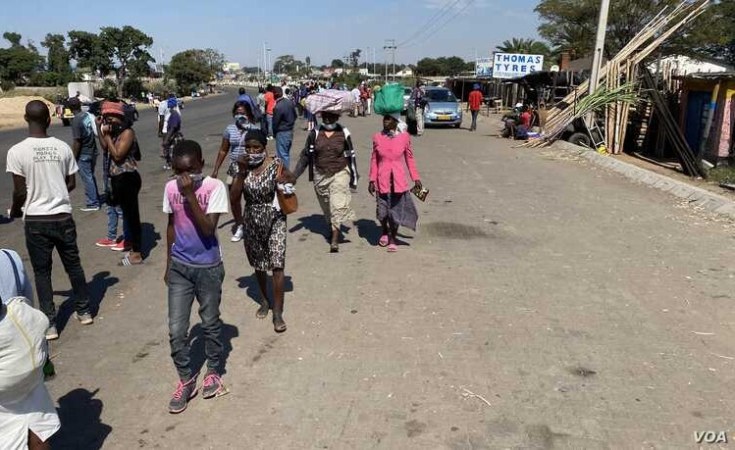 Columbus Mavhunga/VOA
It was back to normal in Harare, Zimbabwe, for most informal traders despite a lockdown called by the government last month to contain the spread of the coronavirus, May 15, 2020.
New Zimbabwe (London)

The Zimbabwe Congress of Trade Unions (ZCTU) has warned government to stop using the Covid-19 outbreak to justify its clampdown on critics and journalists.

This follows the alleged abduction and torture on three MDC Alliance activists by suspected state security agents who were accusing the female politicians of staging a street protest against government failure to deal with massive desperation occasioned by its lockdown measures.

Lately, private media journalists Frank Chikowore and Samuel Takawira were arrested and locked for four nights for allegedly violating lockdown regulations through interviews they were conducting with the three hospitalised.

The State alleges that the scribes entered the hospital without permission and failed to maintain social distancing as required by the law.

Thousands more citizens have been arrested over similar offences.

Commenting on the arrest of journalists, ZCTU secretary-general Japhet Moyo said authorities were using Covid-19 to smokescreen their high-handed abuses on citizens.

"The Zimbabwe Congress of Trade Union notes with concern that the government is using the outbreak of Covid-19 as scapegoat to arrest journalists going about their business and this should stop," Moyo said.

"It is unfortunate that the outbreak is now being used to curtail people's rights."

Moyo added, "Journalists must be left to do their work without hindrance as they have an important role to inform the nation."

The trade union chief said while the labour group did not condone any unlawful acts among citizens, it remained apparent the state was taking advantage of the situation to deal with critics.

"If we do not protect these rights, they (rights) may be gone post-COVID-19.

"We need to guard jealously our Freedom of Assembly and Association and Freedom of Expression," Moyo said.

At a time the country faced a challenging health crisis, Moyo said there was need to balance the right to information.

The secretary-general said it is important that Zimbabweans forge a united front to defend their rights as no one was safe from state-sponsored abuses.

"We need to forge a united front to defend our rights as no one is safe from this abuse and repression."

Mliswa Urges Matanga Sacking for Failing to Deal With Abductions