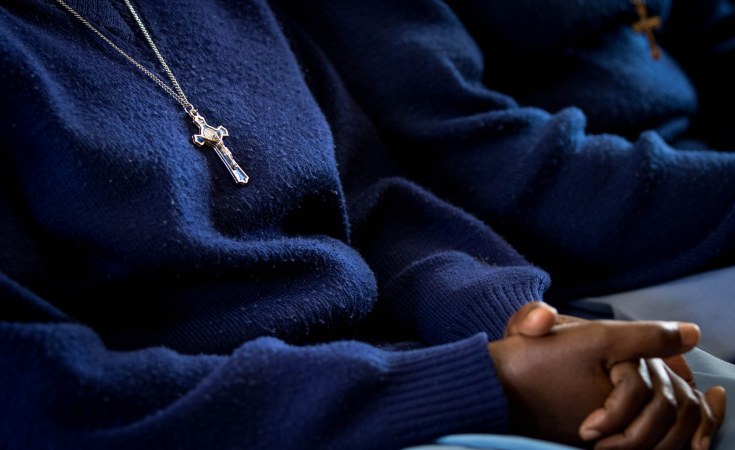 That’s the new word from the man at the top, South African president Cyril Ramaphosa, announcing that houses of worship will now be allowed to hold in-person services -- with certain restrictions to guard against COVID-19.

The announcement softens the government’s hard stance prohibiting all religious gatherings, which medical experts identified as high-risk for transmission of the virus.

But Ramaphosa said that in the end, faith trumped those concerns.

“As a nation, we have a responsibility to respond to this aspect of the pandemic with as much effort and urgency as we have responded to the health crisis, and as we have acted to relieve the economic and social effects on our people,” he said. “We have a responsibility to also take care of the spiritual, psychological and emotional well-being of all South Africans.”

Under the new regulations, houses of worship must keep facilities clean and sanitized, limit congregations to fewer than 50 people and require participants to wear face masks and maintain social distancing protocols.

Bishop Malusi Mpumlwana, general secretary of the influential South African Council of Churches, told VOA that the group’s member churches themselves came up with the new guidelines, which gives him confidence that they can follow them. He said heads of member churches meet weekly -- online -- to discuss their anti-virus strategy, and want to include other faiths in these discussions.

He stressed that for millions of lower-income South Africans, who don’t have the means to watch virtual services, the physical church is a lifeline.

“For several months, including times of major festivals in their churches or even in their mosques and synagogues, they've been unable to get in touch with their spirituality because there's a total shutdown,” he said. “It is not appropriate to say that they can only be able to do that next year, when we get to level one. But it says to me is that we need to now look at how differently to be church in COVID times, because COVID is not going away.”

Some worry about risks

Fortunately, he said, churches are familiar with the challenges posed by plagues. To that end, the council plans to widen churches’ range of social services, including academic support for students who have suffered from school closures.

But not everyone believes this is a good idea.

Rick Raubenheimer is president of the South African Secular Society, a group of atheists, skeptics and agnostics that, since the pandemic began, has met only virtually. They do not plan to resume actual meetings, although technically, he told VOA, they could argue that they qualify under the new rules.

“We think it's a bad idea, from several points of view,” he said. “Firstly, the president has to date largely followed the science, and the science says that you need to practice social distancing, not have large gatherings, take precautions against transmission and so on. And a lot of these would be very problematic in religious gatherings, which is why the prohibition on religious gatherings, just like any other recreational gathering, has been a good idea to date. He is now making an exception for a particular community, so he is in fact going against the constitution which says that there shall be no discrimination on the basis of religion or belief.”

A legal outcry seems unlikely, as 80 percent of South Africans identify as Christian. Mpumlwana said houses of worship now have to take the lead in showing how to live -- and thrive -- amid the virus.

Ramaphosa has declared Sunday a national day of prayer across the Rainbow Nation. More than 520 South Africans have died of the virus since March.

Dealing With Mental Health in the Time of COVID-19 Pandemic
Tagged:
Copyright © 2020 Voice of America. All rights reserved. Distributed by AllAfrica Global Media (allAfrica.com). To contact the copyright holder directly for corrections — or for permission to republish or make other authorized use of this material, click here.