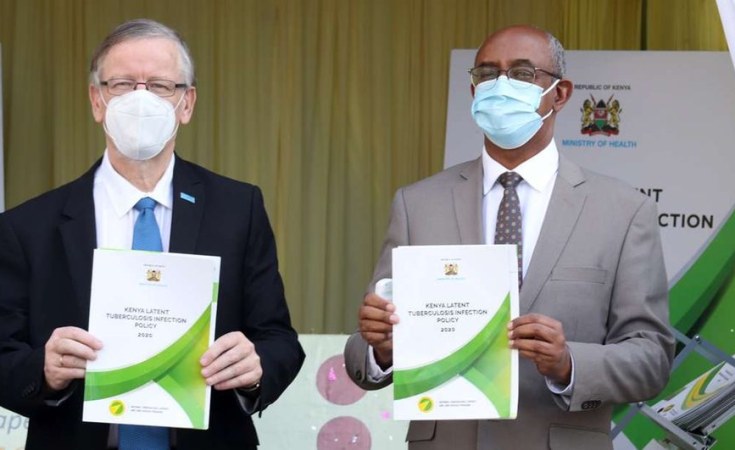 Report shows about 41,000 more people are estimated to develop killer disease between now and 2025 in Kenya.

The Covid-19 pandemic is silently birthing another crisis. As countries focus their efforts on containing coronavirus, a storm is brewing that could hurt the world's war against killer tuberculosis.

For decades, major drives have been put up to eradicate the disease and progress has been made despite antibiotic resistance. And now this global fight could be set back years five to eight years.

So bad is the situation that a new report has shown about 41,000 more people are estimated to develop TB between now and 2025 in Kenya as Covid-19 hampers diagnosis and stops people from seeking healthcare. A total of 15,800 more people are also expected to die, the study has shown.

"Each month taken to return to normal TB services would incur an additional 1,157 deaths in Kenya between 2020 and 2025," says a statement sent to HealthyNation.

Lucica Ditiu, Executive Director of the Stop TB Partnership, says the countries were chosen due to the high numbers of TB they report. The research projected the estimates in a scenario that there would be a two to three-month lockdown, and a probability that it would take at most 10 months for the services to be restored.

Dr Nimalan Arinaminpathy, associate professor of mathematical epidemiology at Imperial College London and one of the leads in the study, says: "We are looking at an overall global incidence of levels that we last saw in 2013, and so, effectively, this is an eight-year set back in the progress we had made."

These numbers came to light even as Health Cabinet Secretary Mutahi Kagwe expressed concern that fewer people were visiting hospitals for fear of contracting coronavirus.

Lockdowns meant to protect people from Covid-19 have now turned against patients and TB treatment seems to be suffering the greatest assault.

TB is a preventable disease and despite this, it still kills 1.5 million people per year worldwide, making it the top infectious disease killer. Even more concerning is that there are people with latent TB, which has no symptoms. Latent TB can, however, be triggered into active TB, which is then contagious.

Dr Arinaminpathy said the measures put in place to curb the spread of Covid-19 such as lockdowns and social distancing are public health interventions for a disease without a vaccine or a cure. However, these have interfered with Kenya's TB strategy for 2019 to 2023 on early prevention, diagnosis and treatment.

Diversion of resources to Covid-19 has also left TB patients exposed to inadequate care. In March, the Health ministry announced that it would repurpose the GeneXpert machines used for point of care testing for TB to test for Covid-19. The research by Dr Arinaminpathy and his colleagues showed the reassignment of the machines to Covid-19 would reduce the chances of TB diagnosis by a whopping 70 per cent.

As countries struggle to deal with the pandemic, they have assigned their best teams to Covid-19 patients, dealing TB treatment another blow. If nothing is done to fix this in future, healthcare workers will not be available to monitor TB patients, ensuring they finish their first and second-line treatment. This omission, the report shows, would reduce completion of the medication to 48 per cent.

And it is more bad news for TB patients as the restriction of movements occasioned by the Covid-19 pandemic, could lead to stock-outs of their crucial drugs.

Mary Nzamalu, a clinician in charge of TB in Nairobi's Starehe sub-county tells HealthyNation public hospitals are trying their best to keep patients on medication and ensure they do not miss clinics. She, however, expresses fears about the diagnosis of new cases.

In the Rhodes Health Facility, one of the 14 she is in charge of, the number of people walking into the clinic to be diagnosed because they suspect they have TB, has reduced drastically from 525 in February to 135 in April.

"That means we are not going to find the new cases and put them on treatment," she says.

Nzamalu says they have also experienced cases where patients fail to show up when they are referred to the lab for TB tests. TB shares some symptoms with Covid-19 such as cough. Because of this, those who have TB also face stigma. "Patients fear that when you cough, you will also be tested for Covid-19 and then isolated," says Nzamalu.

Job Okemwa, the Turkana County TB coordinator, also foresees a problem. He expresses fears that due to the similarities between TB and Covid-19 symptoms, many people will avoid seeking care from hospitals should they experience any of those symptoms.

Already, finding new TB cases in order to put them on treatment was a problem in the country even before the virus struck. According to Kenya's TB programme at the Health ministry, there were about 156,000 people with the disease in the country, but nearly half of all estimated cases were not diagnosed, notified and/or treated in 2018.

TB is an airborne bacterial disease that is the fifth killer in Kenya. A 2016 prevalence survey, the second after the first in 1957, revealed the burden of TB in Kenya was 426 cases per 100,000 population. The Health ministry had said then that this was more than twice as many TB cases as previously estimated.

Dr Ditiu said that this is a public health concern because of the snowballing effect: one person infects 15 others, and each of those also infects others.

The interruption of health services in Kenya also affects HIV care, another virus that drives the TB epidemic. Nearly 33 per cent of those with HIV develop TB due to their compromised immunities. And those whose immunity is compromised are considered to be at the highest risk of severe Covid-19 infection.

The greatest concern has been how this will affect those in slums. "Maintaining physical distance in Kibra is almost impossible. People live in tiny, overcrowded homes with few windows or other ventilation. These conditions, as well as making it easy for a disease like Covid-19 to spread, making it very difficult for people to stay inside for long periods of time," Lili-Marie Wangari, the preparedness coordinator for MSF Kenya, wrote on the organisation's website.

However, in some health circles the virus is being seen as a likely blessing in disguise to the TB community. But, public health experts say it will be too early to tell if this will hold. Dr Patrick Oyaro, a public health expert who focuses on HIV, says the fewer crowds as a result of Covid-19 have reduced the likelihood of people being infected with TB. "There are not many people in vehicles, it is now mandatory to wear masks, people are not in restaurants or clubs, so somehow the places that increase the chances of being infected have reduced," he says.

He says now more than ever the focus should not be shifted from TB because the repercussions will be felt many years after the coronavirus pandemic is over.

In January, Thomas Oduor got diagnosed with drug-resistant TB, the type that does not respond to the first-line treatment and takes an extra six months to cure. He is one of the about 700 people in Kenya who have this type of TB.

He tells HealthyNation when a Health ministry official gave him a mask to prevent people from contracting TB, he stood out like a sore thumb. "That is not the case any more because we now all have to wear masks," he says.

Because he suffers from a more severe TB, Oduor has to be on oral medication for a year, and he has to attend clinic daily to take the drugs. Clinician Nzamalu, who looks after Oduor, says this daily routine is the hardest part of curing TB and is where they lose many patients. The medication is often a combination of antibiotics that cause fever, lack of appetite, nausea and rashes.

Only 30 per cent of patients with drug-resistant TB completed their treatment in 2016 (no other analysis has been made public since then), according to the Health ministry. Another 19 per cent of the patients often succumb to the disease.

But not all is lost. Health workers have had to become aggressive in their methods to persuade patients to go to the hospital. "The language has to be really compassionate now more than ever. I repeat the same thing again and again until some times the patients are the ones who remind me of their timelines. Health education is key in this journey," says Nzamalu.

Oduor says whenever he fails to find Nzamalu in the clinic, she calls him in the evening to find out whether he was given his daily Sh200 fare, a drink at the hospital and what his feelings were about the care he was given that day. The 14 facilities Nzamalu oversees also offer porridge to street children to encourage them to seek medical care.

Technology has also been employed to ensure patients remain on course until they complete treatment. A phone programme dubbed Keheala and created by the company Keheala sends messages to patients daily to remind them to take their pills.

A study published in the New England Journal of Medicine in September 2019 showed that patients enrolled in the phone programme experienced 68 per cent fewer bad outcomes such as death, treatment failure or loss of contact with the clinic as compared to those who were not.

Keheala's founder Jon Rathauser tells HealthyNation each patient is in an "adherence contest" against other patients. When they take their medication, they are thanked and told where they stand in the competition. High marks place a patient in the coveted "winners circle".

When a patient fails to verify that they have taken medication, they get texts and calls. Should the patient fail to respond to these, the clinic they attend is alerted, so that health officials can do a follow-up.

In partnership with Amref Health Africa, TAC Health Africa, an NGO, has placed a toll-free number (0800722206) which patients can call and get information about TB, including where they can seek care.