Botswana: About 1000 Wildebeests to Be Translocated 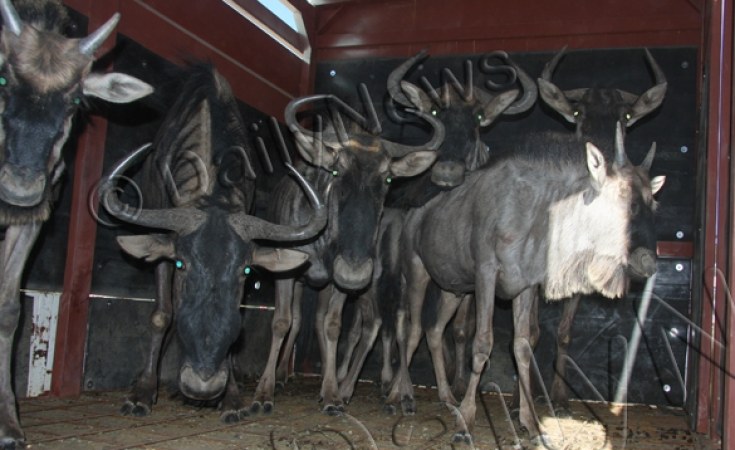 Kanye — Thirty black wildebeests have been translocated from Gasita/Lerolwane farming fields to Khutse Game Reserve in the Central Kalahari Game Reserve, where they will ultimately be released into their new home.

In an interview, wildlife biologist in the Ministry of Environment, Natural Resources Conservation and Tourism, Mr Kebonang Kebonang, said the wildebeests were moved as part of a conservation initiative to prevent them from coming into contact with cattle in that area.

The Department of Wildlife and National Parks' move to translocate the animals followed farmers' pleas whose cattle had died due to Malignant Catarrhal Fever (MCF) spread by the wildebeests.

He said over the past months farmers in Gasita/Lerolwane grazing fields had raised concerns over devastating deaths of a high number of their cattle as a result of the fever spread to cattle through contact with wildebeests.

Mr Kebonang said after receiving farmers' reports, they engaged the Department of Veterinary Services to carryout investigations, which confirmed that indeed, the wildebeests were carriers of the disease.

"There is no treatment and affected cattle have no chance of recovery. Currently, there is also no vaccines for MCF, and control relies on avoiding contact with wildebeest," he said.

He said in an effort to mitigate the possible human-wildlife conflict, they had resolved to translocate the wildebeests.

Mr Kebonang noted that they had identified about 1 000 wildebeests in commercial and communal farms around Gasita/Lerolwane area.

He shared that they had mobilised a team of 40 staff members from Department of Wildlife and National Parks (DWNP) to assist, adding that the operation was planned to be complete by end of July.

"We are being assisted by a helicopter through Kalahari Capture Team, but all other logistics are conducted by DWNP," he said.

He noted that they would first concentrate at Gasita pan to capture the animals and advised the community to be cooperative, vigilant and not to panic as the operation shall be close to the village.

Mr Kebonang also advised farmers to report any presence of wildebeests in the area at the kgotla as there were possibilities that they might not be able to locate all of them.

Gasita veterinary officer, Mr Ketsetswenabo Mmitsi said they had so far recorded 74 deaths of cattle since March this.

He said although the numbers had reduced over some weeks, it was a concern as farmers were worried about the welfare of their cattle as the wildebeests were still visible in the area.

He advised that it was crucial for farmers to ensure that they prevent contact of their cattle with the wildebeest.

Mr Mmitsi however appreciated the efforts that the ministry had taken in addressing the situation, adding that hopefully the disease would not recur in the coming years as the wildebeests would be removed from the area.

Africa Urged to Prepare for a Long Fight with COVID-19
Tagged:
Copyright © 2020 Botswana Daily News. All rights reserved. Distributed by AllAfrica Global Media (allAfrica.com). To contact the copyright holder directly for corrections — or for permission to republish or make other authorized use of this material, click here.