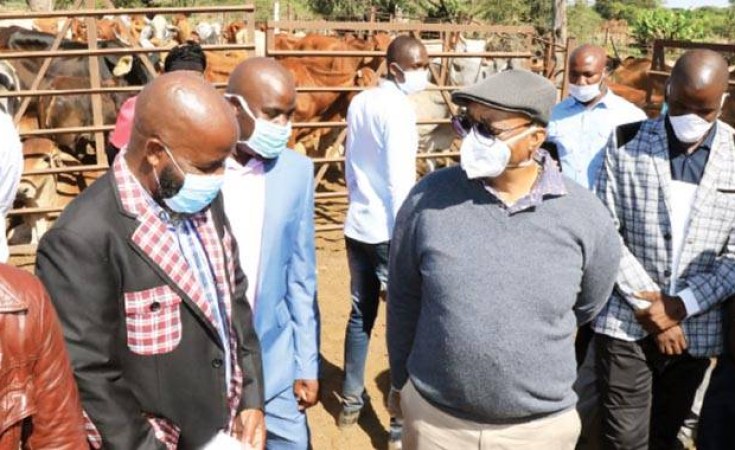 Tawanda Mudimu/The Herald
Vice President Constantino Chiwenga speaks to Niesbert Taguta during the launch of the Presidential Heifer Pass-on Programme and hand over of 194 heifers to beneficiaries in Middle Sabi.
The Herald (Harare)
By Rumbidzayi Zinyuke

One-hundred-and-ninety-four farmers who lost their cattle to Theileriosis (January Disease) in Masvingo and Manicaland will benefit from the Presidential Heifer Pass-on Scheme that was launched at Taguta Farm in Chipinge yesterday.

The scheme is part of the broader Presidential Livestock Inputs Support Programme, which was launched last week in Harare.

The 194 heifers are the first batch of 600 heifers bought by President Mnangagwa from Mutumwa Noah Taguta, which will be distributed to farmers in Buhera District in Manicaland and Gutu District in Masvingo.

Vice President Constatino Chiwenga said the scheme would contribute to the country's food security and nutrition in line with Vision 2030.

The Presidential Heifer Pass-on Scheme seeks to restore and guarantee household food security and nutrition to the vulnerable members of our society who lost entire herds of cattle to the dreaded January disease.

He urged farmers not to hold on to the heifers once they started producing calves but to pass them on to ensure continuity.

The programme would help farmers ensure full utilisation of available resources and mitigate the impact of the loss of livestock to disease.

Speaking at the same event, Minister of State for Manicaland Provincial Affairs and Devolution Dr Ellen Gwaradzimba said Manicaland and Masvingo were the worst hit provinces by January Disease and the programme would help affected families restore their livelihoods.

She urged farmers to take livestock production as a business and to be proactive in coming up with measures to save livestock from diseases without waiting for Government intervention, which could come late.

Lands, Agriculture, Water and Rural Resettlement Minister Perrance Shiri urged farmers to take advantage of such programmes to ensure food security and restore their livelihoods while contributing to the restoration of the national herd.

In 2018, President Mnangagwa launched the heifer pass-on scheme in Matabeleland North to allow farmers to recover from cattle losses inspired by drought.

Last Thursday he launched a piggery scheme in Harare under his Presidential Livestock Inputs Support Programme that will see beneficiaries getting two sows and a boar on a free loan. After the first litter, the beneficiaries are expected to pass the pigs to the next approved beneficiaries.

The scheme is meant to play a complementary role to other running livestock schemes covering cattle, goats, sheep, poultry and fisheries -- all launched in the recent past.

Pigs are known to produce litter in significant numbers if they receive the proper care and husbandry requirements, which means that the scheme will offer a "quick sustainable pathway to better livelihoods for the communities" as he aptly put it.

Meanwhile, Deputy Minister of Finance and Economic Development Clemence Chiduwa yesterday said Government would continue to provide funding for agricultural programmes that made a contribution to economic development.

He said agriculture had received a huge chunk from the $18 billion stimulus package unveiled by Government during the Covid-19 period.