Rwanda: COVID-19 Will Leave Us With Lessons - Kagame 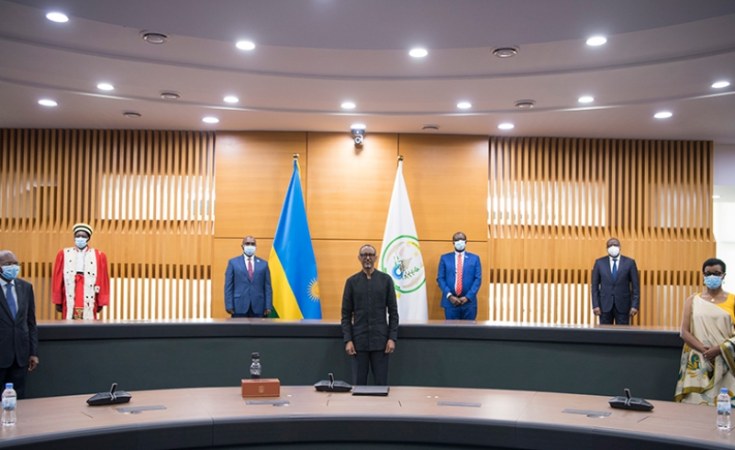 Village Urugwiro/New Times
President Kagame during the swearing in ceremony of new leaders which was held at Village Urugwiro on June 1.
The New Times (Kigali)
By Nasra Bishumba

President Paul Kagame has called on Rwandans, especially those in positions of leadership, to use the challenges and methods used in dealing with Covid-19 as an opportunity to learn lessons that will help in Rwanda's journey.

He was speaking on Monday, during the swearing-in ceremony of eight senior government officials - including two members of cabinet - which was held at Village Urugwiro.

Kagame reminded the leaders that while results-oriented leadership requires a high level of commitment and discipline, challenges like the current Covid-19 crisis make the responsibilities even heavier but offer learning opportunities.

"Difficult times such as these make your work even more challenging. It requires us to work in unconventional ways. But it also teaches us important lessons we can apply in difficult times or in normal times. There is no reason we will not prevail," he said.

Kagame comforted all Rwandans who were set to start working on Monday but couldn't due to sudden changes, and reminded them that hard decisions had to be taken to ensure their health first.

Government, through the Office of the Prime Minster, reviewed an earlier cabinet resolution that had announced the resumption of different activities on June 1, including taxi moto operations and inter-province travel.

Among the reasons was the identification of five new cases in Rusizi District on Sunday.

The travel restrictions which have been on hold for the past two months and a half, were extended until further notice.

"Things are not only dependent on a set date, it is also dependent on what happens in that time. When there are new developments, we have to re-evaluate if our predictions still stand. That is why we have chosen to take more time," he said.

Kagame thanked Rwandans and the leaders for their continuous cooperation in ensuring that Covid-19 pandemic is defeated and reminded them to continue working together to completely eliminate the pandemic.

Kagame urged the public officials who were sworn in to put public interests before their own.

He reminded them that as leaders, their priority should be nation building, and cautioned them against mixing personal interests with their professional duty.

"All of us leaders should always uphold that when it comes to fulfilling our duties in public service, we should not confuse our own interests with that of the country," he said.