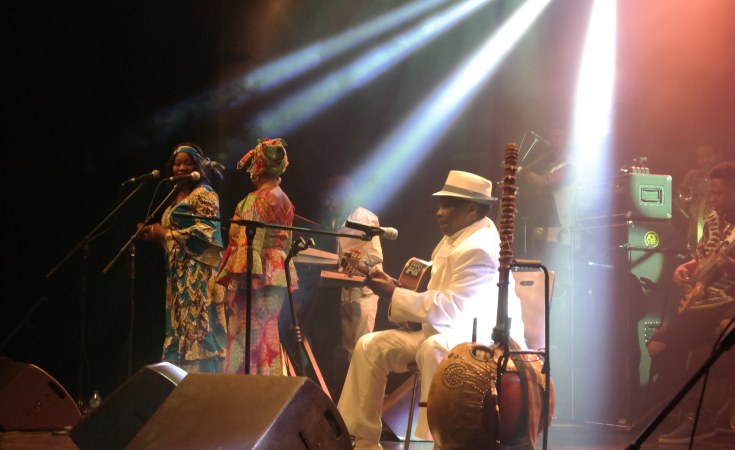 Guinea is in mourning. Mory Kanté, who passed away from chronic health problems at 70, was one of Africa's most influential and legendary artists of the late 20th century.

He was best known for his 1987 dance hit Yéké Yéké, which sold over a million copies and continues to liven global dance floors in a myriad of remixes. No other musician from Guinea has reached international audiences on the level of Mory Kanté. Even though his recorded output would dwindle, his live performances remained superb - and for Guineans, he was, and will always be, a hero.

Kanté was a composer and multi-instrumentalist with a singing voice of heart-rending beauty and an individual style on the kora, the West African harp. He was a griot of the Mande people of upper Guinea.

His hit was a reworking of a traditional Mande tune Yékéké. During a long interview in 1997, I asked how close it was to the traditional. He said, "All good things have many owners. But careful, because Yékéké and Yéké Yéké are not the same. Just one syllable changes everything - the feeling, the ambience. This was my invention."

And indeed Yéké Yéké has a hard edge, a driving rhythm, and a relentless disco back beat, the sound of 1980s global pop.

The music of the villages

Reworking this particular song is an example of Kanté's genius. While audiences around the world danced to the driving beats, few realised what it was about.

Yéké Yéké celebrates nimògòya, the teasing relationship between a wife and her brother in law (nimògò). As he explained, when one brother dies, according to local Islamic custom, the other will inherit his wife. Nimògòya acknowledges that tradition by giving in-laws license to flirt innocently. By extension, young people use it as a term of endearment. Yéké Yéké is an onomatopoeic word for the sound of dancing.

Yéké Yéké's commercial success encouraged record companies to back African artists, playing an important role in raising the profile of African popular music - coinciding as it did with the height of the "world music" craze with its epicenter in Paris.

On stage Kanté performed like a rock star, his kora slung over his shoulder, dressed from head to toe in white, his trademark look. But there was much more to him.

He was deeply immersed in the Mande griot tradition. Griots are hereditary musicians and storytellers or jeli. He always acknowledged griot culture as his main inspiration. As an artist he was restless and ambitious, always looking for new ways of playing the old music meaningfully.

You know, I went to three schools: the white man's school, the Koranic school and the griot school... but [the griot school] was the most intensive training I had. The griots are anti-tribalist ... they're the opposite of racist. The griot is there for the people.

Kanté was born in 1950 in the village of Albadaria in south west Guinea into a distinguished line of griots on both sides of his family. His grandfather, chief of the griots of Kissidougou, went everywhere with a giant orchestra.

Up to sixty singers and balafonists; this is where I got my ideas for doing things on a large scale!

On his father's side, the Kantés were blacksmiths who had turned musicians. The balafon, the wooden xylophone with 18-22 keys, was their instrument, though they also played acoustic guitars, transferring the interlocking techniques of the balafon onto the guitar strings.

His father, El Hadj Djeli Fodé Kanté, was apparently 67 when Mory was born, one of 38 children to several wives. They say even before the little Kanté could walk and talk he was dancing and singing. By three he was playing the balafon "like a little machine".

The 1950s in Guinea was a period of intense musical creativity, connected with the growing spirit of independence. Guitar and balafon played an important role in the pioneering of local pop music here and in neighbouring Mali, where Kanté was sent in his early teens to stay with family.

He began playing on the wedding circuit, so young he had to stand on a table to perform with his uncles, the Twins of Lafiabougou, who were in great demand. They performed a popular style called Apollo (named after the space mission.

It was futuristic music. No one believed the space ships would ever reach the moon. Only the griots knew ... because the griots understand man's potential.

Bewitched by the kora

While performing, Kanté hung out with the son of one of the great kora players, Batourou Sekou Kouyaté. The kora was not the young Kante's instrument, he'd never even touched one, but it bewitched him.

We would wait until the old man had gone into town, then run for the room where he kept his kora. His wife pretended not to notice ... I tried to play my balafon and guitar riffs on it. Nobody taught me. That's how I created my own style.

In 1970, Kanté returned to Guinea where he performed with the Ensemble Instrumental National. Before long he became lead vocalist of Mali's newly formed Rail Band, one of the great West African orchestras of the 1970s.

But the economic and political situation in Mali saw Kanté relocate to Abidjan. He started playing the kora in a restaurant called Le Climbier, and formed an ensemble of traditional instruments that played Cuban and American hits.

This was the exact opposite of the norm, where musicians were playing local music on Western instruments. Some big stars began dropping by - including Johnny Pacheco of Fania All-Stars and soul singer Barry White. Kanté was signed by American label Ebony Records and recorded his first international album, Courougnegne.

In 1984 Kanté moved to Paris and recorded the album Mory Kanté à Paris, including his first take of Yéké Yéké, in a funky Afrobeat style. Before either Salif Keita or Youssou N'Dour had made their breakthroughs, Kanté became the darling of the French rock scene. Signed up by Barclay in 1985, he recorded 10 Cola Nuts, produced by ex-Springsteen keyboard player David Sancious.

Horn arrangements and fuzz guitars had given way to a disco back beat and keyboards. This album features his only acoustic song, the haunting Parole De Griot with ethereal female chorus and two intertwined koras. It was the inspiration for South African group Bayete's hit Mmalo We.

The 1987 album Akwaba Beach contained the version of Yéké Yéké that enabled stardom. Between 1990 and 2001 Kanté released four albums modelled on the same sound but the world music industry had moved on. Sabou in 2004 was his only attempt at an all-acoustic album, and though lovely did not quite capture the flow and emotional power of the artist performing live.

He had hopes of recording a revival album with the Rail Band, but ill-health and lack of finances got in the way. And then death.

As the old adage says,

Every time a griot dies it's as if a library has burnt down.