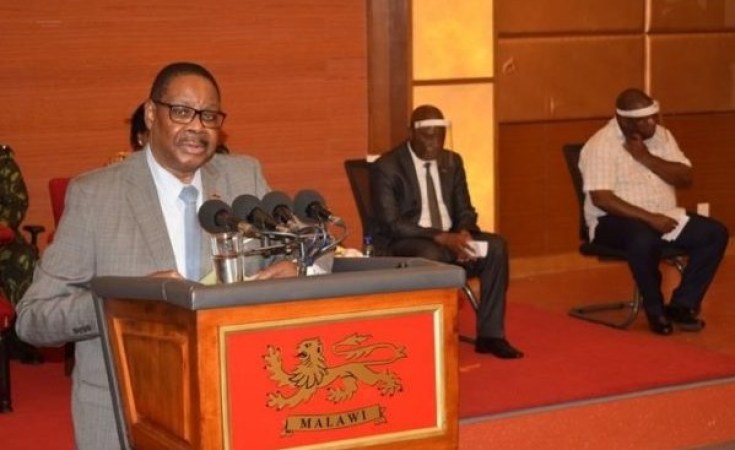 President Peter Mutharika has dismissed the call by Malawi Congress Party (MCP) presidential candidate Lazarus Chakwera, who is also Tonse Alliance torchbearer, to a debate ahead of the Constitutional Court sanctioned fresh presidential election , saying the two are not at the same level to debate.

Mutharika said this on Monday when he joined the hunt for votes, holding campaign meetings at his home trading centre of Goliati then Thyolo Boma and Bvumbwe, his first major public appearance since presenting his nomination papers on May 7.

"Chakwera wants to hold a debate with me, if he wants to, then he should not debate with me, but [Charles] Mchacha, [Kondwani] Nankhumwa or [Mary] Navicha. I am not on the same level with him," said Mutharika who is seeking a second and final term of office.

President Mutharika expressed optimism that he would win the fresh elections.

Mutharika pointed out that the numerous development programmes government has been implementing across the country, including community technical colleges, construction of both primary and secondary schools and youth empowerment were some of the reasons people would re-elect him in power.

"I draw my confidence from the fact that over the first term of my office, we successfully carried out a number of development programmes aimed at uplifting people's livelihoods especially those in rural areas," he said.

The President added that he has made deliberate efforts to empower the youth, noting that 50 per cent of his cabinet comprises youthful members.

"In fact, I chose United Democratic Front (UDF) leader, Atupele Muluzi as my running mate in the fresh presidential election in the spirit of sustaining the agenda of youth empowerment," he said.

"I have a burning desire to improve the welfare of youth in the country. Out of 30 cabinet ministers in my government, about 14 are youth. I will continue all programmes on youth socio-economic empowerment," he said.

The Malawian leader asked Malawians to turn out in their large numbers and vote for him and his running mate during the proposed June 23, 2020 elections in a bid to prove the courts and the opposition that the Democratic Progressive Party (DPP) won the polls.

"I am repeating that the DPP won the May 21 elections which both local and international observers described as free, fair and credible. We should come out in large numbers to prove High Court Judges that their ruling was not the will of the people," he challenged.

"Don't make any mistake of voting for Lazarous Chakwera of Malawi Congress Party and the Tonse Alliance," he warned.

Mutharika assured people in Thyolo that once re-elected, his administration would continue with the development projects initiated in the district, citing upgrading of some feeder roads such as Chingazi-Nansadi, Nang'ombe-Bvumbwe and Katundu-Thunga, among others.

Vice President for the DPP in the South, Kondwani Nankhumwa said Mutharika and his running mate Muluzi would win resoundingly.

"Your leadership has demonstrated that you're very tolerant and a true champion of democracy despite being pushed to the limits by some disgruntled people operating under the cover of human rights defenders when in actual fact they are political hooligans," he said.

"The fresh presidential election gives us an opportunity to maintain sustainable development and respect of people's lives, not to elect a crocodile and cruel party (MCP)," he said.

The country is expected to go to the polls again on June 23 2020 following the Supreme Court decision to uphold the Constitutional Court's ruling that nullified the May 21 2019 presidential election.

Millions of Malawians Vote in Rerun of 2019 Presidential Poll
Tagged:
Copyright © 2020 Nyasa Times. All rights reserved. Distributed by AllAfrica Global Media (allAfrica.com). To contact the copyright holder directly for corrections — or for permission to republish or make other authorized use of this material, click here.

Are We Africans Our Own Worst Enemy?
Corruption